The Romanian Government notified, on Friday, the Court of Justice of the European Union (CJEU) with three actions in the annulment of the problematic Mobility… END_OF_DOCUMENT_TOKEN_TO_BE_REPLACED

The Ministry of Public Finance (MFP) proposes to regulate a simplified alternative procedure for granting a payment rescheduling of up to 12 months, for the… END_OF_DOCUMENT_TOKEN_TO_BE_REPLACED

Romania’s economy will contract by 4.8% of GDP this year, according to the revised forecast of the International Monetary Fund (IMF), a slightly more optimistic… END_OF_DOCUMENT_TOKEN_TO_BE_REPLACED

Equation of public employees in Romania’s expenses compared to EU 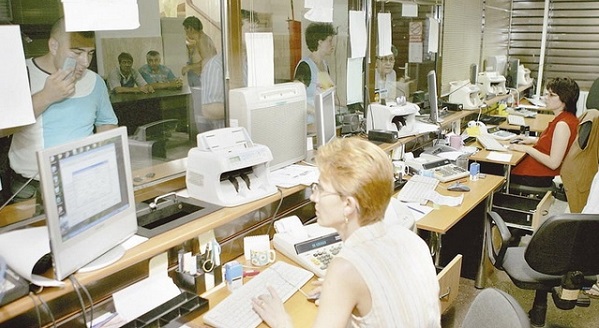 Simply put, data recorded over time in the monthly budget implementation published by the Ministry of Finance indicate a share of staff costs in total budget expenditure somewhere around 20% after the decrease forced by circumstances (to be read the need for budgetary adjustment) during the crisis period, about 25% afterwards, and an increase toward 30% at present after a slight rebounding below 27% in 2018.

With the current collection rate, raising taxes is inevitable

Obviously, if the share of 20% registered during the crisis was not enough, neither the 30% reached now can be sustainable in the context of a budget revenue collection around 70% of EU standards (as a share of GDP).

We recall that reporting is made at the level of expenditure in GDP, at around 35% of GDP, well below the level of over 45%, the European average, as we ultimately talk about the level of budget money collection.

By a simple arithmetic correlation, if we want to go with the expenses with wages in public sector above the 10% of GDP threshold (level of 7% of GDP was recommended during the crisis, given the budget capabilities at that time), which would not represent a big value from the European perspective, then we should also increase the expenditure to 42% of GDP (if we apply the rule of three).

On the same logic, we will also have somehow to comply with budget revenues above 40% of GDP, which implies an increase in the level of taxation (beyond the eternal promise, desirable and less fulfilled, of increasing the collection rate).

Otherwise, we cannot go on a long-term basis both with revenues between 32% and 33% of GDP (the collection rate compared to the EU average of 42%), and the part representing the salaries in the public sector at 30% in order to obtain in the end the level of 10% of GDP (some even say that will be about 11% in 2019).

50% pay gap between public and private sector will not work

An important indicator that shows the major problem of wage strategy at the level of the whole economy is the atypical positioning between the EU states in terms of the ratio between salaries in the public sector and the competitive sector.

Please note that we have not mentioned yet the data for 2017 because they are not comparable due to the transfer of social contributions from the employer to the employee and the statistics are accurate including in the education sector (where 4.6% of the personnel work in the private sector) and health and social assistance (12.5% ​​of personnel in the private sector) and, beware, do not include salaries for armed forces and personnel treated as such (MapN, SRI, MAI, etc.). Incidentally, if we also include them, the budget/private ratio would go up to + 50%.

Of course, given that the public sector is a market-maker on the Romanian labour market and drags wages in the private sector along with it, it is quite difficult to say why wages in the private sector would have to be held back by about seven percentage points below the national average, while in the public sector the level goes with + 35% over the same average, while the relative differences will systematically increase in nominal terms.

It should also be noted that increases in the public sector will be halved in percentage terms in three years after 2019, despite the expectations raised, and the official forecast sees a timid relative rebound of the wage growth in the private sector only around 2021-2022 and we are still to see how it will actually translate into reality.

It is certain that a 45-50% gap between the public and private sector in terms of payroll will be very difficult to maintain for a simple reason: No one, anywhere in the world, can work that way, as benefits of job stability and long-term careers are much clearer in the budget sector.

However, we do NOT have too many employees in the public sector

In the context, it can be claimed that we have too many employees in the public sector and that salaries in this sector can be maintained by decreasing the numbers of employees:

Nothing is more false, according to the same European customs. Eurostat’s infographic in the field is as clear as possible, with Romania ranking by far last in the EU in terms of the budgetary staff share. 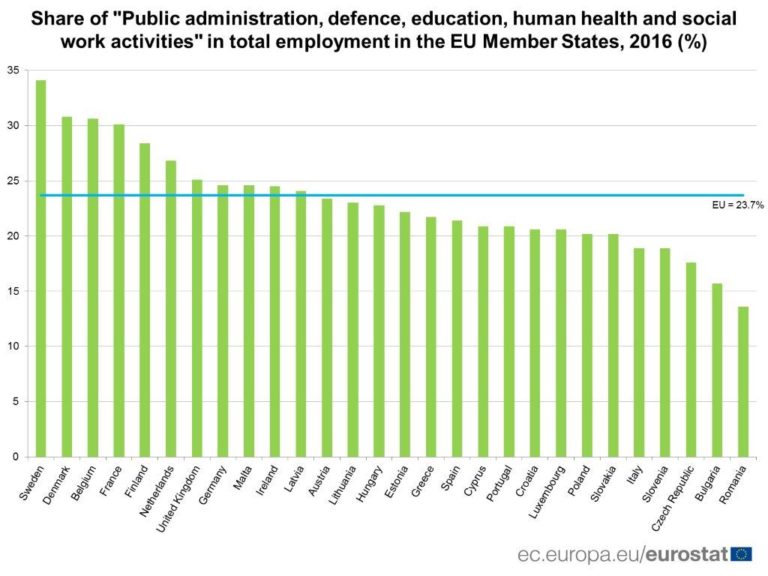 Contrary to a cliché already set in the common consciousness (perhaps to channel dissatisfaction with the quality of public services), instead of decreasing, the number of state employees will have to increase. And not in any way, but by about 50% if we want to move toward the EU average to which Hungary got close, or at least by a third, to align ourselves with the 20% achieved by Poland.

We are not talking here about developed and super-technological northern states, where no one is wondering why over 30% of employees work in the budgetary sector (Sweden, Denmark, Belgium or France). And where the link between the human factor involved (with related costs) and the quality of social services is obvious.

More seriously, we also have relatively few employees, with an employment rate of the working age population just reaching close to the 70% threshold, while the reference country Sweden has exceeded 80%. In other words, if we have had more employees, we would have needed even more public sector employees, in order to maintain European proportions.

Of course, not necessarily with the same occupations and productivity as at the present, with improvements in the selection and structure of the activity. Which should be adapted, the same as the number of employees in the public sector, to the population’s needs and not the personal needs or all sorts of sinecures. Situated still in too many cases, by the model of the socialist period, when PCR was in power (PCR as in the Romanian acronym for “Connections, Acquaintances, Relationships”).

Luca de Meo (foto), the new general manager (CEO) of Renault group, considers that Dacia project proved to be a miracle and that no one… END_OF_DOCUMENT_TOKEN_TO_BE_REPLACED

A former Soviet airbase in central Romania could become a hub for US Air Force operations in south-eastern Europe, where the Pentagon is seeking to… END_OF_DOCUMENT_TOKEN_TO_BE_REPLACED

Nuclearelectrica's Board of Directors has been mandated to initiate proceedings to terminate negotiations with China General Nuclear Power Group (CGN), as well as legal effects… END_OF_DOCUMENT_TOKEN_TO_BE_REPLACED

Romania imported an amount of electricity of almost 796 GWh in the first month of this year, by more than 36% above what it exported… END_OF_DOCUMENT_TOKEN_TO_BE_REPLACED

GFG Alliance has committed to invest one billion euros to upgrade Galati steel plant in order to reduce emissions and increase production. Another EUR 1… END_OF_DOCUMENT_TOKEN_TO_BE_REPLACED

The Transport Ministry, as the Intermediate Body in Transport, approved the financing request for the project "Construction of Sibiu - Pitesti highway", Sections 1, 4… END_OF_DOCUMENT_TOKEN_TO_BE_REPLACED

Lack of trust in authorities, corruption and low living standards are the main reasons why young people leave Romania. The data is part of a… END_OF_DOCUMENT_TOKEN_TO_BE_REPLACED

Romania is the EU country with the fewest cars in terms of the number of inhabitants, according to data recently published by Eurostat. We appear… END_OF_DOCUMENT_TOKEN_TO_BE_REPLACED

The Government is preparing the public for the first measures aimed at avoiding the budget slippage, which would be applied by the PSD-ALDE government. News… END_OF_DOCUMENT_TOKEN_TO_BE_REPLACED

French Prosecutor Jean-Francois Bohnert will be appointed as head of the European Financial Prosecutor's Office, a position for which he was heard on Thursday, 11… END_OF_DOCUMENT_TOKEN_TO_BE_REPLACED

Romania recorded the highest road deaths in the EU also last year, with 96 deaths per one million inhabitants in 2018, almost double the EU… END_OF_DOCUMENT_TOKEN_TO_BE_REPLACED

Sorina Pintea announced on Thursday further new changes that will be brought to the functioning of the health care system, including new rules for employment… END_OF_DOCUMENT_TOKEN_TO_BE_REPLACED

The new order on approval and selection procedures for insolvency practitioners is an important step to a very good direction, industry experts say. ANAF is… END_OF_DOCUMENT_TOKEN_TO_BE_REPLACED