„Effect of wealth” increases savings and investment in parallel with consumption

The increase of the available income and the wealth effect induced by that have stimulated not only the consumption but also the saving among the population, as well as personal investments in the last two months.

Following the increase in the net average wage by 14.5% in May, year-over-year, consumption sped up again (+ 14% versus + 4.8% in April) while the amounts the population placed in bank deposits, respectively in investment funds, also increased.

Deposits of the population increased by 10.1% in May compared to the same month in 2016, according to the BNR data.

Net subscriptions to investment funds returned to the positive range in May and June, after the consumer appetite had been overwhelming in previous months, and investors had withdrawn more money than placed, according to the Association of Fund Managers (AAF).

Both consumption and saving are stimulated not only by the actual increases of amounts in personal accounts but also by the so-called wealth effect they have on the human behaviour, which boosts the appetite for spending and saving.

„The volume of retail sales has been reinvigorated in May, driven by the increase in the real disposable income of the population, the wealth effect, the consumer credit growth, and low international oil prices”, according to a report by Transilvania Bank.

The wealth effect, driven by the feeling that there is more money available, also works in the investment field.

„Obviously, as the disposable incomes have increased, it is natural for some of them to also be directed to savings, in deposits, as well as to investments in funds,” explained Dan Popovici, General Manager of OTP Asset Management.

„Subscriptions to investment funds are generally stimulated by financial education, income levels and yields offered. We are in a favourable context for the investment fund market, as average incomes have increased in recent years, and historical yields of funds are attractive if compared to traditional savings. Even if we see an advance in consumption, the three factors together contribute, among other things, to the growth of the investment fund industry,” said Aurel Bernat, General Manager of BT Asset Management.

Money has been found also for personal investment

June has confirmed the resumption of the growth trend in savings placed in personal investments, registered in May. Investment funds had recorded higher outflows than inflows from February to April.

Savings that Romanians placed in the investment funds active in our market were, in June, by more than 266 million lei (over 58 million euros) higher than the amounts withdrawn, according to the Association of Fund Managers (AAF).

The volume of personal investments is far lower than bank deposits, which exceeded 167.7 billion lei in May, but the trend confirms the existing potential.

The positive difference between investment and withdrawals in June (net subscriptions) was 63% higher than the negative subscriptions in February, March and April. 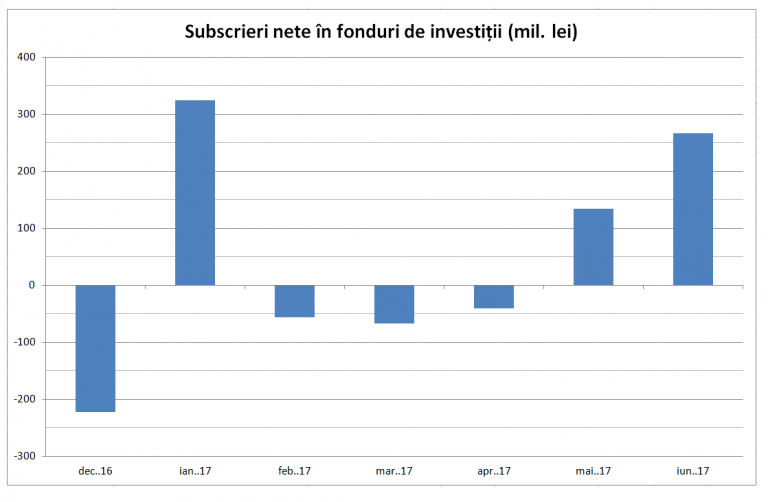 However, net subscriptions of 560 million lei (123.5 million euros) in the first half of 2017 are only 31% of those in 2015, meaning the period before the wave of wage increases and tax cuts that have stimulated consumption in the past and this year.

Mutual funds represent 99% of the money, and those managed in Romania over 80%.

Most of the money (in net subscriptions) have been attracted by mutual investment funds with placements in bank deposits and bonds, especially in foreign currency, which suggests that much of the money comes mainly from people with incomes in foreign currency, clients of private banking services. Investors are unlikely to convert savings into lei.

Top of preferences for mutual funds by net subscriptions 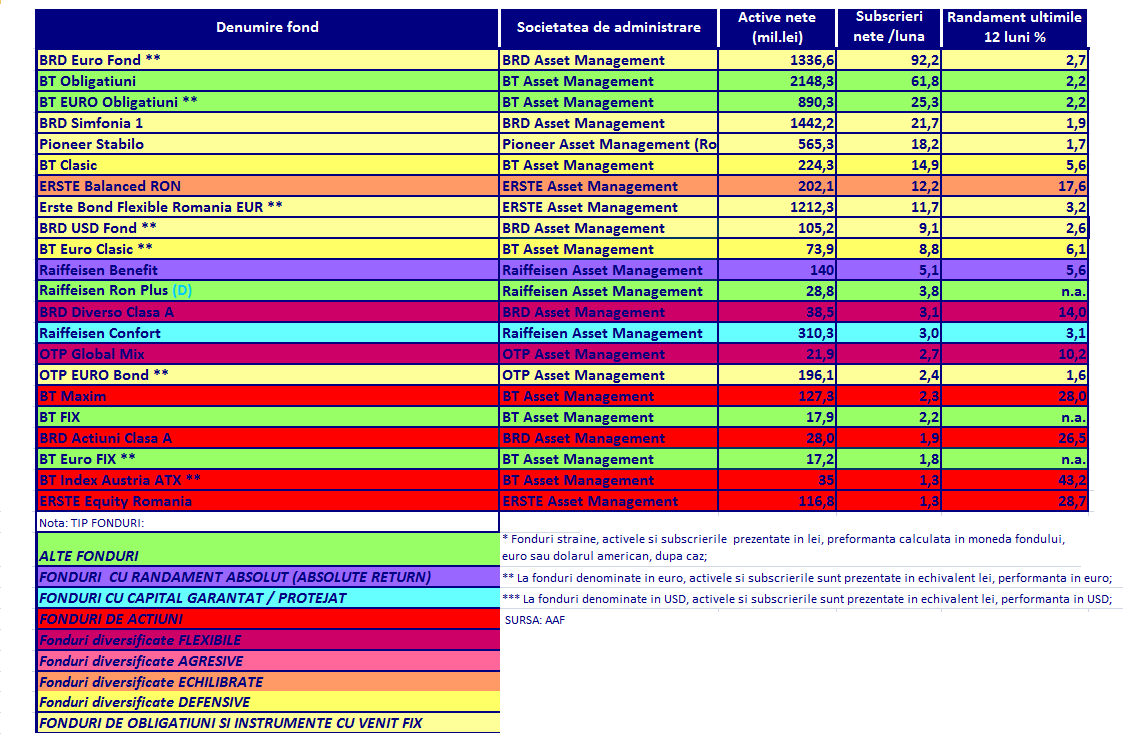 Overall, funds in fixed income instruments are in top subscriptions, despite the low yields below 4%.

The risk aversion of saving – investors prevented them from taking advantage of yields up to 43% over the past 12 months.

The degree of use of saving and investment products by the population is low compared to the overall saving level, although it is comparable to the average of the countries in the region.

The total volume of bank deposits of the population increased more than 3.5 times over the past 10 years, reaching almost 168 billion lei in May 2017, and amounts to 20% of the GDP forecasted for this year.

Romanians own just the equivalent of 5.5% of GDP in investment funds, three times less than Poles or Hungarians, according to the investment managers.