GFG Alliance has committed to invest one billion euros to upgrade Galati steel plant in order to reduce emissions and increase production. Another EUR 1… END_OF_DOCUMENT_TOKEN_TO_BE_REPLACED

The transition to a green economy needs to be supported by new, additional European funds, distinct from Romania’s allocations from the future EU multiannual budget.… END_OF_DOCUMENT_TOKEN_TO_BE_REPLACED

Romania fell 3 places to the 10th position in the ranking of largest investments made by the European Bank for Reconstruction and Development (EBRD), after… END_OF_DOCUMENT_TOKEN_TO_BE_REPLACED

The Transport Ministry, as the Intermediate Body in Transport, approved the financing request for the project “Construction of Sibiu – Pitesti highway”, Sections 1, 4… END_OF_DOCUMENT_TOKEN_TO_BE_REPLACED

DNA is investigating how the two ordinances have been drafted. Tough reaction of Ministry of Justice 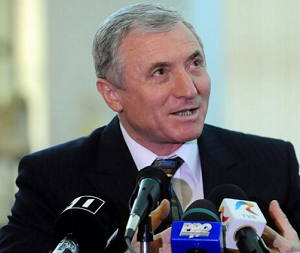 UPDATE 13.30: DNA confirmed, adding that it is only about procedural acts carried out following a complaint, as required by law.

If the act is not confirmed, the case will close, if there are indications, it will go further.

“At the National Anticorruption Directorate, a complaint filed by several individuals has been registered about possible acts that fall under the institution’s competence for resolution, related to the way of adopting certain legislation. Therefore, in accordance with the criminal procedure, procedural acts are carried out on the issues brought before the DNA. Please note that when circumstances permit, we will be able to provide further details.”

UPDATE 10.57: The Ministry of Justice confirmed Wednesday in a press release that it has received a request from DNA to transmit the originals of all documentary evidence related to the drafting and issuance of the emergency ordinance on amending the Criminal Code and the Criminal Procedure Code and the draft law on pardon:

“Yesterday, 1 February 2017, the Ministry of Justice has been requested by the National Anticorruption Directorate – Department for combating crimes assimilated to corruption offenses – to hand over by 2 February 2017, the original of all the documents related drafting and issuance of the Government Emergency Ordinance of 31 January 2017, which amended and supplemented Law 286/2009 on the Criminal Code and Law 135/2010 on the Criminal Procedure Code, as well as the draft law adopted by the Government on granting pardon for some sentences.

By the same notification, the National Anticorruption Directorate has requested the documents – resulting from the interinstitutional and internal correspondence, written or electronic mail, on the two pieces of legislation mentioned, and the full names and identification data of persons who participated in the drafting, preparation and/or endorsement of the two draft laws.

According to the notification, the documents have been requested for the proceedings conducted in a case pending before the National Anticorruption Directorate.”

In the statement, the Ministry strongly criticizes the action of DNA:

We consider that triggering an investigation by the DNA on the drafting of an emergency ordinance is a serious interference in the work of the executive authority and an unprecedented impairment of the constitutional balance of powers.

Also, the press release reads that “the Ministry of Justice states that it does not envisage the reorganization of the National Anticorruption Directorate and the Directorate for Investigating Organized Crime and Terrorism and rejects all the information recently circulated in public on this issue.”

The General Prosecutor of Romania Augustin Lazar announced Thursday morning that there is a DNA investigation underway on how the draft law on pardon and the ordinance amending the criminal codes have been drafted.

Asked at the entrance of the CSM building whether any such investigation exists, Lazar confirmed the news on sources that was already circulating on Wednesday evening, but declined to offer further details:

“There is a DNA investigation and please address to the press office of the DNA for further information. It needs to be precise information and not me saying things that are not rigorously accurate. (…) There is a pending case before the DNA somehow related to that,” said Augustin Lazar before the meeting of the Superior Council of Magistracy.

The investigation has been opened based on a preliminary complaint.

It is recalled that the Government adopted Tuesday night an ordinance amending the Criminal Code and the Criminal Procedure Code and a bill on the pardon. The first document has been published immediately after the approval and the draft law sent to the Parliament.

Negligence in office, the same as in the original version, is totally decriminalized.

The Government has maintained the prejudice threshold of 200,000 lei, below which there is no criminal offense, but just the administrative and disciplinary sanction, plus the recovery of the prejudice.

The ordinance also maintained lower penalties (the upper limit is now three years, instead of five years, as stipulated in the former version) and dropped the requirement for the criminal proceedings to be triggered following the complaint of the injured party.

How the article on the abuse of office looks like:

Another provision that endangers many pending cases and has been preserved in the emergency ordinance published in the Official Gazette refers to the denunciation and amends the Criminal Procedure Code – the denunciation may be filed only within 6 months from the date of the offense.

The big novelty of the ordinance has been announced right in the press conference Tuesday evening:

It has been decriminalized the abuse of office “when issuing, approving or adopting pieces of legislation”, which means that for the liability is discharged for all high and middle-level public officials who have the power to issue, approve or adopt regulations.

An identical situation was for the offense of favouring the perpetrator, which no longer exists “for the cases of issuing, approving or adopting pieces of legislation“.

Consequently, Grindeanu government would not be held responsible for the draft legislation in the justice areas if the emergency ordinance took effect, no matter if the action exists.

Liviu Dragnea will no longer benefit from the pardon unless the bill will be amended in the Parliament, because the draft adopted by the Government extended the list of exceptions and included the corruption related offenses. Dragnea received a suspended sentence for such charge in the “Referendum” case file:

“A person holding a leadership position in a political party, trade union or employer association or within a legal non-profit entity, who uses the influence or authority for obtaining for himself or another person money, goods or other unfair advantages, shall be punished by imprisonment for one to five years.”

His only chance to become prime minister is for the CCR to declare unconstitutional the provision of Law 90 that does not allow convicted persons to become members of the Government.

Also, as the provision regarding the diminishing by 1/2 of the penalty that benefited people over 60 years, regardless of the offense, there is no longer possible for criminals, rapists, Dan Voiculescu, Alexander Visinescu, defendants from the “Revolution” and “Mineriada” case files to get out of jail under the Law on pardon.

Now, only pregnant women and people who are sole breadwinners with dependent minors aged up to 14 can be granted a reduction by half of the sentence or a pardon. The first version included the persons aged over 60 and stipulated a maximum age of only 5 for children.

Also, the bill added a new provision that does not allow granting pardon to people convicted of crimes where the penalty provided for by law exceeds 10 years, even if the offense is not on the list of exceptions from the bill on the pardon.

The conflict of interests and intellectual forgery are also exempted from granting the pardon.

The offenses stipulated in Law 78/2000 on corruption and abuse of office have also been added to the list of offenses excepted from the pardon.

It should be recalled that the Government approved on Tuesday night an ordinance that amends the Criminal Code and the Criminal Procedure Code and a bill on the pardon.

The ordinance has been published in the Official Gazette on Wednesday at 01:00 but stipulates a 10-day interval before some of the provisions effectively enter into force.

The Law on pardon has been submitted to the Senate on Wednesday morning.

GFG Alliance has committed to invest one billion euros to upgrade Galati steel plant in order to reduce emissions and increase production. Another EUR 1… END_OF_DOCUMENT_TOKEN_TO_BE_REPLACED

The Transport Ministry, as the Intermediate Body in Transport, approved the financing request for the project "Construction of Sibiu - Pitesti highway", Sections 1, 4… END_OF_DOCUMENT_TOKEN_TO_BE_REPLACED

Lack of trust in authorities, corruption and low living standards are the main reasons why young people leave Romania. The data is part of a… END_OF_DOCUMENT_TOKEN_TO_BE_REPLACED

Romania is the EU country with the fewest cars in terms of the number of inhabitants, according to data recently published by Eurostat. We appear… END_OF_DOCUMENT_TOKEN_TO_BE_REPLACED

The Government is preparing the public for the first measures aimed at avoiding the budget slippage, which would be applied by the PSD-ALDE government. News… END_OF_DOCUMENT_TOKEN_TO_BE_REPLACED

French Prosecutor Jean-Francois Bohnert will be appointed as head of the European Financial Prosecutor's Office, a position for which he was heard on Thursday, 11… END_OF_DOCUMENT_TOKEN_TO_BE_REPLACED

Romania recorded the highest road deaths in the EU also last year, with 96 deaths per one million inhabitants in 2018, almost double the EU… END_OF_DOCUMENT_TOKEN_TO_BE_REPLACED

Sorina Pintea announced on Thursday further new changes that will be brought to the functioning of the health care system, including new rules for employment… END_OF_DOCUMENT_TOKEN_TO_BE_REPLACED

The new order on approval and selection procedures for insolvency practitioners is an important step to a very good direction, industry experts say. ANAF is… END_OF_DOCUMENT_TOKEN_TO_BE_REPLACED

Romania lost to Estonia in the final vote to get the non-permanent member position within the UN Security Council for the period 2020-2021. On Friday,… END_OF_DOCUMENT_TOKEN_TO_BE_REPLACED

eMAG hopes to get the opinion of the Hungarian Competition Council over the next two months for the acquisition of Extreme Digital, the market leader… END_OF_DOCUMENT_TOKEN_TO_BE_REPLACED