Development? Jobs came back to 2008 level: but they are of poorer quality - CursDeGuvernare.ro

Development? Jobs came back to 2008 level: but they are of poorer quality 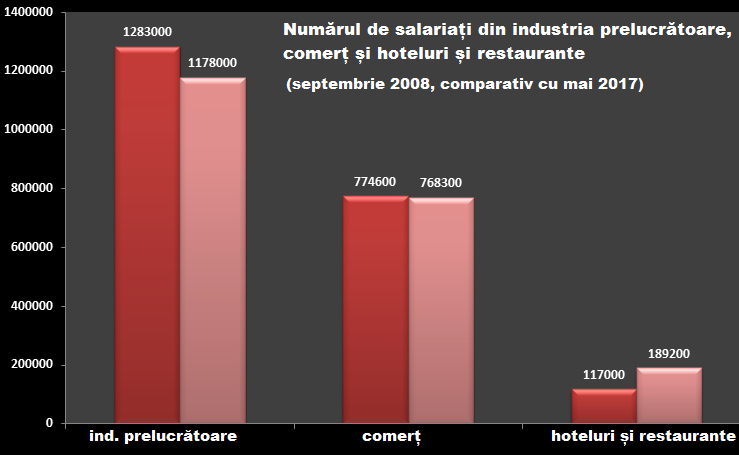 In May 2017, the number of employees in Romania returned to the level recorded at the beginning of the great recession – September 2008.

Since the start of the crisis, Romania has lost almost 740,000 jobs, by May 2011, the month with the lowest number of employees – 4,095 million employees with an employment contract (fixed or indefinite).

Jobs recovered differently depending on the economic activity and the analyses shows that job creation was more accelerated in consumption-related segments (trade, hotels and restaurants) than in the manufacturing industry.

As a matter of fact, in trade, hotels and restaurants, sectors with low paid and very unsafe jobs (the first to disappear in a possible new crisis), the recovery was complete overall, while in the manufacturing sector the number of employees still did not reach the level registered before the crisis.

There have been some significant staff increases in high value-added activities in the manufacturing industry:

As for the other fields, though, the staff increased in:

Manufacturing activities where jobs lost in the crisis have not been recovered:

Increases: in trade, hotels and restaurants

While the manufacturing industry still has to recover what it lost during the crisis, these two sectors, trade and HORECA together exceeded the number of employees they had in 2008.

Also related to the consumption increase, the number of employees in the entertainment, cultural and recreational activities increased – from only 39,800 in September 2008 to 65,100 in May 2017.

Evolution of the number of employees in other areas: