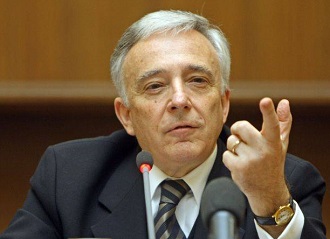 And the estimates for the first two quarters have increased from 3.9% to 5%, but inflation will return to the targeted range of 2.5 ± 1% by the end of the year, emphasised Mugur Isarescu, BNR Governor, at the presentation of the Inflation Report, published on Friday.

„Ending this inflationary surge has the effect of this indicator returning within the target range as of Q4/2018,” the governor of the central bank also said.

To the temporarily excess over the upper threshold in 2019 it could contribute not only to the „gradual increase in companies’ expectations regarding the inflation”, but also „the aggregate demand surplus expected to maintain against the background of the stimulating characteristic, although on a declining trend to neutral values, of the real monetary conditions,” says the BNR report.

The BNR is struggling with the inflation expectations, worse from the economic operators than bank analysts.

The Governor of the National Bank of Romania says that although on the inflation chart „the humpback got at the highest level” and „we have a 5% projection that extends until the summer”, that does not mean the National Bank announces that prices will rise. 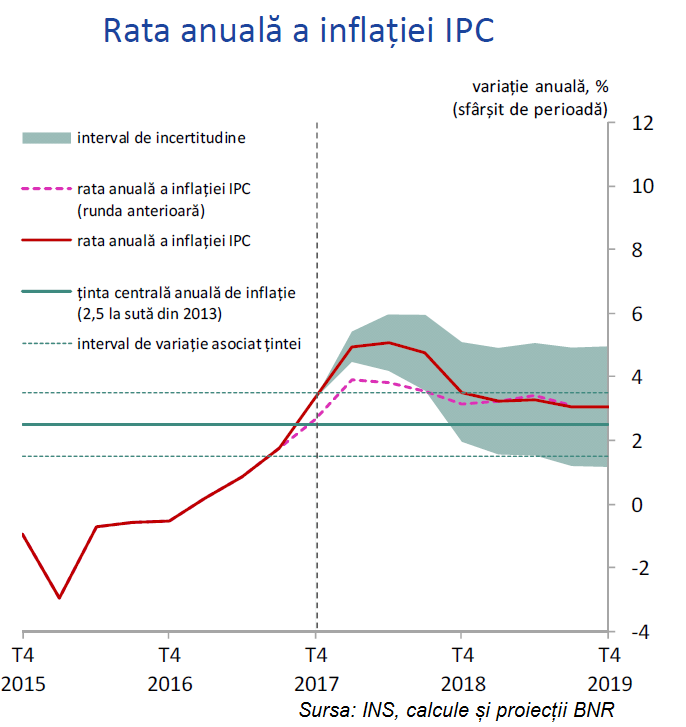 With the data on rising inflationary pressures ahead, BNR administrators had already decided on Wednesday to raise the monetary policy rate to 2.25% per year from 2.00%, as of February 8, 2018.

All product sectors contributed to the inflation increase, respectively to the revision of the BNR forecast, but most of all: 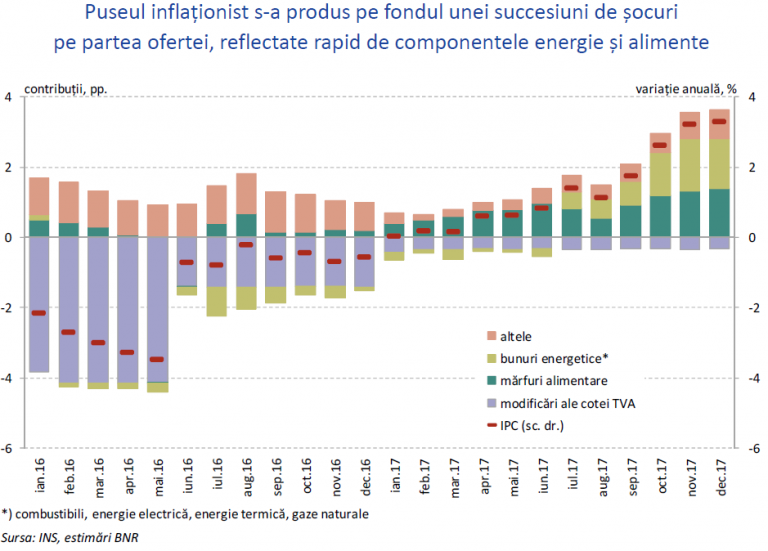 The increase in food prices received special attention from the BNR Governor, „struck” that we import products for which our country has production capacity, also a tradition.

„The acceleration of the annual inflation rate in the first three quarters of 2018 is due to those components of the consumer basket exogenous to the monetary policy’s scope of action,” says the BNR Governor, who placed this way the responsibility to the Government and its economic and fiscal policies but also to the external influences.

The sources of acceleration are represented by the „the depletion of the first-round statistical effects related to cuts in some indirect tax, respectively to the elimination of several non-fiscal charges in early 2017, as well as the transient influences of some significant increases in the administered prices and the fuel prices in the latter part of 2017,” says the BNR report.

„In addition to that, the continuation in accumulating inflationary pressures from the domestic environment coming from the fundamental factors of the base inflation„, according to the mentioned source.

The Governor concludes: „All factors have acted in the fourth quarter towards the increase in prices. You probably remember that we also had, usually, factors pushing prices down. That shows figures do not look good. They do not look good at all (…) as if the troubles have been concentrated in recent months,” Mugur Isarescu said.

The BNR Governor invoked the logic on the need to correct the fiscal policy.

„We welcomed the fact that the Government maintained the budget deficit below 3% of GDP and that led to maintaining the public debt share of GDP below 40%,” Mugur Isarescu said.

However, the 40% threshold is a maximum acceptable: „You know that a critical threshold at the level of the European Union is 60% but for the emerging countries like Romania, it is considered that 40-45% is a critical level,” recalls the BNR Governor.

„We believe, here, at the National Bank, that we are not preaching in the wilderness when we say that the fiscal policy should be logical and not pro-cyclical. You must, when you have such economic growth, not remain at the 3% limit of the public deficit, but try to place yourself lower,” the Governor repeated the warning on the pro-cyclicality.

Maintaining the deficit below the maximum allowed in the EU is not a questionable performance, because „this 3% is an extremely high level, in comparative terms and historically, for the economic growth,” says Mugur Isarescu.

„As a result, the structural deficit has risen from 2.2% to over 3%, which is significantly above the 1% mid-term objective” (set by the European Commission), according to the Governor.

Increasing foreign deficits is one of the results of the fiscal and income policies and, at the same time, the cause of the rising inflation.

„The trend in the widening trade deficit is one of the main issues that we have to worry about,” says the BNR Governor, who believes that „a monthly deficit that is frequently above one billion euros is very much”.

The Governor noted again the faster growth rate in imports (+ 12%) than exports (+ 9%), but he also focused on the fact that the trade deficit „has increased in areas where we believe that Romania has a potential, in food products”.

Mugur Isarescu paid much attention to the agri-food sector and did not resist the temptation to find that „we import a lot of apples”, we have only 3% of the EU production, although 14% of the cultivated area.

The Governor provided the analyses of the BNR analysis team, to those who are better in this area, to „specialists” in agriculture and food sector, to identify the structural problems that led to this imbalance.

Otherwise, at the end of the synthesis presented on Friday, the BNR Governor also included a comparison between the prices of some basic foods in Bucharest and some Western cities.

„The fact that we have more „invisible” export, of services, should not give us cause for complacency. We are still a country with a productive potential, and this is where the big question arises, on the reason why we are losing export shares,” said the BNR Governor.

The tensions in the labour market also have structural causes and represent one of the structural problems for Romania’s development, according to the BNR report.

„Unitary labour costs have also pushed general costs up”, consequently pushed the inflation, according to the Governor.

On the one hand, „the labour market is very tensed,” and on the other hand, „the average salary battle is ridiculous. We should not exaggerate the pressures towards growth but otherwise, if we want to bring Romanians back to Romania, we need higher salaries. We (at the BNR) are not against but want to preserve the macroeconomic balances,” said Mugur Isarescu

The Governor of the National Bank of Romania invoked, in this context, the „massive wage increases in the public sector„.

By contrast, although there is an increase in the number of employees up to the historical maximum of 4.8 million people, there are „persistent structural deficiencies:

The Governor repeated the reflections that already became usual regarding the flexibility of the exchange rate.

At the same time, he launched a new message addressed to foreign-owned banks that are willing to take advantage of the increase in the interest rate that BNR pays for their deposits.

„We have faced the carry trade phenomenon on previous occasions when some treasurers brought money from the parent bank and place them profitably at the BNR,” Mugur Isarescu said referring to the criticism regarding the BNR interest rates on deposit and credit facilities (Lombard).

The Governor recommended that the banks should first raise interest rates on customer deposits, increase them to 1.25%, „how much we give them (BNR deposit facility rate), and then give us advice.”