Beware of industry! And take it easier with redistributing an alleged increase – take a look at Germany 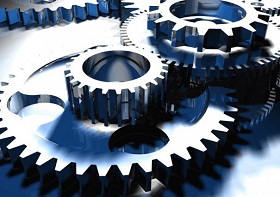 In a time when all public attention has been focused on redistributing the benefits of a robust economic growth, presumed to happen by itself, almost nobody is looking at the sector of activity which sets, in fact, the general tone: the industry. Even if it only accounts for a quarter of GDP, it determines the solid, long-term sustainable results.

Or, the result announced by the National Institute of Statistics for the first 11 months of 2016, namely 1.6% in gross series and only 0.4% in seasonally adjusted series for comparability with the same period of the previous year, are well below the economic growth presumed to reach 4.8%. And, carefully, far below the 2.4% estimated by the National Commission for Prognosis for the current year, based on which the result of 4.8% has been set as forecast made earlier this year.

That is true, money from the calculation of GDP by the international methodology does not make the difference between the gross added value from trade (perhaps it would be more intuitive if the value added tax would be called tax on the price difference, as the use value of a product remains the same regardless of the trade margins) or from the public administration, healthcare and education (where it is assumed by convention that higher wages would correspond to better services with higher added value) and the one effectively obtained in industry.

Therefore, if the figures so far confirm the plausible economic growth of 4.8% in 2016 (4.9% in 9 months) whereas the industry „has not achieved the plan” of 2.4%, it means that other GDP components have outperformed. That means there was a „push” on the trade and wage increases without a counterbalance in domestic production and with the rise of the foreign deficit.

Obviously, this consumerist extravaganza on borrowed money paid (for now) with about 5% of the money raised in the public budget, with the only aim to keep the state debt below 40%, cannot maintain at the same level, let alone grow. Since they are still searching ten billion lei in the budget, we let you know that you paid in the first eleven months of 2016 almost 9.7 billion lei as interest payments on public debt.

A public debt that should have be seen in highways, municipal infrastructure and performant public administration. Also, in equipping the hospitals and schools. Or, as much as you can see them, I also see them. Summarizing, there is no solid basis for increasing benefits and no justification for accumulating deficits to be bequeathed to future generations.

Turning, though, at the risk of being accused of pre-1989 nostalgia, to the segment of material production, it would also be useful to see how the industry results have changed by fields of activity. Although less attractive than the political conflicts, they are more suggestive and have implacable consequences for Romania’s future.

So here they are the main updated results of the domestic industry: 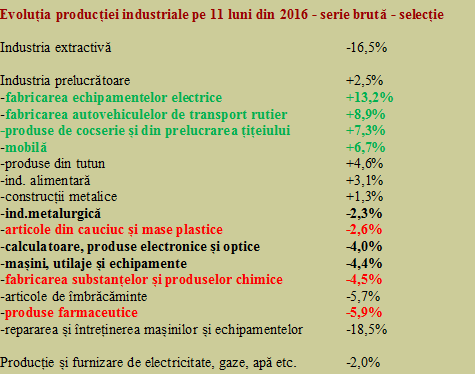 It can be seen that within the industry as a whole, there is a clear differentiation in terms of intra-sectoral developments, with performances attained for the electrical equipment production (probably included in the finished products sold by others) and motor vehicles manufacturing and worrying situation in areas where we could obtain high added value (computers, electronic and optical products, also machinery and equipment).

Utterly alarming is the continued decline of the chemical products in various forms, from the common plastics to medications that we now have to import instead of producing them locally, at least for national security reasons. The chemicals concentrate 70% of Romania’s foreign deficit and the decline indicates the perspective of deepening this real hole in our national industry.

Altogether, the overall industry performance in 2016 left much room for improvement, away from public attention. That could create the illusion that money doping for consumption from predominantly foreign sources of production might work. Doping that is increasingly visible as we are in the European ranking of the retail sales increase in November (+ 1.4% and + 9.5% compared to the same month of 2015) and the current account deficit has tripled over the past two years.

Perhaps it would not be wrong to keep in mind that the European industry benchmark, Germany, although it registered a current account surplus of more than seven percent, based on expanding exports, it ranked the last in November 2016 in terms of monthly increase of the retail trade has positioned, with -1.8%. Meaning that it has not jumped to exhaust was rushed to consume this result, but on contrary, it reduced its public debt by three percent and a half since 2014.

Probably in order to not pay any longer year by year (as in the ad for Aspenter) interest (like those over 10 billion lei for this year, as it would be our case) for the loans from the past, which would place a burden on the future indefinitely.