The general consolidated budget registered in the first half of the current year a deficit of about RON 45 billion, equivalent to 4.2% of the… END_OF_DOCUMENT_TOKEN_TO_BE_REPLACED

At the European level, there is an agreement to introduce a “modest” tax on disposable plastic, a first source of income to support the repayment… END_OF_DOCUMENT_TOKEN_TO_BE_REPLACED

Long-term interest rate for Romania fell by almost one percentage point in just two months, according to data released by Eurostat. After increasing up to… END_OF_DOCUMENT_TOKEN_TO_BE_REPLACED

Budgetary and institutions’ operational constraints generated by the pandemic have subjected the Romanian tax system to significant tensions, which proved its limits, notes the international… END_OF_DOCUMENT_TOKEN_TO_BE_REPLACED

An essential indicator in (great) pain: Observations and solutions to proportion of workers with a temporary employment relationship 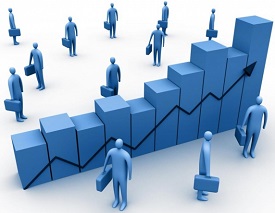 Romania marks one more indicator where it ranks the last in the European Union, namely the share of workers with a temporary employment relationship.

The level of 1.4% announced by Eurostat for 2016 is ten times lower than the EU average, of 14.2%, and nearly twenty times below the size of the country that is closest to us in terms of size and level of economic development, Poland (27.5%). 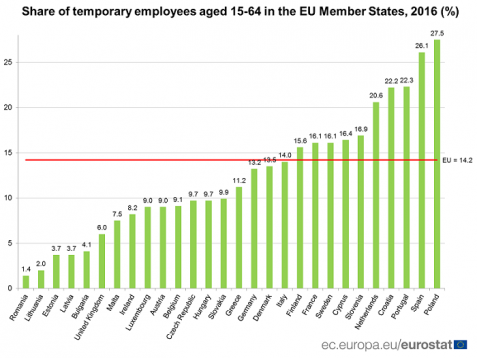 The problem is not that we are below the BELL group consisting of the Baltic countries and Bulgaria (a neighbour and a colleague in the same EU wave of enlargement, where the percentage of temporary employees is triple), but the fact that we are right on the opposite side to Poland. This is, in many ways, our development pattern and the reference for the way of narrowing the gaps between us and the West.

In fact, the Poles have intensively used this method of increasing the employment to solve the problem of an unemployment well above the European average and to streamline a labour market facing the challenges of relatively rapid changes in the occupations and the relation between the supply and demand.

By contrast, the rather pronounced rigidity of the labour market in our country is a factor that discourages employers’ abuses, but diminishes the development dynamics of businesses, particularly in the micro-enterprises and SMEs segment.

Figures clearly indicate that we are outside the European practices in the field and offers an important point to be solved in the matter of real convergence.

The fact that the main driver, Germany, is only one percentage point below the EU average at this indicator (13.2%) and the other Romania’s major European partners are very close to this average, with the Latin sister Italy at 14% and France at 16.1%, should be a cause for reflection for us.

Especially that former colleagues from the socialist bloc have adjusted their practice in the field and got just a stone’s throw from the 10% threshold (Hungary and the Czech Republic).

The newly arrived Croatia reached 22.2% and all these countries, along with Poland, coincidence or not, have a similar free-floating national currency, different from the rigidity of the eurozone system (which the Baltic countries have joined, while Bulgarians already mention the amounts in euro on most receipts issued in stores).

Bringing the indicator of temporary employment to a level close to the EU countries that are in the same category but somewhat more advanced on the path of real convergence would also solve the issue of reaching the employment of 70% at national level, foreseen in the Europe 2020 strategy.

We are currently on a growth trend, at 66.3%, according to INS data for 2016, but we are unlikely to reach our target unless we do something in the matter of temporary employment.

Last year, 212,000 people were registered with part-time work relationships who were willing to work for more hours, being considered under-employed. They accounted for 2.4% of the active population, 2.5% of the employed population and 29.3% of the total number of people working part-time.

Of the inactive population, another 345,000 people were available to start working but did not seek employment. Significant for the gap to the 2020 target, they accounted for 3.8% of the active population. Developing programs for temporary employment would mobilize this potential workforce that remains unused.

Last, but not least, we notice our presence in the minority of countries where the share of women with temporary employment is much lower than that of men. In 18 EU countries (including all Western countries, except for Portugal and Germany, where gender equality is also seen in the area of work), the share of men working on a fixed-term basis is below that of women.

In our country, the percentage is the most unbalanced towards the male workforce (+ 70%), with only 1% of women in temporary employment. This suggests that the offer should be directed to the female segment if we are willing to get close to the European practice.

Only in Latvia we can see such a discrepancy (64%) but at a rate of 2.8% representing the proportion of women in temporary employment. That is, while Lithuania and Bulgaria have dropped below 30% and Estonia is moving towards 10%. That is the level where Poland or Slovakia also stand. While in the Czech Republic (11.6% compared to 8.1%), Hungary (10.2% compared to 9.4%) or Croatia (22.4% compared to 21.9%), the “score” is higher for the female workforce.

Luca de Meo (foto), the new general manager (CEO) of Renault group, considers that Dacia project proved to be a miracle and that no one… END_OF_DOCUMENT_TOKEN_TO_BE_REPLACED

A former Soviet airbase in central Romania could become a hub for US Air Force operations in south-eastern Europe, where the Pentagon is seeking to… END_OF_DOCUMENT_TOKEN_TO_BE_REPLACED

Nuclearelectrica's Board of Directors has been mandated to initiate proceedings to terminate negotiations with China General Nuclear Power Group (CGN), as well as legal effects… END_OF_DOCUMENT_TOKEN_TO_BE_REPLACED

Romania imported an amount of electricity of almost 796 GWh in the first month of this year, by more than 36% above what it exported… END_OF_DOCUMENT_TOKEN_TO_BE_REPLACED

GFG Alliance has committed to invest one billion euros to upgrade Galati steel plant in order to reduce emissions and increase production. Another EUR 1… END_OF_DOCUMENT_TOKEN_TO_BE_REPLACED

The Transport Ministry, as the Intermediate Body in Transport, approved the financing request for the project "Construction of Sibiu - Pitesti highway", Sections 1, 4… END_OF_DOCUMENT_TOKEN_TO_BE_REPLACED

Lack of trust in authorities, corruption and low living standards are the main reasons why young people leave Romania. The data is part of a… END_OF_DOCUMENT_TOKEN_TO_BE_REPLACED

Romania is the EU country with the fewest cars in terms of the number of inhabitants, according to data recently published by Eurostat. We appear… END_OF_DOCUMENT_TOKEN_TO_BE_REPLACED

The Government is preparing the public for the first measures aimed at avoiding the budget slippage, which would be applied by the PSD-ALDE government. News… END_OF_DOCUMENT_TOKEN_TO_BE_REPLACED

French Prosecutor Jean-Francois Bohnert will be appointed as head of the European Financial Prosecutor's Office, a position for which he was heard on Thursday, 11… END_OF_DOCUMENT_TOKEN_TO_BE_REPLACED

Romania recorded the highest road deaths in the EU also last year, with 96 deaths per one million inhabitants in 2018, almost double the EU… END_OF_DOCUMENT_TOKEN_TO_BE_REPLACED

Sorina Pintea announced on Thursday further new changes that will be brought to the functioning of the health care system, including new rules for employment… END_OF_DOCUMENT_TOKEN_TO_BE_REPLACED

The new order on approval and selection procedures for insolvency practitioners is an important step to a very good direction, industry experts say. ANAF is… END_OF_DOCUMENT_TOKEN_TO_BE_REPLACED