Already a (big) problem: The real negative interest rate. An evolution in deposits and loans 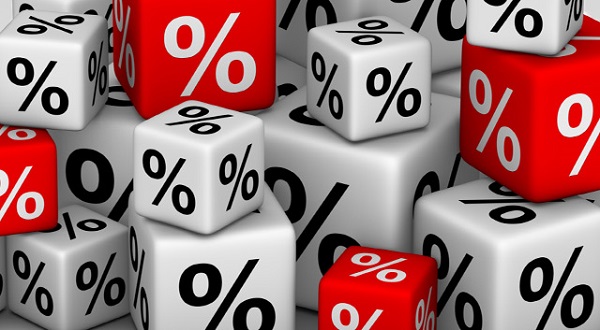 After entering the negative range at the mid of 2017, the remuneration of deposits at commercial banks reached a worrying -2.23% per year, according to the data published in monthly BNR bulletin 11 / 2016. It is an evolution contrary to the maximum level of the last four years reached in 2016 when the real interest rate (calculated by adjusting the nominal one with inflation) reached + 2,70%.

The reduction, in just one year, by five percent of the benefits of those who choose to save and, implicitly, secure from domestic sources the financing to borrowers, for personal loans or for their firms, is a much wider problem than the one of the famous ROBOR.

Normally, the ratio between those who deposit money in banks and borrowers is higher than 10 to 1. While the latter are more vocal and complain about any increase in installments, the silent majority who is currently losing from the purchasing power of their deposited amounts does not seem to notice.

Ever since the middle of this year, the purchasing power of the money deposited in banks in term deposits started to decline more and more until it reached a higher value than the much more famous ROBOR. Basically, in an attempt to maintain the gain close to four percent, commercial banks have transferred the sharing of the profit obtained from their financial intermediation from depositors to borrowers.

That is, as a result of the accelerating evolution of the consumer price index, the situation of those who complain about the higher interest rates on loans is exactly the opposite than presented in the media. 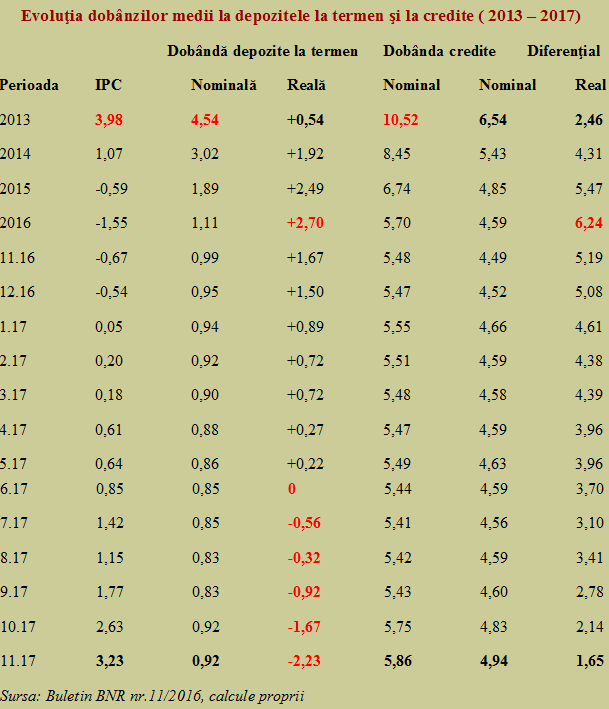 If you have the curiosity to compare real interest rates on deposits with the real difference between the benefit from placing money in loans and paying interests for that money (simply shown in the table as „Difference” you will immediately notice a share of about 45% to depositors and 55% amount remained in the bank in 2014, 2015 and 2016, regardless of the nominal values.

The adaptation of banks to the return of the inflation to the positive range (which occurred in the first month of this year) took place through the gradual reduction of the benefits offered to depositors. When they saw in February-March 2017 that they were heading toward a gain that was considered to be too small, three and a half percent (although higher than in 2013 and 2014), their decision was to maintain as low as possible the interest rates both on loans and deposit accounts.

But if we look at the fact that we are already at a triple inflation rate compared to 2014 and we are heading in the first quarter of this year to the level of 2013, one may ask why the settlement of interest rates would not again be similar, with values double on loans and four times higher on deposits.

Of course, for businesses and house purchases the current situation is good, but these actions are done with the money of other people who have something to lose in terms purchasing power. In the stock of all life-saving money and not just the current income (a note to increase seeker retirees who have put money aside).

The essential difference between nominal and real values is not so difficult to explain and understand. The public interest should be huge, given the number of people affected. Unfortunately, it seems more profitable to exploit the lack of attention/ignorance of many than to provide them financial education, act ethically and fairly.

What do you say, how it would be more fairly, to allocate 0.54% in real terms of the 2.46% gain when you need money, or to discreetly penalize by -2.23% and invoke at the end of the day a gain of only 1.65%, based on the idea that it is possible to obtain more from the depositors than from the borrowers, when money is a cheap commodity by various measures? By the way, just why has the policy interest rate increased?