According to data provided by INS, in November 2019 Romania recorded a new alarming decrease in monthly industrial production at the level of the negative… END_OF_DOCUMENT_TOKEN_TO_BE_REPLACED

Almost 600,000 Romanian children and young people aged between 0 and 19 years, that is 12.6% of the total Romanian people in this age group,… END_OF_DOCUMENT_TOKEN_TO_BE_REPLACED

On Thursday, the appointed Prime Minister, Ludovic Orban, presented to colleagues from the National Office the document that he will submit to the Parliament, which… END_OF_DOCUMENT_TOKEN_TO_BE_REPLACED

The long-term interest rate fell below zero in the Eurozone and dropped to only 0.28% on average at the EU level, half as compared to… END_OF_DOCUMENT_TOKEN_TO_BE_REPLACED

Net costs for the state with holiday vouchers for public sector employees and the VAT cut for tourism will amount to RON 1,878 million in… END_OF_DOCUMENT_TOKEN_TO_BE_REPLACED

After 27 years of domestic and foreign investments: State institutions remain top employers in more than half of counties 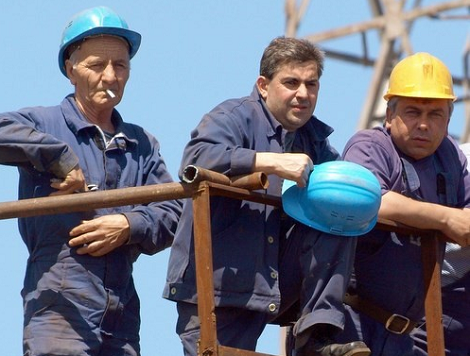 In more than half of Romania’s counties, the state has at least one representative among the top two employers at the county level. Usually, it is the county hospital or, in poor counties, the social assistance directorates.

There is also a third employer category that depends on the state: those who have been supported at least once with funds from the public budget or still receive state subsidies.

The most bizarre situation is in Suceava county, where the Archdiocese of Suceava and Radauti ranks first, with more than 1,800 employees, personnel and non-clerical, according to the statements made by the institution for cursdeguvernare.ro.

We should mention that the state pays the heads of the religious cult, positions assimilated to dignitary functions, as well as the leading positions, as well as part of the priests’ salaries (65% or 80% in case of low-revenue cult units).

Second in this ranking, in Suceava, is Sf Ioan Cel Nou County Hospital, with 1,353 employees, according to the latest data.

Hospitals should be funded exclusively by the reimbursement of medical services, which is made from the Single National Health Insurance Fund (FNUASS), where the taxpayers’ health contributions are paid.

The tariffs cannot cover, though, all salaries of the medical and non-medical staff, so some of the money is subsidies.

In hospitals that are also university centres, the number of employees is huge, as it also includes many resident doctors. In Iasi, for example, there are approximately 1,000 resident doctors (including pharmacists and dentists).

There are also 75 workers (skilled and unskilled) in charge of the maintenance, about 275 corpsmen, carers, and laundresses.

Therefore, they inevitably appear in top 5 counties, where there are no companies with more than 1,500 employees.

In Vaslui, for example, with only a few employees below Rulmenti company and ranking 3rd, it is the County Hospital and the ranking structure can be reversed anytime if the economy faces problems.

County social assistance directorates are among the largest employers, present in top five of poor counties. The explanation is natural because in such counties there are more abandoned children, with or without disabilities, elderly people with problems.

The most flagrant situation is in Vaslui, where the General Directorate for Social Assistance and Child Protection (DGASPC) had 2,540 employees in September.

In Botosani county, Formens company ranks second with 1,015 employees but could be overtaken at any time by the local DGASPC, which has more than 1,200 jobs in the organisational structure, of which 1,004 were filled.

In Caras-Severin, where two renowned companies – Combinatul Siderurgic and UCMR – had together about 25,000 employees before 1989, DGASPC ranks fourth in top employers, with the Social Assistance Directorate having 1,033 jobs.

In Vrancea, DGASPC has 1,239 jobs in the organisational structure, slightly below those paid by the largest employer in the county – Artifex.

The Transport Ministry, as the Intermediate Body in Transport, approved the financing request for the project "Construction of Sibiu - Pitesti highway", Sections 1, 4… END_OF_DOCUMENT_TOKEN_TO_BE_REPLACED

Lack of trust in authorities, corruption and low living standards are the main reasons why young people leave Romania. The data is part of a… END_OF_DOCUMENT_TOKEN_TO_BE_REPLACED

Romania is the EU country with the fewest cars in terms of the number of inhabitants, according to data recently published by Eurostat. We appear… END_OF_DOCUMENT_TOKEN_TO_BE_REPLACED

The Government is preparing the public for the first measures aimed at avoiding the budget slippage, which would be applied by the PSD-ALDE government. News… END_OF_DOCUMENT_TOKEN_TO_BE_REPLACED

French Prosecutor Jean-Francois Bohnert will be appointed as head of the European Financial Prosecutor's Office, a position for which he was heard on Thursday, 11… END_OF_DOCUMENT_TOKEN_TO_BE_REPLACED

Romania recorded the highest road deaths in the EU also last year, with 96 deaths per one million inhabitants in 2018, almost double the EU… END_OF_DOCUMENT_TOKEN_TO_BE_REPLACED

Sorina Pintea announced on Thursday further new changes that will be brought to the functioning of the health care system, including new rules for employment… END_OF_DOCUMENT_TOKEN_TO_BE_REPLACED

The new order on approval and selection procedures for insolvency practitioners is an important step to a very good direction, industry experts say. ANAF is… END_OF_DOCUMENT_TOKEN_TO_BE_REPLACED

Romania lost to Estonia in the final vote to get the non-permanent member position within the UN Security Council for the period 2020-2021. On Friday,… END_OF_DOCUMENT_TOKEN_TO_BE_REPLACED

eMAG hopes to get the opinion of the Hungarian Competition Council over the next two months for the acquisition of Extreme Digital, the market leader… END_OF_DOCUMENT_TOKEN_TO_BE_REPLACED