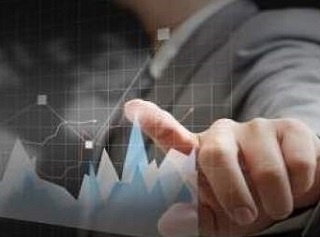 The current account of the balance of payments recorded a deficit of EUR 6.464 billion last year, 85% higher than in 2016.

The minus registered in the goods segment has widened by almost 30% and has reached over EUR 12 billion, while the positive contribution of the service segment has increased by only three percent to around eight billion euros.

The deficit from the product exchange with foreign partners increased to 6.5% of the estimated GDP for the current year and only two-thirds of it was covered by the money obtained from service category, where transports contributed the higher share (45%) of the total positive balance (EUR 3.64 billion).

Services for processing third-party goods have advanced significantly (+ 12%) to a result of about EUR 2.7 billion, which came close to covering about a quarter of the goods trade deficit. Similarly, in the „other services” category, there was an increase of 22%, up to two and a half billion euros.

Unfortunately, against the background of substantial increases but quite lower in receipts than payments (+ 43% on credit versus + 61% on debts, last year compared to the situation in 2016), the chronically negative balance in tourism increased almost twice and a half compared to the previous year, from EUR -362 million to EUR -874 million.

On the other two major components of the balance of payments, developments were also negative. The primary income deficit (from work, direct investment, portfolio and other investment, and other primary income such as taxes or subsidies) increased by almost 13% compared to the same period of the previous year and exceeded the threshold of EUR 5 billion.

In the secondary income area, where we find the amounts transferred by those working abroad, the positive balance increased by five percent. However, the advance resulted from the mix between the decrease of more than 10% in the amounts sent to the country (from about EUR 5 billion to 4.5 billion) and the 27% decrease in the amounts sent from Romania to other countries (from EUR2.5 billion to 1.9 billion). 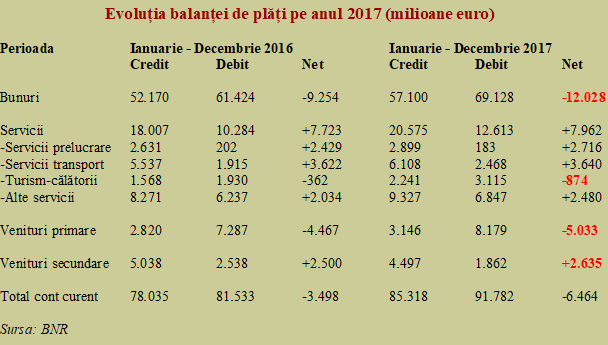 Notably, secondary incomes, which include the money sent home by strawberry pickers, while they ranked second most important in 2016, after the transport, now rank only third in net terms, below „Services of processing third-party goods” (EUR 2.635 million compared to EUR 2.716 million).

A worrying trend for the national currency, the balance of non-residents’ long-term deposits decreased by 28% in 2017 (from EUR 3.64 billion to EUR 2.61 billion). Moreover, about EUR 400 million has been withdrawn only in the last month of last year. The external debt service related to these deposits amounted to EUR 2.32 billion (1.24% of the official GDP estimate).

Non-residents’ direct investment stagnated last year (EUR 4.586 million compared to EUR 4.517 million). Out of them, equity investments (including the net estimated reinvested profit) amounted to EUR 3,822 million and intra-group loans to EUR 764 million (one-sixth of the total amount accounted for).

Total external debt advanced by slightly more than one percent in 2017 compared to the level at the end of 2016 and reached EUR 93.954 million. Payments on external debt amounted to EUR 68.5 billion.

Goods and services import coverage ratio dropped below the theoretically recommended limit of 6 months (5.4 months), moved away from the level of 6.3 months recorded at the end of the previous year and reached well below the comfortable levels of 2013 (7.3 months) or 2014 (6.9 months).

Mid and long-term foreign debt decreased by 1.3%, but short-term foreign payables increased by more than 8% in 2017 and reached a threshold of EUR 25 billion. From these contrary developments, it resulted in an increase of the total debt by slightly more than one percent, to EUR 93.954 million.

In fact, for about the same total debt as in 2014 (the year we went out of the crisis), about seven billion euros shifted from long to short-term (relatively fast advance of 35% in the outstanding amounts at a GDP increase of about 25%), which somewhat reduced the financial stability of the economy.

Noteworthy, the short-term external debt coverage degree, calculated at the residual value, with the BNR’s foreign reserve assets (recommended to be over 100%) declined significantly to 86.4% (it was still recovering at the end of the year, after a minimum of 84.1% reached in November), significantly below 90.5%, recorded at the end of 2016.