The general consolidated budget registered in the first half of the current year a deficit of about RON 45 billion, equivalent to 4.2% of the… END_OF_DOCUMENT_TOKEN_TO_BE_REPLACED

At the European level, there is an agreement to introduce a “modest” tax on disposable plastic, a first source of income to support the repayment… END_OF_DOCUMENT_TOKEN_TO_BE_REPLACED

Long-term interest rate for Romania fell by almost one percentage point in just two months, according to data released by Eurostat. After increasing up to… END_OF_DOCUMENT_TOKEN_TO_BE_REPLACED

Budgetary and institutions’ operational constraints generated by the pandemic have subjected the Romanian tax system to significant tensions, which proved its limits, notes the international… END_OF_DOCUMENT_TOKEN_TO_BE_REPLACED

Well, yes: Law on lobby, OUG draft: We easy find out who lobbyists are, but not what they do. Six sectors where you are not allowed to lobby 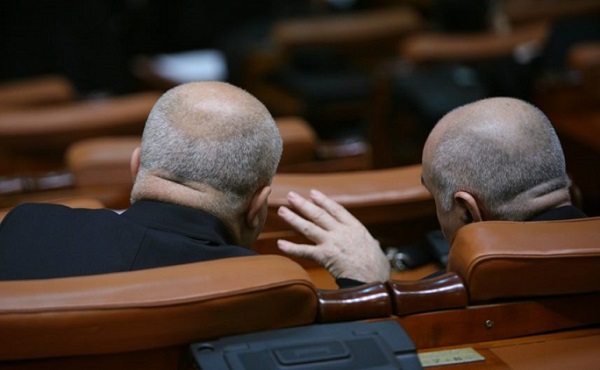 On Monday, Ministry for Business Environment launched the draft Emergency Ordinance on transparency in the area of lobbying and representation of interests.

The wish to legislate and regulate lobbying is old: since 2000, five similar drafts have been classified or rejected, while other two are theoretically in the legislative proceedings within the parliamentary committees, even though they were initiated in 2010, respectively 2011.

A first step towards regulating lobbying was made in 2016 when the Government approved the establishment of the Unique Interests Groups Transparency Register, a register where top decision makers from the government structure where required to announce their meetings with various business groups.

Sectors where lobbying is forbiden

According to the new proposal, the following are explicitly exempted from the ordinance:

The draft forbids a public representative to lobby during his/her mandate in his/her field of activity.

Lobby Register, in the care of Trade Registry Office

By ordinance, the Lobby and Interest Representation Register is established, a register to be administered by the Trade Register Office attached to Bucharest Municipal Court.

This register will contain three sections:

The information from these three sections will be made available to the public free of charge in digital format.

Transparency, but up to a point

Contracting parties under a lobby agreement or lobbyists’ meetings with public representatives will also be notified to the registry and the information is stored in a special section of the register.

Accessing this final set of data by individuals or legal persons can only be made by paying a fee and only if a priority legal interest, as defined by Article 8 (2) of the European Convention on Human Rights, is justified.

The article to which the draft refers is: “It is not allowed the interference of a public authority in the exercise of this right (the right to private and family life – editor’s note) unless it is provided for by law and represents, in a democratic society, a necessary measure for the national security, public safety, country’s economic welfare, defence of order and prevention of criminal deeds, protection of health, morals, rights and freedoms of others.”

The draft lists the obligations of a lobbyist or a lobby company and establishes fines for non-compliance. The minimum fine is RON 50,000 and the highest RON 300,000.

Identifying and sanctioning contraventions will be carried out by the specialized personnel of the Public Finance Ministry. These penalties must be notified for registration in the Registry and the Trade Registry Office.

The Justice Minister has the prerogative to order the removal from the Registry of a lobby company that seriously and consistently violates the obligations of conduct.

A first step towards regulating lobby in Romania was made in 2016 when the Government decided to establish a so-called Unique Interests Groups Transparency Register (RUTI).

The draft adopted at the time was much richer in technical details and was also forcing the top government decision-makers to publish their meeting agenda in the register. RUTI was administered by the Ministry of Public Consultation and Social Dialogue, ministry dissolved by Prime Minister Viorica Dancila.

Law is being drafted, association already exists since 2010

Even though the specific legislation is now in the preparatory phase, the Romanian Lobbying Register Association (ARRL) has been operating for a while in Romania and it states that the activity has both legal and judicial recognition.

According to the association:

“ARRL was established in June 2010 contribute to the awareness and promotion of the     lobby activity, considered a multidisciplinary activity that involves legal, economic, sociological and communication knowledge. ARRL functions as a Romanian legal person with a non-profit, non-governmental, autonomous and apolitical character,” writes the website of the association that encourages the registration in a Transparency Register of Lobby and Advocacy Activities, “a replica of the Transparency Registry of the European Parliament and the European Commission”.

Luca de Meo (foto), the new general manager (CEO) of Renault group, considers that Dacia project proved to be a miracle and that no one… END_OF_DOCUMENT_TOKEN_TO_BE_REPLACED

A former Soviet airbase in central Romania could become a hub for US Air Force operations in south-eastern Europe, where the Pentagon is seeking to… END_OF_DOCUMENT_TOKEN_TO_BE_REPLACED

Nuclearelectrica's Board of Directors has been mandated to initiate proceedings to terminate negotiations with China General Nuclear Power Group (CGN), as well as legal effects… END_OF_DOCUMENT_TOKEN_TO_BE_REPLACED

Romania imported an amount of electricity of almost 796 GWh in the first month of this year, by more than 36% above what it exported… END_OF_DOCUMENT_TOKEN_TO_BE_REPLACED

GFG Alliance has committed to invest one billion euros to upgrade Galati steel plant in order to reduce emissions and increase production. Another EUR 1… END_OF_DOCUMENT_TOKEN_TO_BE_REPLACED

The Transport Ministry, as the Intermediate Body in Transport, approved the financing request for the project "Construction of Sibiu - Pitesti highway", Sections 1, 4… END_OF_DOCUMENT_TOKEN_TO_BE_REPLACED

Lack of trust in authorities, corruption and low living standards are the main reasons why young people leave Romania. The data is part of a… END_OF_DOCUMENT_TOKEN_TO_BE_REPLACED

Romania is the EU country with the fewest cars in terms of the number of inhabitants, according to data recently published by Eurostat. We appear… END_OF_DOCUMENT_TOKEN_TO_BE_REPLACED

The Government is preparing the public for the first measures aimed at avoiding the budget slippage, which would be applied by the PSD-ALDE government. News… END_OF_DOCUMENT_TOKEN_TO_BE_REPLACED

French Prosecutor Jean-Francois Bohnert will be appointed as head of the European Financial Prosecutor's Office, a position for which he was heard on Thursday, 11… END_OF_DOCUMENT_TOKEN_TO_BE_REPLACED

Romania recorded the highest road deaths in the EU also last year, with 96 deaths per one million inhabitants in 2018, almost double the EU… END_OF_DOCUMENT_TOKEN_TO_BE_REPLACED

Sorina Pintea announced on Thursday further new changes that will be brought to the functioning of the health care system, including new rules for employment… END_OF_DOCUMENT_TOKEN_TO_BE_REPLACED

The new order on approval and selection procedures for insolvency practitioners is an important step to a very good direction, industry experts say. ANAF is… END_OF_DOCUMENT_TOKEN_TO_BE_REPLACED