The most inefficient post-revolutionary parliament: IPP analysis of the 2012-2016 legislature 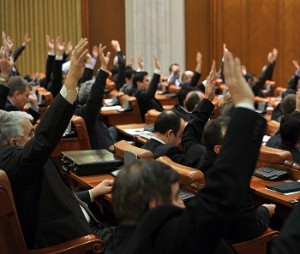 One week before the parliamentary elections of 2016, when voters are called back to the polls, the Institute for Public Policy (IPP) shows by figures and summaries why it is important for us to elect future incorruptible deputies and senators, able to exercise the primary role of a Parliament member, consisting of initiation and support of bills.

The Institute for Public Policy (IPP) published Monday a brief review of the main issues that have marked the activity during the legislative period 2012-2016.

At the time of the IPP monitoring, there were a total of 2,729 bills submitted in the current legislature, of which 1,689 (68%) being initiated by MPs and 870 (32%) – by the Government. 50% of the MPs’ bills – have been rejected (more than a third being under further parliamentary procedure) and only 14% became laws.

In the same period, more than 80% of the Government’s initiatives were adopted.

Most bills submitted in the current parliamentary mandate were initiated by:

IPP figures indicate that the current legislature is the most inefficient of the post-revolutionary parliaments, both in terms of the legislative activity in itself and the many integrity / criminal matters of some of the elected members.

The current Parliament has reached the end of the term with 507 MPs compared to 588 members who were elected in the 2012 elections. 15% of the uninominal elected members in 2012 are no longer found in the Parliament for various reasons, mostly because of their problems with the law, as they were convicted with definitive judgments / under prosecution.

Large number of incomplete mandates in the current legislature: 89 MPs (64 deputies and 25 senators) who have not completed their current mandate:

PSD and PNL lost in this mandate an equal number of MPs (74) who changed the party group / resigned / terminated the mandate with the power of law.

The longest-serving MPs – 7 parliamentary terms so far in the Chamber and the Senate:

MPs’ migration reached record levels during this term. At the time of completion of this analysis, 223 MPs, i.e. 38% of the total number, are no longer affiliated to the parliamentary group / party along which they were elected in 2012.

37% of the elected members of the Senate and 39% of the Chamber of Deputies members migrated after the 2012 elections and 68 elected MPs on the PPDD lists migrated to other parties.

Moreover, the PPDD group and PDL group (via merger with PNL) were abolished during the term.

The party with the largest number of candidates in these elections who have not been members of the Parliament before – PNL (a significant proportion of them not being on eligible positions), while the party with lowest rate of change in 2016 is ALDE.

Transparency of revenues – requirement for an honest mandate

In terms of financial assets (calculated as net difference between the account balance at the moment of starting the mandate and the last asset declarations updated in euro, at an official average annual exchange rate published by BNR), the latest official asset declarations published by senators and deputies indicate losses totalling nearly EUR35 million. According to the official documents available on the websites of both chambers of the Parliament, deputy Sebastian Ghita lost over EUR 30 million from his accounts during this mandate.

Those who have collected the most financial assets, for various reasons, during the current mandate are:

From the Chamber of Deputies:

It is interesting the „phenomenon” of loans that member of the Parliament granted in their own names to individuals / companies.

According to their statements of assets, in four years, they granted loans totalling EUR47 million, the largest loans being granted:

At the Chamber of Deputies, by:

At the Senate of Romania, by:

By comparison, the balance of loans that lawmakers still have to pay to the banks, at the end of the parliamentary term, is 22 times smaller: approx. 880,000 euro.

In terms of real property – land, the current Parliament accumulated, in addition compared to 2012, approx. 2.5 million square meters of land (agricultural land mostly), the largest land purchases being made during this mandate by deputies:

The main conclusions of IPP

The issue of MPs’ „migration” from one parliamentary group, through short periods of „independence” to another remains an unresolved issue of the current political class. For the local officials, they were quick to come up with legislative solutions, for themselves – not.

In the same time, to those who are constantly following the activity of the elected politicians, the way the Parliament keeps a record of this information (a serious delay between the time of the public announcement of resignation from the parliamentary group and the official notice) is deficient, to correct understanding the phenomenon of the public.

48% of the current MPs run again; among the criteria that seem to be applied by the leaders of parties – who have the final decision on the list of candidates for the parliamentary elections in 2016 – apparently, the opinions of the pressure groups / groups of interest from the society weigh more than the individual performance during the current mandate.

That seems to be the explanation for the absence from the lists of some candidates on whom the objective statistical data show concrete results in the parliamentary work, some of these results being beyond dispute and some of them suggesting that they bothered certain interests.

For a country like Romania, integrity, including the source and overall the statement of elected people’s revenues, is very important, sometimes more important for the public opinion than the activity itself.

By the number of initiatives become laws, conclusion indicates a poor quality of those laws initiated by parliamentarians, this situation being influenced, among others, by the insufficient prior preparation of these initiatives (when the topic is relevant) including because of the level of experience of the parliamentary groups’ staff / the staff of the local parliamentary offices, which is still very poor.

In this mandate, any normal citizen who would have wanted to check how their Senator or Deputy voted would have had difficulties in accessing the information about the parliamentarians’ nominal votes on the bills, given that the Parliament’s electronic voting system has been replaced and inexplicably blocked exactly at the most sensitive times of the voting process. For example, they used the electronic vote in the Chamber of Deputies in 2016 only in February.

It is in defiance of the parliamentary democracy that, although 15% of the MPs have ended their mandate before the term, there have not been any elections organized in most of the vacant uninominal electoral colleges which means that some people remained unrepresented in the Senate or the Chamber.

The IPP initiative is part of the efforts to raise awareness on the importance of a responsible vote in the elections on December 11 and meets the electorate’s need to be informed.