The yield of long-term Romanian government bonds was 4.28% in January 2020, according to Eurostat data. That is well above all the other states of… END_OF_DOCUMENT_TOKEN_TO_BE_REPLACED

Net subscriptions in Romanian mutual funds (the difference between invested and withdrawn amounts) became again positive in 2019 after they had been negative in 2018.… END_OF_DOCUMENT_TOKEN_TO_BE_REPLACED

Romgaz (SNG) announced the start of production in the deep area of Caragele deposit (Buzau), the biggest discovered in the last 30 years and one… END_OF_DOCUMENT_TOKEN_TO_BE_REPLACED

Romania managed again to stand out at the EU level by recording the highest level of the public deficit in the third quarter of 2019,… END_OF_DOCUMENT_TOKEN_TO_BE_REPLACED

Study: Consumption ghosts – Two-thirds of undercapitalised companies have no revenue 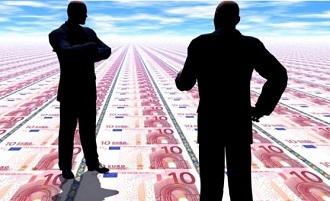 Romania’s economy is becoming more and more vulnerable due to the increasing number of businesses that state no revenues, register losses and debts exceeding their paying capacity and propagate a toxic behaviour, tolerated by regulations and a lenient supervision.

Moreover, according to a study by economist Iancu Guda, most of the toxic companies are registered in sectors related to the consumption, which means their existence has been encouraged by the Government’s policy of an unsustainable stimulation as a result of the fiscal loosening and wage increases.

Companies that do not have any activity (zero revenue) accounted for 28% of all companies registered in Romania at the end of 2017, compared to 19% in 2009, indicates the study.

Over-indebted companies (negative own equity) accounted for 45% of all companies registered in Romania at the end of 2017, compared to 37% in 2008, also tells the study quoted.

The phenomenon also came to the attention of the National Bank of Romania (BNR), which notes that “undercapitalised companies (over 60,000) account for 30% of the debt registered in the sector of non-financial companies, but for 62% of the non-financial arrears in the economy.”

In addition, these statistics “do not fully reflect the picture” of the economy because they are based on companies that submit their financial statements for half a year and “are considered to be more efficient”, according to BNR Report on financial stability.

In the consumption-related sectors, two-thirds of more than 60,000 undercapitalised and loss-making companies are still active, respectively: 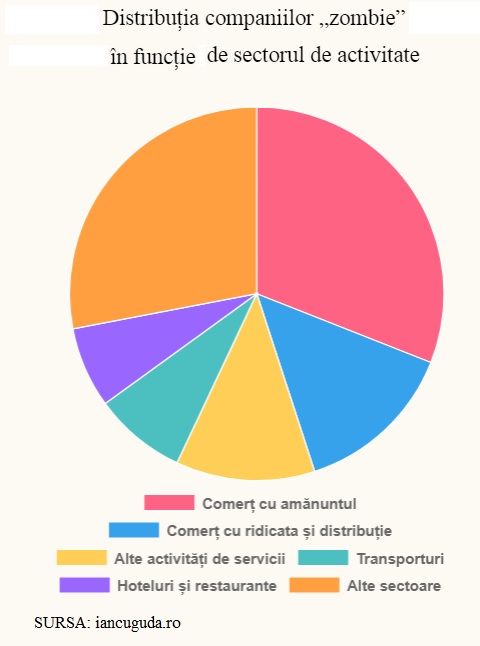 These are companies that:

The proportion of “zombie companies”, as Iancu Guda calls them, has almost doubled over the past five years, to 24.7% at the end of last year, and “is 4-6 times the average in developed countries” shows the study mentioned. 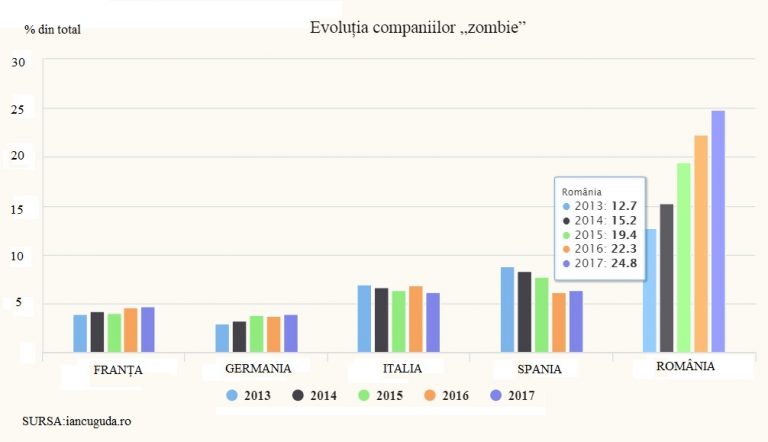 In this case, companies that at least succeeded to submit their financial statements for three consecutive years have been taken into account.

The vulnerability of the business environment due to the high proportion of “ghost” companies increases to the extent of “the negative effects these companies propagate on several channels,” namely:

The BNR says that “over the past three years, loss-making firms accounted for more than a third of active companies and losses amounted to RON 33 billion in 2016″.

Penalizing these companies and possibly removing them from the register after a certain more restrictive period, a harsher legislation and a more efficient distribution of the non-reimbursable funds, possibly by strategically allocating them to active and efficient companies are just some of the solutions for the phenomenon of companies that are toxic for the economy.

GFG Alliance has committed to invest one billion euros to upgrade Galati steel plant in order to reduce emissions and increase production. Another EUR 1… END_OF_DOCUMENT_TOKEN_TO_BE_REPLACED

The Transport Ministry, as the Intermediate Body in Transport, approved the financing request for the project "Construction of Sibiu - Pitesti highway", Sections 1, 4… END_OF_DOCUMENT_TOKEN_TO_BE_REPLACED

Lack of trust in authorities, corruption and low living standards are the main reasons why young people leave Romania. The data is part of a… END_OF_DOCUMENT_TOKEN_TO_BE_REPLACED

Romania is the EU country with the fewest cars in terms of the number of inhabitants, according to data recently published by Eurostat. We appear… END_OF_DOCUMENT_TOKEN_TO_BE_REPLACED

The Government is preparing the public for the first measures aimed at avoiding the budget slippage, which would be applied by the PSD-ALDE government. News… END_OF_DOCUMENT_TOKEN_TO_BE_REPLACED

French Prosecutor Jean-Francois Bohnert will be appointed as head of the European Financial Prosecutor's Office, a position for which he was heard on Thursday, 11… END_OF_DOCUMENT_TOKEN_TO_BE_REPLACED

Romania recorded the highest road deaths in the EU also last year, with 96 deaths per one million inhabitants in 2018, almost double the EU… END_OF_DOCUMENT_TOKEN_TO_BE_REPLACED

Sorina Pintea announced on Thursday further new changes that will be brought to the functioning of the health care system, including new rules for employment… END_OF_DOCUMENT_TOKEN_TO_BE_REPLACED

The new order on approval and selection procedures for insolvency practitioners is an important step to a very good direction, industry experts say. ANAF is… END_OF_DOCUMENT_TOKEN_TO_BE_REPLACED

Romania lost to Estonia in the final vote to get the non-permanent member position within the UN Security Council for the period 2020-2021. On Friday,… END_OF_DOCUMENT_TOKEN_TO_BE_REPLACED

eMAG hopes to get the opinion of the Hungarian Competition Council over the next two months for the acquisition of Extreme Digital, the market leader… END_OF_DOCUMENT_TOKEN_TO_BE_REPLACED