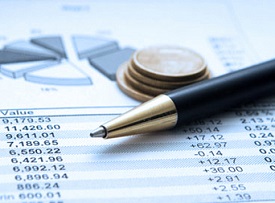 The ratio between the net revenues coming as direct investment in the country and the (chronically negative) current account of Romania’s balance of payments has deteriorated rapidly over the past three years and is heading to values that no longer allow supporting the real value of the national currency relative to the European single currency.

From values that were well above the equilibrium level, it reached in 2016 slightly below the parity level and in the first half of the current year, according to the most recent report on the balance of payments, we have reached only 67%, about a quarter the level recorded in 2014, the year when we managed to bring the economy back to the 2008 level.

Unfortunately, the growth of domestic consumption resumed to unsustainable rates even though we came out of the crisis (reminder for those who have already forgotten) especially based on exports and the care of not increasing salaries beyond the possibilities given by the increase in work productivity.

Rebalancing the engines of growth by cranking up the internal engine to see benefits in the population’s pockets has passed from one extreme to the other and the balance of transactions with international goods, as it appears in the statistical section of the BNR Bulletin 6/2017 and the recent release on the balance of payments evolution has clearly deteriorated. 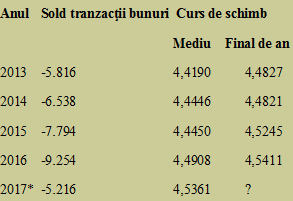 From a minus of just over five billion euros a year in the external trade of commodities, only four years ago, we are now heading to a double level and it is almost certain that we shall exceed the psychological threshold of EUR 10 billion a year. (And the problem is that this difference is financed by loans). Which says quite a lot about the competitiveness of Romanian products given that, of course, the GDP has not doubled in the meantime.

And that not only in relation to the achievements of other European Union colleagues from our region but even on our own market. Where, somewhat paradoxically, when it comes to medium and high technology and/or reasonable prices for low technology, most Romanians prefer imported products.

As for the possibility of strengthening the exchange rate, namely the decrease in the ratio between euro and leu (as you can easily verify that it has been systematically forecasted two or three years ago in the specialized committee), there can be no question of that anymore. Instead, we might rather ask ourselves where we get reach at the end of this year.

In which the average level of 4.49 lei/euro for 2017, also applied for drafting the budget will be impossible to maintain. With the respective consequences in terms of reaching the hypothetical GDP of EUR 181.9 billion and the increased costs of public procurement (there is not much of it anyway because of the lacking allocation of the funds needed). 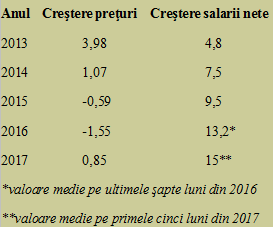 Where we can see a growing gap and the cumulative value for the last four years cerates hilarious results.

Respectively, an increase in wages of almost 60% corresponds to a price increase of less than 4%, in a context of quasi-stable conditions for the national currency, which should be a reason for great satisfaction and not exacerbation of claims received from increasingly more social categories. Especially from some who do not contribute to the daily work, let alone the production processes.

So, maybe we wake up at the eleventh hour and stop the tendencies of destabilizing the economy. We should first strengthen the tremendous results in raising the living standards in recent years and then dream of the bearskin. Bearskin that risks breaking along with the macroeconomic stability.