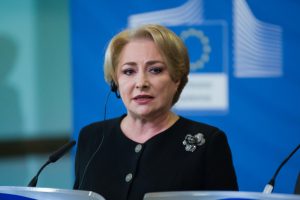 There are clear signs that the lobbying action launched by the ruling coalition in Brussels in favour of the government in Bucharest will end with a resounding failure.

Prime Minister Dancila’s visit to Brussels, meetings with political leaders from the left to the right of the political spectrum, and discussions held by C.P. Tariceanu with ALDE leaders seem to have not convinced anyone.

With a view to convincing European political groups that Romanian reality does not justify the opportunity to adopt a resolution on Romania, as MEP Maria Grapinni explained at Antena 3 on Tuesday, PSD and ALDE decided to send Prime Minister Dancila to Brussels for discussions with officials from the four main European political families.

Prime Minister Dancila met on Tuesday with PPE and S&D leaders and on Wednesday had talks with leaders of ALDE and Greens, as well as a meeting with the parliamentary group of socialists and democrats, where Minister Tudorel Toader also took part.

In order to promote the action, the Government posted on YouTube short „mute” videos from the first two meetings and issued press releases that included only the Romanian approaches.

However, the views of Premier Dancila’s discussion partners cannot be censured, so we know that the Prime Minister failed to change the opinion of PPE or ALDE and it is hard to assume that she could persuade the Greens, a political group that called for the debate on the Bucharest issues in the European Parliament.

Socialists also ask for explanations regarding the referendum

On Wednesday cursdeguvernare.ro asked for a position from the spokesperson of the President of S&D group, Udo Bullmann, following the discussions with Prime Minister Viorica Dancila held on Tuesday. The answer has not been sent before the publication of the article.

Instead, with the help from Catalin Ivan, who posted on Facebook a footage of Premier Dancila’s discussions with socialist MEPs, we find out that former colleagues in the European Parliament were surprised and dissatisfied that the PSD government is organising a referendum on the traditional family.

MEPs accused PM Dancila of not informing the political group and that the move conflicts both with the EU standards and the S&D’s official position on the matter.

Prime Minister Dancila’s reaction captured by Catalin Ivan’s filming: „It is not directed to a certain sexual orientation in any way. We shall see what will come out if they will come to vote. The Social Democratic Party will not campaign … it will not campaign … It is everyone’s duty to take action to show what this referendum means. But we will not make a campaign to support a decision or another.”

Manfred Weber (PPE): We have seen in Bucharest people beaten by public security forces, this is unacceptable

After the meeting with Viorica Dancila, Manfred Weber, the leader of the European People’s Party group, expressed his concern about the situation facing Romania in a Twitter message.

„The country is in a situation where the fight against corruption and the independence of the judiciary is under pressure. I saw this week in Bucharest people beaten by public security forces, honestly, this is unacceptable. The fight against corruption is not a luxury; it is an absolute necessity to protect our citizens and the economy from the abuse of the state. That is what we ask the Romanian Government in order to change the course of things. We are here on the side of the citizens of Europe and we will never negotiate on the rule of law,” said the leader of the PPE group from the EP.

European leader of ALDE: There are no answers, only smoke curtains

The meeting with ALDE group leaders was preceded by a meeting that a Dutch MEP held in Bucharest with Romanian leader Calin Popescu Tariceanu. Matthijs van Miltenburg, a member of ALDE group from the EP, wrote on Twitter during a meeting with the chairman of the Senate:

„Tariceanu blames the parallel state, the secret services in Romania for all deficiencies in the rule of law. That is too simple, so I asked what steps he will take to fight corruption, fight against fraud and act for Romania’s development.”

The conclusion of the discussions, synthesized in Matthijs van Miltenburg’s latest post: „There are no answers from Mr.Tariceanu, only smoke curtains.”