The yield of long-term Romanian government bonds was 4.28% in January 2020, according to Eurostat data. That is well above all the other states of… END_OF_DOCUMENT_TOKEN_TO_BE_REPLACED

Net subscriptions in Romanian mutual funds (the difference between invested and withdrawn amounts) became again positive in 2019 after they had been negative in 2018.… END_OF_DOCUMENT_TOKEN_TO_BE_REPLACED

Romgaz (SNG) announced the start of production in the deep area of Caragele deposit (Buzau), the biggest discovered in the last 30 years and one… END_OF_DOCUMENT_TOKEN_TO_BE_REPLACED

Romania managed again to stand out at the EU level by recording the highest level of the public deficit in the third quarter of 2019,… END_OF_DOCUMENT_TOKEN_TO_BE_REPLACED

Quality of jobs: EU country where work does not get you out of poverty 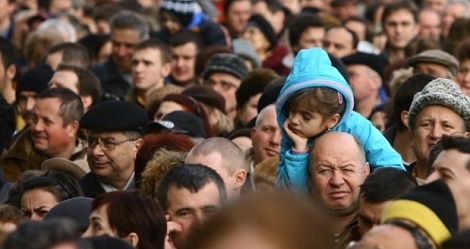 “If you work, you do not have time to make money” according to an increasingly popular Romanian saying, confirmed by the data published by Eurostat. Data which places us at the top of the EU by the proportion of employed people who are in poverty according to criteria uniformly established internationally.

Specifically, as a technical definition, it is about those who, although they work, have an equivalised disposable income below 60% of the national equivalised median income (after considering the social transfers).

The indicator is the reference for the European statistics on income, Social Inclusion and Living Conditions – SILC (as abbreviated in English).

The European rankings with the latest available values (2016 and, for some countries, 2015 but the differences are not significant from one year to the next) of the proportion of poor people who work (obviously, with legal forms and registered under the current regulations in force) are as follows: 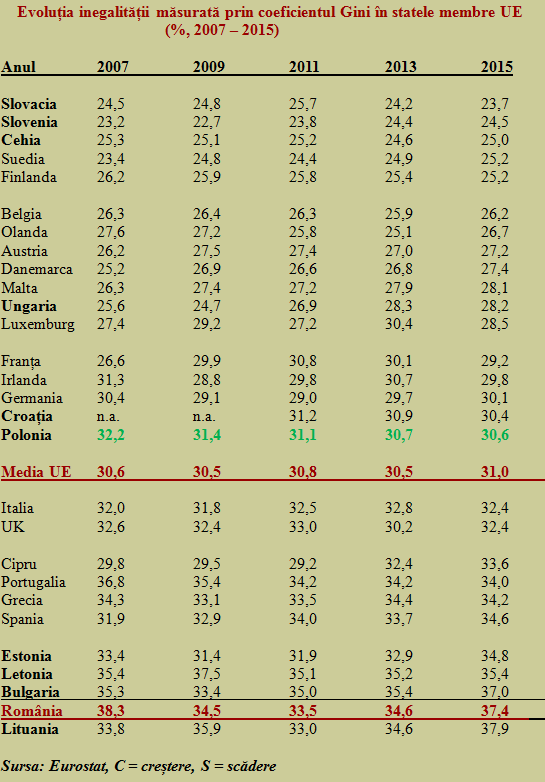 It can be noticed that the value of 21.5%, published by Eurostat for 2016, places us at the top of the European ranking of poor people who work. A ranking where we easily outrun three southern countries, Greece, Spain and Italy (an interesting Balkan-Latin mix from a socio-cultural perspective), as well as two colleagues from the eastern bloc, Bulgaria (our poorer colleague of the EU integration wave has 65% less than us, though!) and Poland (the economy that is similar to ours, 73% below us).

The fact is that we have a lot to do before getting close to the European average, which is less than half our level, even though we shall never reach the Czech Republic or Slovakia. But we can look more closely at Germany or France if only because the experience of Baltic countries, relatively close to each other in terms of GDP per capita measured in purchasing power parities, shows that it is possible to go in that direction.

Evolution over time: EU accession has taken us away from Europe in terms of value assigned to work

Regarding the evolution of the rate of poor employed people in Romania, some conclusions, both surprising and worrying, can be drawn.

However, instead of getting closer to the European average after joining the EU in 2007, we have distanced ourselves from it, which has devalued work and any performance of a useful, taxed activity.

From “only” 19% in 2007, the value went up last year to 21.5% of employees, despite the steady measures of increasing the minimum national wage taken last year. The most ironic thing, the peak of poverty among the employed people has been reached in 2014. Precisely the year when we recovered to the GDP from the reference year of 2008, which confirms on whose expense the economy has been relaunched.

The sudden jump between 2010 and 2011, from where it seems that we are unable to recover, was related to the bizarre action of cutting the wages (without adjusting the pensions, which has generated a major imbalance that still penalizes investments and our future even today), in the same time with and not alternatively to increasing taxation on consumption.

The way in which VAT has subsequently been cut and wages increased has not eliminated the distortion introduced in 2010 not to mention it does not reverse the trend and bring us closer to the European practice.

It is also the reason why working (in the country) is not a goal. It is simply not a minimum guarantee that you end up making big money and earn it in an honest way.

GFG Alliance has committed to invest one billion euros to upgrade Galati steel plant in order to reduce emissions and increase production. Another EUR 1… END_OF_DOCUMENT_TOKEN_TO_BE_REPLACED

The Transport Ministry, as the Intermediate Body in Transport, approved the financing request for the project "Construction of Sibiu - Pitesti highway", Sections 1, 4… END_OF_DOCUMENT_TOKEN_TO_BE_REPLACED

Lack of trust in authorities, corruption and low living standards are the main reasons why young people leave Romania. The data is part of a… END_OF_DOCUMENT_TOKEN_TO_BE_REPLACED

Romania is the EU country with the fewest cars in terms of the number of inhabitants, according to data recently published by Eurostat. We appear… END_OF_DOCUMENT_TOKEN_TO_BE_REPLACED

The Government is preparing the public for the first measures aimed at avoiding the budget slippage, which would be applied by the PSD-ALDE government. News… END_OF_DOCUMENT_TOKEN_TO_BE_REPLACED

French Prosecutor Jean-Francois Bohnert will be appointed as head of the European Financial Prosecutor's Office, a position for which he was heard on Thursday, 11… END_OF_DOCUMENT_TOKEN_TO_BE_REPLACED

Romania recorded the highest road deaths in the EU also last year, with 96 deaths per one million inhabitants in 2018, almost double the EU… END_OF_DOCUMENT_TOKEN_TO_BE_REPLACED

Sorina Pintea announced on Thursday further new changes that will be brought to the functioning of the health care system, including new rules for employment… END_OF_DOCUMENT_TOKEN_TO_BE_REPLACED

The new order on approval and selection procedures for insolvency practitioners is an important step to a very good direction, industry experts say. ANAF is… END_OF_DOCUMENT_TOKEN_TO_BE_REPLACED

Romania lost to Estonia in the final vote to get the non-permanent member position within the UN Security Council for the period 2020-2021. On Friday,… END_OF_DOCUMENT_TOKEN_TO_BE_REPLACED

eMAG hopes to get the opinion of the Hungarian Competition Council over the next two months for the acquisition of Extreme Digital, the market leader… END_OF_DOCUMENT_TOKEN_TO_BE_REPLACED