Phil Hogan: Swine fever in Romania has an impact on neighbouring countries and EU trade in pigs - CursDeGuvernare.ro

Phil Hogan: Swine fever in Romania has an impact on neighbouring countries and EU trade in pigs 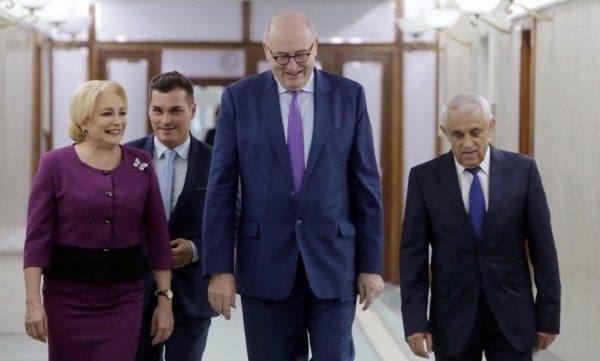 The swine fever epidemics in Romania has an impact on neighbouring countries, on EU trade in pigs and markets, European Agriculture Commissioner Phil Hogan said during a visit to Bucharest.

The European official explained that one of the topics was to identify the red areas and calibrate them so that the epidemics could be controlled:

“I am very pleased by the level of cooperation between the Government and the EC, and we have analysed today how we can help more with veterinary assistance and surveillance measures, which will involve a support within the EC along with Commissioner Vytenis Andriukaitis (on Health and Food Safety – editor’s note).

The most important thing is to stop the spread of the disease. We discussed today with the Minister about the red areas, to see the right focus on relevant areas and I shall report to the relevant Commissioner, Andriukaitis.”

Romania has a problem with what is called PPA regionalization. Hence the differences between the maps communicated by the European Commission and the map from ANSVSA.

In Romania, the outbreak is limited to an administrative-territorial unit, while in the European practice the red zone, with special measures, is established within a range from the outbreak.

It is only in the latest proposals of the National Expert Group that the depopulation around farms within a range of at least 10 km around the agricultural holdings affected by the virus is recommended, with the prohibition to rear pigs in households within this perimeter over a certain period, which has not been established yet.

Now, for instance, in case of two villages located next to each another, special measures are imposed only where the outbreak has been identified, even though the distance from the outbreak to the next village is only one kilometer.

The European Commissioner refers to these logical recalibrations of red areas, in order to obtain results in combating PPAs.

Phil Hogan does not guarantee that EU aid will be granted

Commissioner Hogan also referred to a possible EU financial support, but he did not make any clear statement in this respect:

“The Minister has recently notified me on the intention to obtain the EC assistance to provide financial support for helping farmers in this difficult situation in case they have to stop production because of the swine fever program implementation.

We have discussed the possible solutions today if any financial aid would be possible for the affected farmers.”

Former European Commissioner Dacian Ciolos recently explained that a possible settlement of a share of compensations paid to households and farms, from European money, will depend exactly on Romania’s compliance with biosecurity measures. There is a risk for Bucharest to be refused the European funds, as it has not put in place the minimum necessary measures to combat PPAs.

75% of pigs reared in EU households, in Romania

The fulminating development of the PPA in Romania poses a threat to the whole Europe, especially as it is the country with the largest number of households where pigs are reared, and households are the places that are the least compliant with the rules on preventing the spread of the swine fever.

We are all working to solve this very difficult situation. 75% of the pigs reared in the backyard, in the EU, are in Romania. (…)

The fact that we have a significant level of disease detected over the past few months, 800 farms, is a clear indication that the control is implemented.

Of course, there are a large number of disease cases in such a short time. In the short term, we must stop the spread of the disease.

It has an impact on neighbouring countries, on the EU trade in pigs, on the markets and we need to help farmers take the necessary safety measures.

Last year, 4.406 million pigs were registered in Romania and the total number in the EU was over 150 million.

According to the latest data provided by the National Sanitary Veterinary and Food Safety Authority (ANSVSA), communicated on Thursday, September 13:

The situation on September 6:

By comparing the EU notifications, the situation in Romania is disastrous – 94 new outbreaks have occurred during the last week across Europe, out of which: