According to data provided by INS, in November 2019 Romania recorded a new alarming decrease in monthly industrial production at the level of the negative… END_OF_DOCUMENT_TOKEN_TO_BE_REPLACED

Almost 600,000 Romanian children and young people aged between 0 and 19 years, that is 12.6% of the total Romanian people in this age group,… END_OF_DOCUMENT_TOKEN_TO_BE_REPLACED

On Thursday, the appointed Prime Minister, Ludovic Orban, presented to colleagues from the National Office the document that he will submit to the Parliament, which… END_OF_DOCUMENT_TOKEN_TO_BE_REPLACED

The long-term interest rate fell below zero in the Eurozone and dropped to only 0.28% on average at the EU level, half as compared to… END_OF_DOCUMENT_TOKEN_TO_BE_REPLACED

Net costs for the state with holiday vouchers for public sector employees and the VAT cut for tourism will amount to RON 1,878 million in… END_OF_DOCUMENT_TOKEN_TO_BE_REPLACED 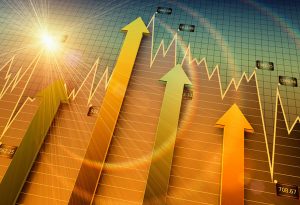 The signal forecast that the National Institute of Statistics announced indicates a record growth rate of 8.8% in the third quarter of 2017 on the gross series and 8.6% on the seasonally adjusted series.

The GDP result in 2017 before the last quarter of the year rose to 7% on the gross series and to 6.9% on the seasonally adjusted series.

In addition, quarterly data have been recalculated upwards for the first and second quarter of this year, from 1.8% and 1.7% respectively, to the 2% threshold.

Compared to which, a new increase of 2.6% appeared in Q3. In short, according to the official data, we saw the highest economic growth since 1989, which leaves China behind, as well as other countries (see table).

If compared to the same quarter of the previous year, we can see that the economic advance (even seasonally adjusted, for the comparability, including with the EU countries) kept speeding up, as seen in the column of quarters from the INS release. Where the third quarter of 2017 has even doubled over the same period in 2016!

These are the official data offered as a signal and around the National Day the so-called signal 2 data will be issued, then the semi-definitive ones and only in 2019 the definitive value calculated for the current year will be set in stone. But two key observations can be made.

Spectacular growth without investment and development

1.First, it is interesting how nobody has realized that we got as far as to our neighbour Bulgaria in our process of harvesting these economic results (there was a joke regarding the reports on the results in the socialism period, which people from older generations know very well) and the population did not feel such an extremely exceptional result, hardly repeatable at the historic scale (if ever!).

A value that would be as honourable as possible, if not equivalent to a sudden deceleration since the speed of the economy would decrease sharply (according to the official data) to about half, from one quarter to the next. That is below the 5% level recorded in the fourth quarter of 2016.

Otherwise, even so, the massive economic growth without investments will become a prestigious Romanian brand, registered as such in the economy treatises.

Finally, it should be noted the negative base effect of the ultra-positive economic growth reported for 2017:

The bigger the economic growth this year, the harder it will be to reach a robust additional growth in 2018, not easier. But let’s wait for the official statistics, which will surely stupefy all international institutions.

The Transport Ministry, as the Intermediate Body in Transport, approved the financing request for the project "Construction of Sibiu - Pitesti highway", Sections 1, 4… END_OF_DOCUMENT_TOKEN_TO_BE_REPLACED

Lack of trust in authorities, corruption and low living standards are the main reasons why young people leave Romania. The data is part of a… END_OF_DOCUMENT_TOKEN_TO_BE_REPLACED

Romania is the EU country with the fewest cars in terms of the number of inhabitants, according to data recently published by Eurostat. We appear… END_OF_DOCUMENT_TOKEN_TO_BE_REPLACED

The Government is preparing the public for the first measures aimed at avoiding the budget slippage, which would be applied by the PSD-ALDE government. News… END_OF_DOCUMENT_TOKEN_TO_BE_REPLACED

French Prosecutor Jean-Francois Bohnert will be appointed as head of the European Financial Prosecutor's Office, a position for which he was heard on Thursday, 11… END_OF_DOCUMENT_TOKEN_TO_BE_REPLACED

Romania recorded the highest road deaths in the EU also last year, with 96 deaths per one million inhabitants in 2018, almost double the EU… END_OF_DOCUMENT_TOKEN_TO_BE_REPLACED

Sorina Pintea announced on Thursday further new changes that will be brought to the functioning of the health care system, including new rules for employment… END_OF_DOCUMENT_TOKEN_TO_BE_REPLACED

The new order on approval and selection procedures for insolvency practitioners is an important step to a very good direction, industry experts say. ANAF is… END_OF_DOCUMENT_TOKEN_TO_BE_REPLACED

Romania lost to Estonia in the final vote to get the non-permanent member position within the UN Security Council for the period 2020-2021. On Friday,… END_OF_DOCUMENT_TOKEN_TO_BE_REPLACED

eMAG hopes to get the opinion of the Hungarian Competition Council over the next two months for the acquisition of Extreme Digital, the market leader… END_OF_DOCUMENT_TOKEN_TO_BE_REPLACED