Mugur Isarescu: We should make a film for Viasat History about treasure in Moscow - CursDeGuvernare.ro

Mugur Isarescu: We should make a film for Viasat History about treasure in Moscow 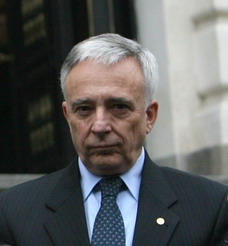 A book should be written or a movie should be made and sent to Viasat History about a treasure evacuated to Moscow, as it is about the history of 92 tons of gold, said the Governor of the National Bank of Romania Mugur Isarescu (foto) on Thursday, quoted by Agerpres.

„I think we should make a simple book, with clear, beautiful photos, or a movie which we should take to Viasat History,” BNR Governor told at Cristian Popisteanu Symposium on the topic „BNR treasury evacuated to Moscow – a historiographical overview and a case study „.

„It is history, though, of 92 tons of gold in coins. Until the First World War, the gold standard was in operation, not bullion, but coins, gold reserves were in coins. So besides the value of the gold worth EUR 3 billion, there is also a numismatic value of one billion,” added Mugur Isarescu.

BNR Governor mentioned that „Moscow II File was made here at the National Bank. We have absolutely no doubt „, and it does not bring new elements, it just brings additional information to Moscow I File.

Mugur Isarescu said that the two files raise a series of questions:

„Moscow I” raises the question of keeping it entirely with the original documents during the Soviet occupation, given that Soviet advisors had free access to the building during that period.

„Moscow II File” may have been taken out of the National Bank in an attempt to save it, according to Mugur Isarescu.

„We can only guess how it disappeared; maybe it has been considered that it needed to be saved or it was not good to remain at the National Bank, but we know that in 1955 when the BNR archive fund was reorganized under the State Archives, Moscow II File was no longer in the Bank. So it probably left from here at the end of the 50s because the label with the new name of the institution Banca RPR, the State Bank appears only on the cover of Moscow I Folder,” Mugur Isarescu said.

He also stated that it is not known how the file got in the chest, but it can be assumed that it was created at the National Bank of Romania between 1933 and 1942. Isarescu congratulated the officers from the Brigade for Combating Organized Crime Bucharest, who helped recover Moscow File II.

In March of this year, BNR stated in a release that it has been given some documents dated in 1941 when bank representatives from that period made an inventory for the Romanian state’s leaders in power at the time regarding the treasure situation, which the BNR sent to Moscow during the period 1916-1917.