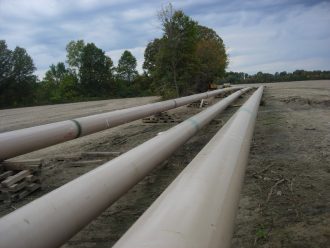 The Ministry of Energy issued for Transgaz the construction permit for the consolidation of the transport system between Onesti (Bacau) and Isaccea (Tulcea) and for the capacity to reverse the gas flow on Isaccea-Negru Voda pipeline, according to a release issued by the ministry.

The project „can contribute to creating a transport corridor between the markets of Greece, Bulgaria, Romania and Ukraine, as the interconnection between Greece and Bulgaria will be obtained this way,” said the source quoted.

The project will also allow directing some gas volumes to the Republic of Moldova, according to a document from Transgaz, which operates the national gas transport system (SNT).

„By implementing the Project, supplying Bulgaria can be ensured from the National Transport System on the SNT corridor – Onesti – Sendreni – Isaccea – Tranzit 1 – Negru Voda. Also, in the event of the gas takeover from the Black Sea continental shelf in the Transit 1 pipeline, it is possible to simultaneously ensure the supply in Bulgaria, the supply in deficient areas of SNT, and direct a quantity of gas to Podisor – Mosu or export a quantity of natural gas to Republic of Moldova,” says Transgaz in the project presentation document issued in December 2017.

The works would take place between 2018 and 2019. This year, Phase I should be completed and the project should put into operation, and the second part of these works is to be completed in 2019.

The total value of the works is almost RON 17 million.

„The project we have just authorized will allow Romania to supply Bulgaria with natural gas from its own production, but will also allow Transgaz to take over natural gas from the Black Sea continental shelf. The benefits of the project will also be felt in terms of gas supplies to different regions of the country, especially during the winter when, due to low temperatures, consumption increases very much,” says the Energy Minister Anton Anton in the release mentioned.

The total value of the works is almost RON 17 million.