The net import of electricity in first 11 months of 2020 was already higher by 73.9% compared to the whole 2019, despite the consumption reduction,… END_OF_DOCUMENT_TOKEN_TO_BE_REPLACED

Analysis: How pandemic changed the consumption and saving habits in Romania

The pandemic has significantly changed the consumption habits but also the saving habits of Romanians, according to the INS data analysed by cursdeguvernare.ro. The saving… END_OF_DOCUMENT_TOKEN_TO_BE_REPLACED

Over the last years, the United Kingdom has been Romania’s most important foreign trade partner, with which we have managed to record a significant trade… END_OF_DOCUMENT_TOKEN_TO_BE_REPLACED

The Ministry of Public Finance has contracted government securities worth RON 1.2 billion, of which state bonds maturing in October 2030 covered EUR 801.8 million,… END_OF_DOCUMENT_TOKEN_TO_BE_REPLACED

The imminent future of the economies of Central and Eastern Europe, the end of the tunnel for the Covid crisis, Eastern convergence – how does… END_OF_DOCUMENT_TOKEN_TO_BE_REPLACED 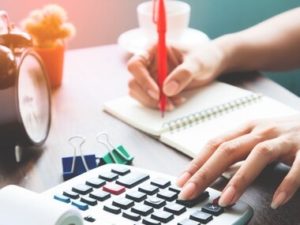 Budgetary and institutions’ operational constraints generated by the pandemic have subjected the Romanian tax system to significant tensions, which proved its limits, notes the international audit and consulting firm Mazars, in a regional study on tax frameworks in Central and Eastern Europe.

However, this situation has laid the bases for the development of the entire tax system in the sense of generating transparency in this activity, reducing bureaucracy and increasing digitalization, tax collection and voluntary compliance, experts believe.

“A first step was recently taken by implementing the legal framework necessary to connect all cash registers to tax authorities’ servers and advancing discussions on using SAF-T standard. The latter is expected to be tested in a pilot program for large taxpayers early next year. Another measure taken in the current difficult context is granting a general amnesty to all taxpayers, which furthermore announces a potential intensification of tax audits for the rest of 2020,” said Lucian Dumitru, Senior Manager, Tax Advisory, Mazars Romania.

Romania, at the top of the salary increases in the region

Taxes and income contributions, as well as employment taxes for countries analysed, will continue to decline in 2020 but their volume varies significantly from one market to the other. Countries in the region do not have a uniform approach to income taxation: some use a flat income tax rate, while others have progressive income tax rates.

The regional average of labour costs for the employer represents a total of about 160% of net wages. The employer’s share of taxes and contributions, compared to gross salaries represents on average 16% but the real difference between the lowest and the highest level exceeds 30%. This also shows the limitations existing in the comparability of individual tax systems.

The analysis of employment taxes also shows that countries in the region have significant differences in the level of wages. Until 2020, there has been a considerable increase in the minimum wages calculated in Euro, with the most important increase in Ukraine. Also here, as well as in Romania and Bulgaria, the average wage increase in the private sector was the highest, exceeding 30% but in order to have a complete picture, we should take into account that exchange rate fluctuations for national currencies might also contribute to this increase, the firm notes. 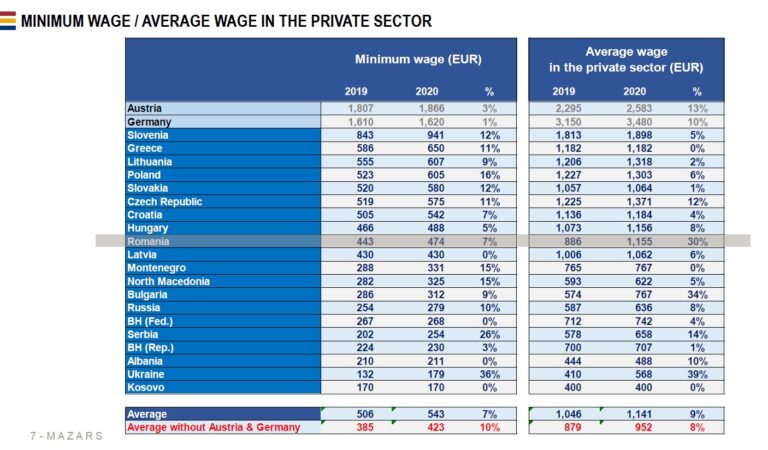 In the case of value-added taxes, the average standard rates were around 20% in 2020 in this region. The usual VAT rates of 25% and 27% applied in Croatia and Hungary, respectively, are still particularly high; and the 1 percentage point reduction recently planned in Croatia was not implemented in 2020.

“Governments are trying to use digital technology and tools to take action against tax evasion. In Hungary, the recently introduced measure of mandatory data reporting for online invoices had a visible positive fiscal impact; therefore, we can expect the expansion of similar solutions in the region, ” said Heléna Csizmadia, Tax Director, Mazars Hungary.

Before the pandemic, governments planned their revenues based on consumption increase, so more attention was paid to indirect taxes.

“Value-added tax has become perhaps the most significant source of revenue for state budgets in recent years, and this may change due to the economic recession caused by the pandemic,” added Heléna Csizmadia, Tax Director, Mazars Hungary.

The average corporate tax rate is 16% in the markets under survey. However, there is a difference of more than 20 percentage points between the minimum and maximum corporate tax rate in the region. The European Union is trying to limit tax competition and create a common framework for profit taxation in the Member States. An important tool for this purpose is the regulatory action called the Directive against tax avoidance (ATAD), officially known as Directive (EU) 2016/1164. Most of its provisions must be applied by the Member States as of 1 January 2019.

With regard to the corporate income tax, Lithuania and Hungary still do not apply a withholding tax on capital incomes, and Albania has significantly reduced the rate of withholding tax on dividends as of 1 January 2019. Also since then, corporate taxation for holdings has been available in Hungary, previously only applied in Austria, Poland and Bosnia and Herzegovina.

Luca de Meo (foto), the new general manager (CEO) of Renault group, considers that Dacia project proved to be a miracle and that no one… END_OF_DOCUMENT_TOKEN_TO_BE_REPLACED

A former Soviet airbase in central Romania could become a hub for US Air Force operations in south-eastern Europe, where the Pentagon is seeking to… END_OF_DOCUMENT_TOKEN_TO_BE_REPLACED

Nuclearelectrica's Board of Directors has been mandated to initiate proceedings to terminate negotiations with China General Nuclear Power Group (CGN), as well as legal effects… END_OF_DOCUMENT_TOKEN_TO_BE_REPLACED

Romania imported an amount of electricity of almost 796 GWh in the first month of this year, by more than 36% above what it exported… END_OF_DOCUMENT_TOKEN_TO_BE_REPLACED

GFG Alliance has committed to invest one billion euros to upgrade Galati steel plant in order to reduce emissions and increase production. Another EUR 1… END_OF_DOCUMENT_TOKEN_TO_BE_REPLACED

The Transport Ministry, as the Intermediate Body in Transport, approved the financing request for the project "Construction of Sibiu - Pitesti highway", Sections 1, 4… END_OF_DOCUMENT_TOKEN_TO_BE_REPLACED

Lack of trust in authorities, corruption and low living standards are the main reasons why young people leave Romania. The data is part of a… END_OF_DOCUMENT_TOKEN_TO_BE_REPLACED

Romania is the EU country with the fewest cars in terms of the number of inhabitants, according to data recently published by Eurostat. We appear… END_OF_DOCUMENT_TOKEN_TO_BE_REPLACED

The Government is preparing the public for the first measures aimed at avoiding the budget slippage, which would be applied by the PSD-ALDE government. News… END_OF_DOCUMENT_TOKEN_TO_BE_REPLACED

French Prosecutor Jean-Francois Bohnert will be appointed as head of the European Financial Prosecutor's Office, a position for which he was heard on Thursday, 11… END_OF_DOCUMENT_TOKEN_TO_BE_REPLACED

Romania recorded the highest road deaths in the EU also last year, with 96 deaths per one million inhabitants in 2018, almost double the EU… END_OF_DOCUMENT_TOKEN_TO_BE_REPLACED

Sorina Pintea announced on Thursday further new changes that will be brought to the functioning of the health care system, including new rules for employment… END_OF_DOCUMENT_TOKEN_TO_BE_REPLACED

The new order on approval and selection procedures for insolvency practitioners is an important step to a very good direction, industry experts say. ANAF is… END_OF_DOCUMENT_TOKEN_TO_BE_REPLACED