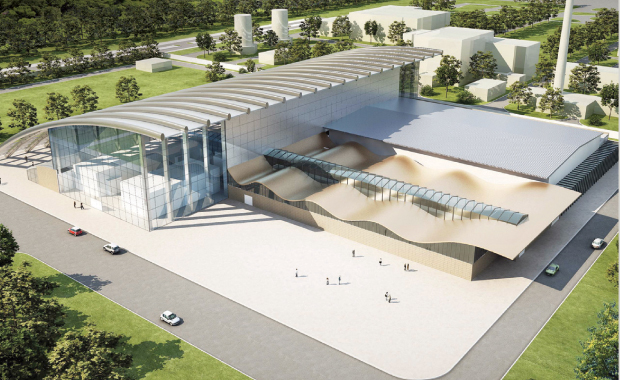 Magurele, a small town in the immediate vicinity of Bucharest, will soon house the largest laser in the world. Government and people hope that the town having about 10,000 inhabitants and a rural aspect will become in a few years the Laser Valley – Land of Light, the main Romanian innovation centre and a smart city that will centralize fundamental research, but also draw together start-ups from cutting edge technology.

EUR 280 million is the amount for building the largest laser in the world.

The town hosts the „The Institute for Lasers”, where the most powerful laser in the world is to be built – a system with two arms of 10 petawatts, equivalent to 10% of the Sun’s power each. In addition, the platform includes a high-intensity gamma system, the two components allowing experiments that could not be conducted until now.

The most expected of them is the particle acceleration experiment – while at CERN acceleration is obtained by magnets and electromagnets, on long distances, in Magurele they will try obtaining acceleration by using the laser, from 2019, on distances of microns or millimetres. This will be a much cheaper method than the one used at CERN.

The installation, which is unique in the worlds, will provide answers to many scientific curiosities, such as the way of interaction between extremely powerful laser beams of light with the matter and, as people tell, will probably offer many unique answers to topics that were not solved yet because there was no possibility to make experiments.

So far, the international committee in charge of selecting the proposals for experiments, all unique, has not rejected any project from those presented in the program set when ELI – NP was accepted.

This is a scientific opportunity that attracts numerous high profile professionals in the field to Magurele, and those who already arrived here at least for a visit are confident that the time comes when the Nobel for physics will be taken with experiments conducted in Magurele.

For the Extreme Light Infrastructure for Nuclear Physics (ELI-NP), the staff structure must reach slightly over 200 researchers with different specializations and practical experience, when the activity will start (2019).

For now, only 100 researchers have been employed, of more than 1,000 candidacies submitted, but the job ads and proceedings run continuously, to overcome potential unexpected obstacles caused by legislation.

Of these, about 50 are Romanian researchers working abroad (with seniority and positions in research at prestigious institutions) and foreigners who want to take advantage of the potential that the infrastructure offers. Researchers have already arrived from France, USA, Germany, Italy, Japan, Vietnam, Argentina, Russian Federation, Bulgaria, India, Poland, Indonesia, Israel and China.

The hiring procedure is long and extremely complicated, especially when it comes to candidates from outside the European Union.

There are problems with the recognition of diplomas and certificates and the procedure for obtaining a work permit.

Because of the current legislation, people with high expertise (doctors of science, internationally recognized and authors of important papers published in the field), must submit for the exam and the employment file the baccalaureate and bachelor’s degree certificates, legalized, as well as the transcripts, explained Raluca Iuliana Stoica, Head of the Human Resources Department to cursdeguvernare.ro.

Another file needs to be submitted for the recognition of diplomas and certificates. The so-called automatic recognition, recently introduced for a list of prestigious universities, is not quite so automatic. Recently, a memo has been sent to the Ministry of Education, containing solutions to address these strange situations arising in a country where prestigious researchers usually take a route in reverse, i.e. they emigrate.

The law requires the Institute to complete the employment procedure within 45 days, but formalities for the equivalence of educational diplomas and for next steps take longer. The solution found by the Institute was to publish announcements continuously and start timing the undergoing process after completing the early steps.

Also, vacancies launched should be announced at the Ilfov County Agency for Employment (AJOFM Ilfov) that certifies that the Institute has the right to run a hiring process because no Romanian citizen has expressed any willingness.

„If we seek a senior researcher, you can realize that we do not find her via AJOFM. Such employment means at least 10-year length-of-service in the field, PhD, etc.

Obviously, there is no such person at the Ilfov Employment Agency (a predominantly agricultural county – editor’s note). At some point, a Romanian expressed her willingness and asked for details about this job and we had problems because of this. They could not give us the certificate, although we needed 10 senior researchers. We said ok, let’s suppose that one of the jobs could go to the Romanian candidate, but let us run the procedure for the other nine jobs … That was not possible … It is very complicated, „said Raluca Iuliana Stoicea for cursdguvernare.ro.

For the fluctuating staff (such as doctoral and post-doctoral students, who come for internships), we have fixed-term contracts, but for the senior positions and those in engineering, operating infrastructure, contracts are for indefinite duration. „It depends on the position and the task that the person has,” says Raluca Stoicea.

Authorities want to transform the rural area with Magurele into a socio-economic centre that will create development and innovation based on the Silicon Valley model.

Now, although the ELI-NP project has significantly advanced and there are only two years left before starting the experiments, there is no infrastructure connecting the little town to the Henri Coanda International Airport and downtown Bucharest.

The town is crossed by the Bucharest’s ring road, not modernized yet, which it takes a few hours to drive from one end to the other during the rush hours.

The road connecting Bucharest to the Institute, full of holes, has been modernized only this year in September, before the visit of French President Francois Hollande to the platform.

Authorities have denied that the rehabilitation has anything to do with the visiting French President, arguing that it was just a coincidence. The truth has surfaced a few days after the French President’s stopover in Magurele, when the road workers started to uncover the drain covers that had asphalt on them because of the haste to complete the work.

The small town has already started to develop – first supermarkets have been open in the last year and recently even the first hypermarket and the newly developed residential district has Western standard apartments for rent and intends to extend the offer.

In October, there has been a debate organized with officials from several fields right on the topic of integrated development – although there is only little time left till the infrastructure becomes operational and there was much talk about the local development that the ELI project can generate, almost nothing has been done.

According to research estimates, the investment in the Magurele laser can generate an annual turnover of over EUR 600 million in the area, said Prime Minister Dacian Ciolos.

„A governance concept is needed, to involve several institutions, because people so far focused more on the scientific aspects, the construction of this facility that will host the laser, the gamma component (…)

Around the spring, we started to realize that we shall end up having the laser ready, but cannot capitalize on its full potential. That is why we started developing this concept which is now progressing.

The point of today’s meeting is that beyond the government institutions or the research institutions from the platform we should motivate, encourage and involve the local public authorities and businesses as well.

Investments made there that can generate an annual turnover of over EUR 600 million could also create up to 6-7000 jobs with high added value,” said the Prime Minister, in mid-October. 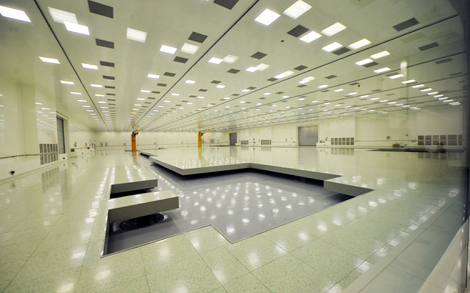 The first components of the most powerful laser in the world arrived to the Extreme Light Infrastructure – Nuclear Physics (ELI-NP) in August.

The laser has been built in France by Thales company, which won the contract worth EUR 60 million.

The huge equipment has been completed late last year and is now transported to Magurele, where they will assemble by 2018 hundreds of pieces of the two-PW 10 beam structure (10 petawatts). For comparison, the existing lasers worldwide have a total power of 1 PW.

The room where the laser will be installed has an area of 2,000 square meters – here will be the system of mirrors, lenses, pumped lasers, compressors, etc. which will take over the initial beam of light and amplify it up to a tenth of the Sun’s power.

This is the only European centre for high-level research in the field of ultra-high power lasers and laser-matter interaction.

The project will provide scientists, engineers and specialists, with pulses exceeding 100,000 times the total capacity of all the existing power plants worldwide.