Important crossroads: Last ones in EU by public sector employees, but next to Germany by industry in gross value added. Where are we heading to? 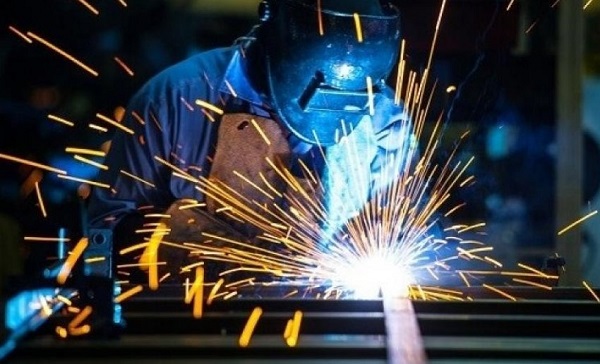 Romania ranks last among the EU member states by the share of public sector employees in the total workforce, according to data published by Eurostat for 2016. That, although we registered the highest increase in the percentage of public sector workers compared to 1995, from slightly above 6% to 14% last year. But that is compared to an EU average of almost 24%.

In this context, the decision to freeze public sector employment, except for very well-founded cases, appears to be paradoxical. Especially because we do not excel at the number of medical staff or teachers in relation to the size of the population. Significant increases in public sector wages would be useful, on the one hand, but also affect the possibility of new employment. 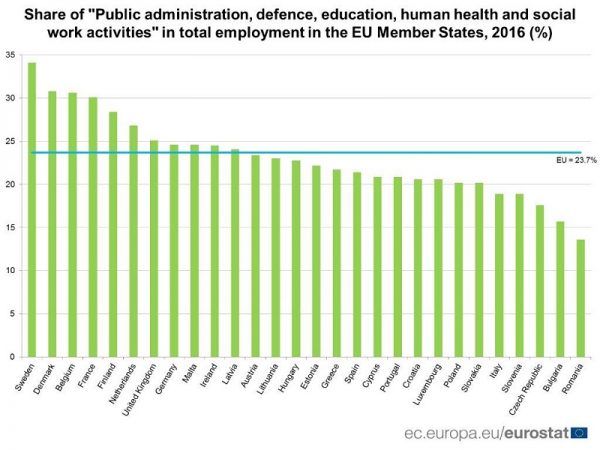 Truth is that the main problem is not that there are too many public servants but that we have too few employees (more precisely taxpayers), a relatively low productivity of those involved in the direct production processes and besides, their remuneration is below the average national wage, an atypical situation for the Western economies.

It is worth mentioning the penalizing effect at the level of the whole economy of a relative productivity in agriculture that currently is only 40% compared to the one registered in 1995. In simple terms, the share of about 40% of the employed population produced then almost 20% of the gross added value (VAB) included in GDP. Now, the remaining 25% still contribute less than 5% of the VAB.

Based on that, we can argue that there has been a much higher productivity gain in industry (the one that sets the tone across the economy) than in agriculture, due to massive investments in the technological upgrade but also that agriculture cannot be left anymore outside some intensive programs for increasing yields and shifting to forms of local industrialization of the production.

By contrast, the industrial sector (the former pile of scrap blamed in the early 1990s) has ensured us (based on a tradition built with great sacrifices at that time, when we ignored the opposition from Moscow) an honourable position in the EU in terms of contribution to the formation of gross value added in the economy.

Respectively, behind some countries like the ones in Central Europe, now transformed into a „workshop of the West” (the Czech Republic, Slovenia, Slovakia, Hungary or Poland), but right after Germany (the Western state that sets the tone in the EU in terms of development model and ahead of Bulgaria or Lithuania. 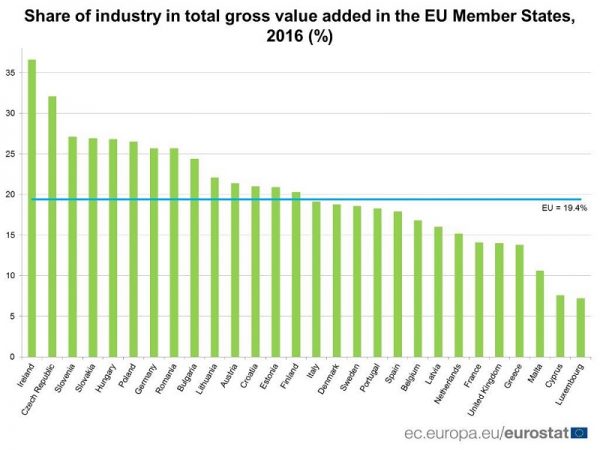 Basically, we have a strongly divided Romania between an industry more developed and performing than we think (not that there would not be room for improvement) and an agricultural sector closer to the 19th than the 21st century. Which gives, by the average resulting from this arrangement, social services of equally low quality, especially for those who carry out an activity of high productivity.

It would be interesting to also see what share of the workforce by sector, in the total economy, obtains these results (we will exclude Ireland, where the Eurostat reporting is affected by strong flaws of reporting large production which is obtained in other member states, related to a lower population and, implicitly, lower workforce), compared to an EU28 average of 15.3%. 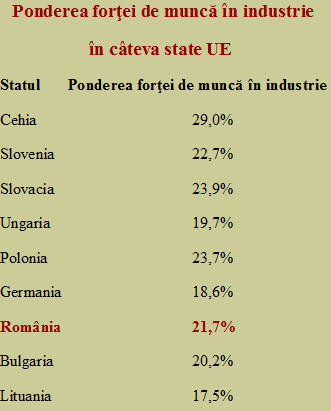 In this context, we should emphasize the importance of this economic sector strategically developed during the times of the planned economy, when a specialized workforce was also formed. The results reported by INS show that almost 26% of the VAB (about RON175 billion out of RON 683 billion in 2016) are obtained with 21.7% of the workforce, the one in the industry.

Which means that this key sector is the driver, through the productivity and high-value base, of the whole economy. It also means that, if we look not only to Germany but also to the neighbouring Hungary and Bulgaria, there would still be room for increasing the share in VAB, on the current structure of the economy. Especially that the productivity in the agriculture sector, where even more people are involved, is low.

Thorny problem of Romanian wages in industry: lower than in public sector

It should be noted that ALL our former socialist colleagues that joined the EU have budget revenues far higher than us as a share of GDP, have wages in the industry sector above the national average, and employ more people in the public sector than us. People whom we mostly support, directly or indirectly, through our activity in the industrial sector.

Last, but not least, we should pay attention to a certain way of looking at the formation of the gross added value, more profitable in the trade and services sectors but much more solid in the industry sector. Here we are dealing with totally different approaches.

Although money is fungible, which means it adds to the same amount in the formation of GDP, it is not quite the same at a qualitative level, for the stability and strength of the economy, which afterwards translate into public services and the standard of living induced by the quality of social services.

That is, we have the Germans in the EU (who set the tone for the former socialist countries around) and the Northern countries, which prefer to contribute a relatively high added value to industrial products and are not very keen to pay much in the trade and services sectors, versus the Latin populations (French or Spaniards or Italians, who tend to add a slightly lower value to tangible results and slightly more to services and trade.

A kind of as much food as possible versus as much entertainment as possible, a phenomenon well described by the prices of transfers in the football domain. Where the largest amounts are spent in Spain and Italy but the result in terms of quality/price ratio is by far higher in Germany.

Now, it depends on us how much we want to increase the quality of state-provided services based on an economy with real industrial force and towards what kind of system we move.