Foreign investment in 2015: strengths and weaknesses 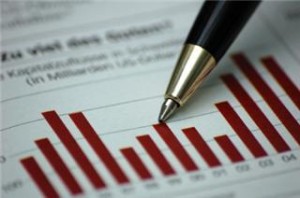 Centralized BNR data shows that 70% of this amount (EUR45,098 million) was contribution to the equity (including reinvested earnings) of foreign firms. The remaining 30% represented the net credit received from abroad (EUR19,335 million).

This is the result of the overall FDI increase in all fields of activity by more than four billion euros, while construction and real estate have gained nearly half of this increase (+ EUR 1.96 billion). 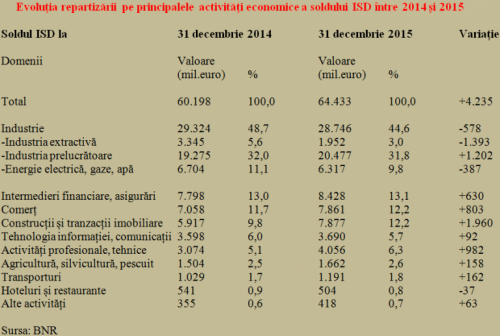 Professional and technical activities represented a point of obvious interest for the foreign investors and contributed almost one billion euros, which is not bad at all if we consider our target to develop higher added value sectors. Somewhat surprisingly, the IT segment’s position has plus of only 92 million, which could raise questions.

Contrary to the public rhetoric and idea that we have a country with a remarkable tourist potential, the hotels and restaurants segment shows a minus EUR 37 million compared to the previous year.

To which much larger negative amounts are added from the extractive industry (about EUR -1.4 billion ?!) and electricity, natural gas and water (with a declining trend toward about EUR 400 million).

Evolution of productive activity of the FDI companies

The productive activity of the companies with foreign capital has been increasing throughout the period 2009 – 2015, except for a slight turnover decrease in 2014 and a temporary decrease of employed in 2010 (see table). Moreover, 2015 marked the point of crossing the threshold of 1.2 million people who found work in the FDI enterprises.

Overall, foreign direct investors in Romania obtained net income last year amounted to EUR 3,746 million. The amount is the result of EUR 6,038 million profits, less the reported losses worth EUR 3,129 million (balance of EUR 2,909 million). It should be mentioned that dividends distributed to foreign investors amounted to EUR 2,399 million and EUR 510 million represents the reinvested profit.

Net interest income amounting to EUR 837 million paid on loans granted by parent firms to their enterprises in Romania added to the balance of approximately EUR 2,9 billion.

Related to the size of the economy, we note that, on the whole, net income by foreign investment in Romania represented in 2015 approximately 2.2% of GDP.