The general consolidated budget registered in the first half of the current year a deficit of about RON 45 billion, equivalent to 4.2% of the… END_OF_DOCUMENT_TOKEN_TO_BE_REPLACED

At the European level, there is an agreement to introduce a “modest” tax on disposable plastic, a first source of income to support the repayment… END_OF_DOCUMENT_TOKEN_TO_BE_REPLACED

Long-term interest rate for Romania fell by almost one percentage point in just two months, according to data released by Eurostat. After increasing up to… END_OF_DOCUMENT_TOKEN_TO_BE_REPLACED

Budgetary and institutions’ operational constraints generated by the pandemic have subjected the Romanian tax system to significant tensions, which proved its limits, notes the international… END_OF_DOCUMENT_TOKEN_TO_BE_REPLACED 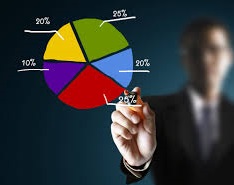 Some milestones to be considered

It remains quite unclear how the payment of salaries could be covered from the state budget by the end of 2017, since the amounts allocated are only 0.8% higher than in the previous year and wages have already been increased during 2016 and early 2017 for some broad categories of personnel, let alone the 16% increase in the minimum wage.

It is noteworthy that the amounts allocated for the payment of interest on public debt are only 0.7% higher than in the previous year, while the quotations on the capital markets seem to be growing and the less good image of the country translates into an increase in yields of government securities (difficulties in contracting new loans at relatively low-interest rates to roll over the debt are already obvious). 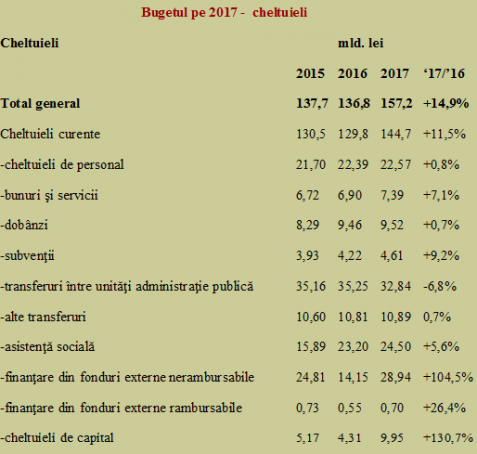 It is surprising the decrease of nearly 7% of the amounts allocated for transfers to other public administration entities, in other words, the money mainly given to support the social security (pensions) and health insurance budgets, unable to cover the financing needed from the specific contributions to these budgets.

We should also pay attention to the provision on the transfers from the state budget to local budgets for financing the medical equipment and communication equipment for health emergencies, which follows a negative trend from 109.5 million lei in 2015, to 74.5 million lei in 2016 and only 7.8 million (90%!) in 2017.

The 5.6% higher allocation to the social security, although with a strong point in being closer to the estimated economic growth, does not keep the pace with the overall expenditure growth. A surprising fact, given the political orientation and the perception created when the economic program has been presented.

Incidentally, although it appears to have drastically tightened the belt in these areas, the budget provides for an increase of 123.1% over the previous year, from 0.80 billion lei to 1.78 billion, in the transfers aimed to cover the contributions of pensioners, recently exempted from payment.

What is significant is that the transfers for financing the investment project of the subway, after they halved in 2016, are now completely lacking and the national program for local development, which reached some momentum last year, will now “benefit” from a discount of -46.4% and reach from 4.23 billion lei to 2.27 billion lei.

Important to keep in mind, as a conclusion

It is noteworthy, as a conclusion: on the revenue side, any slippage in inflation (higher amounts collected from taxes) and/or in the exchange rate (via the money coming from the EU) might prove helpful in achieving the revenue target; on the expenditure side, the risk is asymmetrical and the only possibility related to the budget is to exceed the planned levels. However, the room for maneuver is almost non-existent and we are at risk in the event of unforeseen changes in the international economic environment.

Basically, we are dealing with impairing the development and the perspective of increasing the future revenue, to force providing populist benefits, unsustainable in the long term.

That means a kind of inverted socialism, as a capitalism in a democracy of some narrow interests.

Luca de Meo (foto), the new general manager (CEO) of Renault group, considers that Dacia project proved to be a miracle and that no one… END_OF_DOCUMENT_TOKEN_TO_BE_REPLACED

A former Soviet airbase in central Romania could become a hub for US Air Force operations in south-eastern Europe, where the Pentagon is seeking to… END_OF_DOCUMENT_TOKEN_TO_BE_REPLACED

Nuclearelectrica's Board of Directors has been mandated to initiate proceedings to terminate negotiations with China General Nuclear Power Group (CGN), as well as legal effects… END_OF_DOCUMENT_TOKEN_TO_BE_REPLACED

Romania imported an amount of electricity of almost 796 GWh in the first month of this year, by more than 36% above what it exported… END_OF_DOCUMENT_TOKEN_TO_BE_REPLACED

GFG Alliance has committed to invest one billion euros to upgrade Galati steel plant in order to reduce emissions and increase production. Another EUR 1… END_OF_DOCUMENT_TOKEN_TO_BE_REPLACED

The Transport Ministry, as the Intermediate Body in Transport, approved the financing request for the project "Construction of Sibiu - Pitesti highway", Sections 1, 4… END_OF_DOCUMENT_TOKEN_TO_BE_REPLACED

Lack of trust in authorities, corruption and low living standards are the main reasons why young people leave Romania. The data is part of a… END_OF_DOCUMENT_TOKEN_TO_BE_REPLACED

Romania is the EU country with the fewest cars in terms of the number of inhabitants, according to data recently published by Eurostat. We appear… END_OF_DOCUMENT_TOKEN_TO_BE_REPLACED

The Government is preparing the public for the first measures aimed at avoiding the budget slippage, which would be applied by the PSD-ALDE government. News… END_OF_DOCUMENT_TOKEN_TO_BE_REPLACED

French Prosecutor Jean-Francois Bohnert will be appointed as head of the European Financial Prosecutor's Office, a position for which he was heard on Thursday, 11… END_OF_DOCUMENT_TOKEN_TO_BE_REPLACED

Romania recorded the highest road deaths in the EU also last year, with 96 deaths per one million inhabitants in 2018, almost double the EU… END_OF_DOCUMENT_TOKEN_TO_BE_REPLACED

Sorina Pintea announced on Thursday further new changes that will be brought to the functioning of the health care system, including new rules for employment… END_OF_DOCUMENT_TOKEN_TO_BE_REPLACED

The new order on approval and selection procedures for insolvency practitioners is an important step to a very good direction, industry experts say. ANAF is… END_OF_DOCUMENT_TOKEN_TO_BE_REPLACED