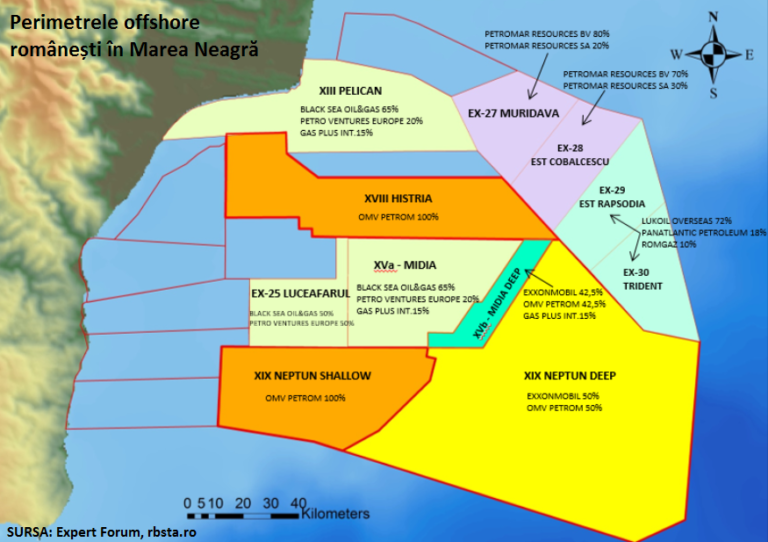 Offshore perimeters in the Black Sea

The Ministry of Economy would be satisfied if the exploitation of natural gas in Neptun Deep perimeter in the Black Sea would start even in 2025, according to a statement of the Secretary of State Dan Dragos Dragan

„At this moment, Romgaz is evaluating the possibility to participate together with Petrom and the final decision will be taken next year. Our wish is for this exploitation to start by 2025 and to have the positive impact on the Romanian gas market in the coming years,” said Dan Dragos Dragan at the Natural Gas Forum, organized on Thursday by Financial Intelligence.

The start of natural gas exploitation in Neptun Deep perimeter in the Black Sea depends on the amendment process of the Offshore Law, whose provisions (especially fiscal) were considered unacceptable by Exxon Mobil and OMV Petrom, the companies that took over the perimeter as lease owners.

The final decision to invest in the exploitation of Neptun Deep has not been taken, Exxon Mobil has decided to sell its stake, and the Romanian state is trying to enter the game through Romgaz.

The amended offshore law could enter into force in a few months at the latest if the elections would lead to a favourable parliamentary configuration.

The fact that Ministry of Economy’s officials do not rule out the delay in starting the operation until 2025 denotes the difficulties in rebuilding the consortium of concessionaires, in a context in which natural gas markets are going through a difficult period that could get longer.

„A balance is needed between encouraging investors and state’s interests to exploit the reserves (…) The window of opportunity has considerably narrowed for the exploitation of Black Sea gas and now at least if they could be exploited (…) I think sometime in early March we could have an approved bill, ” said Deputy Cristina Pruna, vice-president of USR, at the same conference.

Since last year, when Exxon Mobil announced its intention to withdraw from the project, the prices on the gas market have first declined, and then collapsed with the eruption of the coronavirus pandemic.

On the other hand, in the European Union’s energy strategy, natural gas only plays a role in the transition towards renewable energy.

The reserves of the deep-sea Neptune field in the Black Sea are estimated at 42 – 84 billion cubic meters of gas, which is 4 – 8 times more than the current annual production in Romania.

In early October, Niculae Havrilet, secretary of state in the Ministry of Energy, said that the institution he represents has drafted an amendment to the Law on offshore oil exploitation, agreed with Black Sea investors, which will be launched for public debate before the elections but will be approved by the next Parliament.

Among the provisions of the current law with which oil companies did not agree are: