The intergovernmental agreement between the United States and Romania in the nuclear-civil cooperation field has received the European Commission’s approval, and Romania will start construction… END_OF_DOCUMENT_TOKEN_TO_BE_REPLACED

A system which can save Romania from the packages waste and, at the same time, can ensure fulfillment of obligations in the field towards the… END_OF_DOCUMENT_TOKEN_TO_BE_REPLACED

Romanian Leu was much more stable during the pandemic than the currencies of Central European countries with a similar exchange rate regime, the Czech Republic,… END_OF_DOCUMENT_TOKEN_TO_BE_REPLACED

Beware of who bears the burden: Atypical arrangement of wage cost increase in Romania in 2017

It is noteworthy that data have been processed at the country level for the entire economy, less the agricultural sector and public administration, in the enterprises with at least ten employees.

Unlike us, the Czech Republic and Hungary recorded slightly lower increases in the national currency than in euro (8.4% and 9.2%, respectively), as their currencies appreciated against the single currency.

Salary cost in Romania has increased 3.3 times compared to 2004 and has advanced by 50% compared to 2008. However, we remain on the second to last position in the EU by this indicator, by approximately 30% above Bulgaria and 30% below Hungary, our geographic neighbours. The evolution (attention, without the public administration) is comparable to the group of BELL countries mentioned in the table below us. 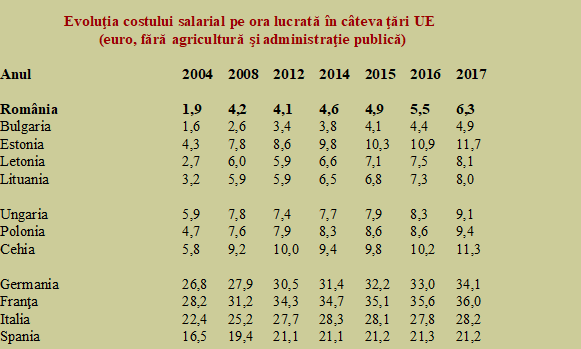 The problem is that we are not part of the small countries that have adopted or have their currency indexed to euro, but we should be closer to the mid-sized economies with floating exchange rate regimes, such as Hungary, Poland and the Czech Republic. These countries are a few years ahead of us in terms of the economic development.

Cost distribution by economic sectors: Attention to who bears the burden!

Moreover, we are differentiating ourselves from these countries, as well as from the Western practice, not only by the sharper increase in salary costs but also by the distribution of the salary costs by sectors of activity.

In our country, the industry registers a level of 95% of the national average, while the values match, at least, in the Czech Republic (100%), Poland and Hungary (101% each).

In Germany (116% ratio between industry and national average), Spain (112%), Ireland (110%), the Netherlands (109%) or France (106%), this positioning essential for the labour market is even clearer. Of course, we also have countries that are pretty much like us (Bulgaria, 96%), Croatia (92%) or even significantly below, like Portugal (87%), but they cannot be examples to follow.

At the same time, we have salary costs higher than the average on the services segment, which is not a European practice, and the non-business area is 18% above the national average, compared to only 2% at the EU average and minus 1% in the Eurozone. 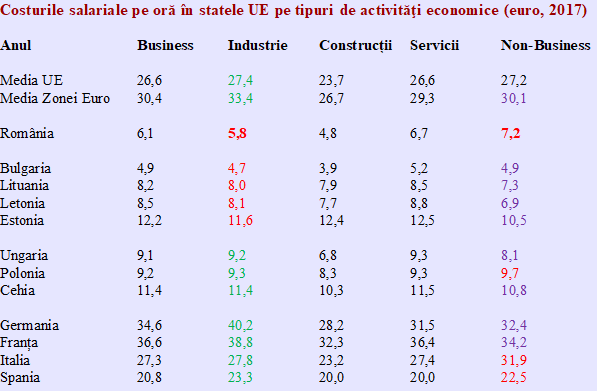 If we highlight the desirable situations in green for the manufacturing industry, in purple for the non-business sector, in relation to the European practice that is successful for the development of these economies, and if we highlight in red the situations that appear to be abnormal in this context, we can easily see what we should be aware of and where we should intervene on to salary costs.

For example, we can see in the case of BELL group, which does not pay more attention to the payment in the manufacturing industry, but at least it does not exaggerate in the non-business area (which, attention, does not include the public administration in the Eurostat report).

An area where the countries that tend to pay better are Poland, the economy that is closest to us in terms of structure and level of development, as well as Latin countries Italy and Spain.

Luca de Meo (foto), the new general manager (CEO) of Renault group, considers that Dacia project proved to be a miracle and that no one… END_OF_DOCUMENT_TOKEN_TO_BE_REPLACED

A former Soviet airbase in central Romania could become a hub for US Air Force operations in south-eastern Europe, where the Pentagon is seeking to… END_OF_DOCUMENT_TOKEN_TO_BE_REPLACED

Nuclearelectrica's Board of Directors has been mandated to initiate proceedings to terminate negotiations with China General Nuclear Power Group (CGN), as well as legal effects… END_OF_DOCUMENT_TOKEN_TO_BE_REPLACED

Romania imported an amount of electricity of almost 796 GWh in the first month of this year, by more than 36% above what it exported… END_OF_DOCUMENT_TOKEN_TO_BE_REPLACED

GFG Alliance has committed to invest one billion euros to upgrade Galati steel plant in order to reduce emissions and increase production. Another EUR 1… END_OF_DOCUMENT_TOKEN_TO_BE_REPLACED

The Transport Ministry, as the Intermediate Body in Transport, approved the financing request for the project "Construction of Sibiu - Pitesti highway", Sections 1, 4… END_OF_DOCUMENT_TOKEN_TO_BE_REPLACED

Lack of trust in authorities, corruption and low living standards are the main reasons why young people leave Romania. The data is part of a… END_OF_DOCUMENT_TOKEN_TO_BE_REPLACED

Romania is the EU country with the fewest cars in terms of the number of inhabitants, according to data recently published by Eurostat. We appear… END_OF_DOCUMENT_TOKEN_TO_BE_REPLACED

The Government is preparing the public for the first measures aimed at avoiding the budget slippage, which would be applied by the PSD-ALDE government. News… END_OF_DOCUMENT_TOKEN_TO_BE_REPLACED

French Prosecutor Jean-Francois Bohnert will be appointed as head of the European Financial Prosecutor's Office, a position for which he was heard on Thursday, 11… END_OF_DOCUMENT_TOKEN_TO_BE_REPLACED

Romania recorded the highest road deaths in the EU also last year, with 96 deaths per one million inhabitants in 2018, almost double the EU… END_OF_DOCUMENT_TOKEN_TO_BE_REPLACED

Sorina Pintea announced on Thursday further new changes that will be brought to the functioning of the health care system, including new rules for employment… END_OF_DOCUMENT_TOKEN_TO_BE_REPLACED

The new order on approval and selection procedures for insolvency practitioners is an important step to a very good direction, industry experts say. ANAF is… END_OF_DOCUMENT_TOKEN_TO_BE_REPLACED