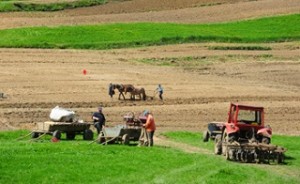 The Common Agricultural Policy was beneficial to Romanian agriculture. The problem is that too few Romanian farmers have managed to grow enough to not suffer if the system changes

Only one thing was working well in Romania in the absorption of the European funds – direct payments to farmers. It was also simple: there was no need for projects – but the simple proof of land ownership. Now these payments have an uncertain future:

Debates at the European level indicate that the Common Agricultural Policy will very soon be thoroughly restructured and the budget allocated to agricultural subsidies will be substantially reduced after 2019.

The news seems to have not yet reached the Ministry of Agriculture, or to Mr. Petre Daea, the minister concerned about the sheep.

The EU agriculture ministers have never spoken against the generous subsidy system that benefits the European farmers, but the Dutch minister Martijn van Dam breaks this taboo.

In an interview with the Dutch press, quoted by Politico, the Dutch politician says cutting the budget allocated to the Common Agricultural Policy – EUR 58 billion annually – is inevitable because of the loss of British contributions to the community budget following the Brexit.

It means, unless the allocation system changes, that farmers will have to do much more to get smaller subsidies.

„I know that not all my colleagues are willing to say this, but I am sure that everyone knows the situation is inevitable,” says Martijn van Dam (photo), who will leave the minister position after the Netherlands will establish a new government.

On the one hand, the UK’s exit from the EU will cause a reduction in the EU budget of about EUR 12 billion after 2019.

On the other hand, the budget allocated to the Common Agricultural Policy (CAP) accounts for about 40% of the EU budget, so those in charge of the agriculture know that they are the first target of cuts.

Even when the reality demonstrates that the EU needs additional funding in areas such as the defence, research, and migration.

Sensitive talks on the structure of the new budget have already started – the EP President Antonio Tajani has completed a document proposing a 50% cut in the funds allocated to the CAP, which caused vehement reactions from the representatives of farmers’ groups and their allies.

The Copa & Cogeca lobbyists counter-attacked, asking for the increase of the CAP funds to protect „the Europe’s gastronomic heritage and the 10 million jobs provided by agriculture.”

Europe is currently grating important amounts to farmers only on the basis of the land they own or the products they deliver.

According to the Dutch Minister for Agriculture, the EU should grant subsidies in the future based on another model, and farmers receive their money if they meet certain criteria. Martijn van Dam believes that the CAP should also take into account the environmental issues it generates and protect better the biodiversity.

The only way to counterbalance the effects of Brexit and the decrease in the EU revenues is to reform the decade-old system, says van Dam. „You cannot reform the CAP without reforming the direct payments system,” the Dutch official said.

The Netherlands is the world’s second largest food products exporter, with sales of EUR 94 billion on the global markets in 2016. The strength of the Dutch agriculture stays in the soil fertility and the high-performance – and often the high-intensity – of the sector.

Despite, or precisely because of, this position, the Netherlands is pushing Brussels to drive the CAP towards the food production rather than basic agricultural products, and the Dutch minister says that it makes sense for the EU to regulate the whole „farm-plate” chain.

The position of the Dutch Minister of Agriculture is unusual given that farmers consider the subsidies per hectare to be sacrosanct, especially because, in many cases, they keep many farmers alive.

The Dutch Minister for Agriculture points though to three fundamental problems that the current system of direct payments causes to the Community agriculture:

„It will certainly be a very fiery debate over the next year and a half in Europe because we are facing very important choices to be made and choosing means changing,” says the Dutch Minister of Agriculture.

The news is twice bad for Romania

The second bad news has a great amplitude:

Despite that the 2017 governments in Bucharest rely on many billions of euros of the European money, so far, the only consistent receipts are for direct agricultural payments – money that, contrary to the usual practice, was included for the first time this year in the budgets for development.

The discussion just starts though: direct payments – where Romania benefited from a high degree of absorption since it did not need to do anything for this money, are not for development but – simpler and more straightforwardly said – for the ownership of an agricultural land.

It is hard to believe that the billions of euros – which small and disoriented Romanian farmers received – were spent on increasing the productivity and not on paying their domestic bills.

As of 2019, cutting the money paid for the simple land ownership could cause big problems both in the Romanian rural areas and especially for the calculations made at Victoria Palace: the principle that there is no such thing as free lunch will be applied even in agriculture.