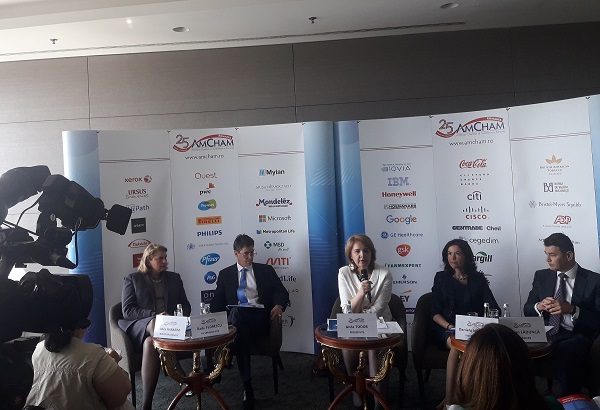 The consistency of the measures needed to encourage public and private investment, as well as proposals for the development of the four major areas considered to be potentially competitive, are included in an AmCham report on the importance of investing in the development of Romania’s economy, published Tuesday, May 22.

The full report can be accessed HERE.

A National Investment Plan is necessary, in the opinion expressed by managers of American Chamber of Commerce in Romania, for “organizing”, in order to stabilise and finance, strategic investments for Romania – especially in the public sector. The model to follow could be, according to AmCham’s report, the Investment Plan for Europe launched in 2014 by the European Commission.

Such a plan could be based, for example, right on the Masterplan in the field of transport, according to the document.

The plan should also include a „coordination, advisory and information part which would provide technical assistance, but also an information platform for the private sector.” The proposals are part of the measures for stimulating the capital demand, a component of the multiple-perspective approach that should, according to AmCham, contribute to developing investment.

From another angle of analysis, from the perspective of Romania’s competitive positioning in the context of global, European and regional change pressures, AmCham identified and proposed the focus on four areas that would have potential:

Agriculture – where there are the following priorities proposed: investment in restoring and modernizing the irrigation system, the need to consolidate agricultural areas and the support to encourage farmers’ associations and promote organic farming;

Digitization – a field where the key point is the interoperability of systems and services with the central and local public administration;

Energy – focus on speeding up the effective implementation of the national energy strategy;

Transport – „Romania already has a Master Plan in Transport and should focus on implementing and identifying financing sources, even though this master plan needs to be improved,” AmCham analysis indicates.

Regarding other relevant aspects of the economic development, AmCham experts believe that human capital market is just as important as the investment market.

They noted that, by figures, the unemployment rate is at a record low, although the quality of jobs should be analyzed. About one-third of them are offered in the public sector, followed by the manufacturing industry.

As AmCham experts warn, from the experience of the advanced economies, the most consistent economic growth comes from stimulating innovation and investment in technology.

As a conclusion at the strategic level, the report indicates that a sustainable model of economic growth is needed, a model that „focuses both on public and private investment, on the systematic development of all forms of capital, as well as on actively providing a basis for the competitive advantages of the national economy.”

In addition, AmCham experts have emphasised on the occasion of the report launch that a theme like the mobilization of capital toward investment could be even a priority for Romania from the perspective of the European Union Council presidency, in the first half of next year.