The Romanian Government notified, on Friday, the Court of Justice of the European Union (CJEU) with three actions in the annulment of the problematic Mobility… END_OF_DOCUMENT_TOKEN_TO_BE_REPLACED

The Ministry of Public Finance (MFP) proposes to regulate a simplified alternative procedure for granting a payment rescheduling of up to 12 months, for the… END_OF_DOCUMENT_TOKEN_TO_BE_REPLACED

Romania’s economy will contract by 4.8% of GDP this year, according to the revised forecast of the International Monetary Fund (IMF), a slightly more optimistic… END_OF_DOCUMENT_TOKEN_TO_BE_REPLACED

Alarm that does not wake anybody up – Lowest revenue as a share of GDP. Consequences for economy, society, everyday life 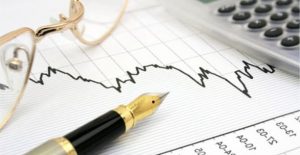 Last year, Romania was the EU country with the lowest public revenue related to GDP (30.5%), with the exception of Ireland (which was in a special situation due to the GDP over-estimation). According to data published by Eurostat, we are at a significant distance in this ad hoc top from the next countries, Lithuania (33.8%) and Bulgaria (36.1%).

Besides, if we had amounts of money collected to the budget similar to them, we would have had no problems in meeting the budget deficit requirement of up to three percentage points of GDP. After a series of declines in revenues started in 2015, we should see only this year some return (RON 296.3 billion at a projected GDP of RON 945 billion, which is 31.3%, according to the most recent budget amendment).

Incidentally, the 2007-2009 statistical series resembles in terms of share of revenues in GDP with the one between 2015 and 2017 and led to the same local minimum level, just above the critical threshold of 30%. A value that shows a state without solid means that would enable it to cover its social commitments and make absolutely necessary investments in infrastructure.

For reference, we present the rankings of European states by the revenue shares in GDP. Ireland was systematically positioned somewhere between 33% and 34% of GDP until three years ago when the relocation of some multinationals in view of  Brexit and the reporting of their results obtained a relatively small economy artificially boosted GDP and reduced the share of public revenues in GDP. 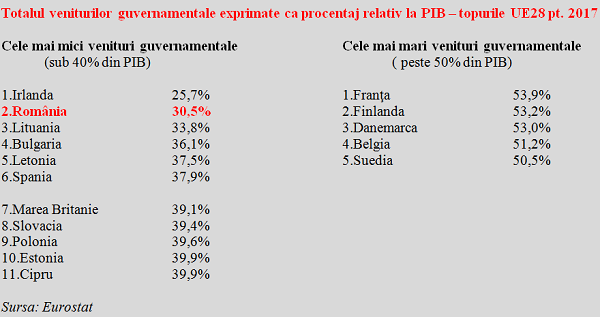 We can see how most European states are positioned by this key indicator for public finances at a level of at least 40% of GDP or immediately below that value.

At the opposite end, France is leading the ranking of the five developed Western states that have exceeded 50% of GDP, precisely in order to be able to carry out broad social policies based on the high level of economic development.

We missed the opportunity to maintain an important budgetary balance requirement (the already well-known MTO or medium-term objective) met in 2015 following a model adjustment.

An adjustment made (note!) by increasing revenue collection to the highest level in the last ten years and limiting expenditure increases to the possibilities resulted from the economic growth.

It may seem paradoxical, but despite the intense media coverage on wage and pension increases, the share of budget expenditure in GDP has also declined since 2015, but less than the decline in revenue collection. It is noteworthy that the major separation between revenues, placed in terms of share of GDP at 68% of the EU average and expenditure, with 73% of the EU average.

Tax relief appears therefore as an economic policy error. Taking both left and right-wing measures at the same time does not mean that the result is a centre policy, but a bankrupting policy.

Data show that we use to exaggerate in either direction in terms of deficit and not notice the opportunities.

Considering how much the adjustment of public finances following the mistakes in 2008 cost us in terms of public debt, we should be more careful.

Expenditure cannot be committed toward 40% of GDP without fitting revenue

Having reached earlier close to a balance in public finances, we have uncoupled and went back to a maximum deficit. There is already foreseen in mid-term an attempt to bring public spending at a reasonable level at the European level (toward 40% of GDP, where they stayed between 2009 and 2011), but the source of funding is not envisaged at the (very low) proportion of the amounts collected to the state budget. In this context, the elementary logic also asks for a breakdown of the measures that can bring revenues also toward 40% of GDP.

It is only much simpler and more pleasant to plan substantially increased expenditure than to also plan the methods to tax the economy and citizens accordingly. Undertaking social policies on major budget deficits and public investment deficits denotes a lack of vision in the medium term and a lack of interest for future generations.

If we look at other countries in similar situations in terms of development level and with a relatively small revenue share in GDP, we find that they did not get to share from a source they did not collect. The proximate trio in the field had inexistent or minor deficits in 2017 and maintained their expenditure under certain limits even though they also have a low public debt. Lithuania (+0.5% of GDP) and Bulgaria (+ 0.9% of GDP) even had surpluses and Latvia recorded last year a deficit of only -0.5% of GDP.

On another level of revenue (toward 40% of GDP and above), the three foreign exchange regime colleagues from Central Europe were somewhat more indulgent in the public management but did not venture toward the 3% threshold and left room for manoeuvre for potential unforeseen problems (Poland and the Czech Republic -1.6% of GDP, budget deficit and Hungary 2% of GDP, but all with revenues of 40% of GDP collected).

On this trend, despite repeated warnings from specialists and international bodies, we are like nobody in terms of balancing the budget. As soon as we estimate a small increase in revenue, we rush into committing even higher expenditure. Therefore, there is no point in wondering whether it will happen to us what does not happen to others.

Luca de Meo (foto), the new general manager (CEO) of Renault group, considers that Dacia project proved to be a miracle and that no one… END_OF_DOCUMENT_TOKEN_TO_BE_REPLACED

A former Soviet airbase in central Romania could become a hub for US Air Force operations in south-eastern Europe, where the Pentagon is seeking to… END_OF_DOCUMENT_TOKEN_TO_BE_REPLACED

Nuclearelectrica's Board of Directors has been mandated to initiate proceedings to terminate negotiations with China General Nuclear Power Group (CGN), as well as legal effects… END_OF_DOCUMENT_TOKEN_TO_BE_REPLACED

Romania imported an amount of electricity of almost 796 GWh in the first month of this year, by more than 36% above what it exported… END_OF_DOCUMENT_TOKEN_TO_BE_REPLACED

GFG Alliance has committed to invest one billion euros to upgrade Galati steel plant in order to reduce emissions and increase production. Another EUR 1… END_OF_DOCUMENT_TOKEN_TO_BE_REPLACED

The Transport Ministry, as the Intermediate Body in Transport, approved the financing request for the project "Construction of Sibiu - Pitesti highway", Sections 1, 4… END_OF_DOCUMENT_TOKEN_TO_BE_REPLACED

Lack of trust in authorities, corruption and low living standards are the main reasons why young people leave Romania. The data is part of a… END_OF_DOCUMENT_TOKEN_TO_BE_REPLACED

Romania is the EU country with the fewest cars in terms of the number of inhabitants, according to data recently published by Eurostat. We appear… END_OF_DOCUMENT_TOKEN_TO_BE_REPLACED

The Government is preparing the public for the first measures aimed at avoiding the budget slippage, which would be applied by the PSD-ALDE government. News… END_OF_DOCUMENT_TOKEN_TO_BE_REPLACED

French Prosecutor Jean-Francois Bohnert will be appointed as head of the European Financial Prosecutor's Office, a position for which he was heard on Thursday, 11… END_OF_DOCUMENT_TOKEN_TO_BE_REPLACED

Romania recorded the highest road deaths in the EU also last year, with 96 deaths per one million inhabitants in 2018, almost double the EU… END_OF_DOCUMENT_TOKEN_TO_BE_REPLACED

Sorina Pintea announced on Thursday further new changes that will be brought to the functioning of the health care system, including new rules for employment… END_OF_DOCUMENT_TOKEN_TO_BE_REPLACED

The new order on approval and selection procedures for insolvency practitioners is an important step to a very good direction, industry experts say. ANAF is… END_OF_DOCUMENT_TOKEN_TO_BE_REPLACED