A cry from BNR: Romania’s potential is compromised by increase in consumption of others’ products on our debt. Exchange rate and inflation 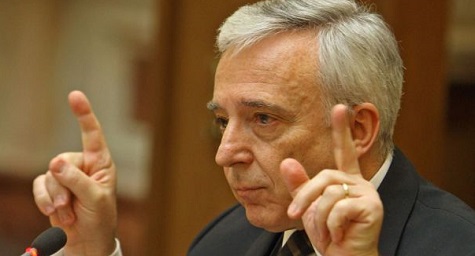 Macroeconomic balances suffer a significant deterioration because of the government pro-cyclical policy to stimulate consumption.

The pro-cyclical policy led to an increase in the trade and current account deficits and amplified the depreciation pressures of the local currency, according to the explanations of Mugur Isarescu (FOTO), Governor of the National Bank of Romania (BNR), offered on the occasion of the presentation of the Report on inflation.

„We cannot beat the economic fundamentals, and they are expressed based on the currency exchange rate„

„We have pro-cyclical policies to stimulate the surplus of the aggregate demand growth, which largely explains the trade deficit, the current account deficit and the pressures on the exchange rate. (…) We cannot beat the economic fundamentals, especially since they are expressed by the exchange rate. If you have problems with the current account deficit, you must address (them) by capital raising, by European funds that are waiting, free of charge, to enter and do not enter, with the stimulation of exports,” said Mugur Isarescu.

The BNR Governor also warned on the possible inconsistency between the fiscal and salary policies and the monetary policy, even though he avoided to comment on the recent ordinance on amending the Tax Code.

„If only we go with the foot on the brake (in terms of consumption) we do not get too far as a country. It is good not to go out of an optimal range very much,” said the BNR Governor referring to the mix of tax and monetary policies. However, the BNR leader has denied the existence of a break between these policies.

BNR revised upward the inflation forecast for the end of 2017 to 2.7% from 1.9%, mainly following the increase in the surplus of the aggregate demand, driven by a „high consumer confidence” but amid a „mixed feeling at the level of the business environment”.

The inflation rate for the end of 2018 is estimated at 3.2%, after getting close to 4% in the spring as a result of the statistical base effect of the tax cut. 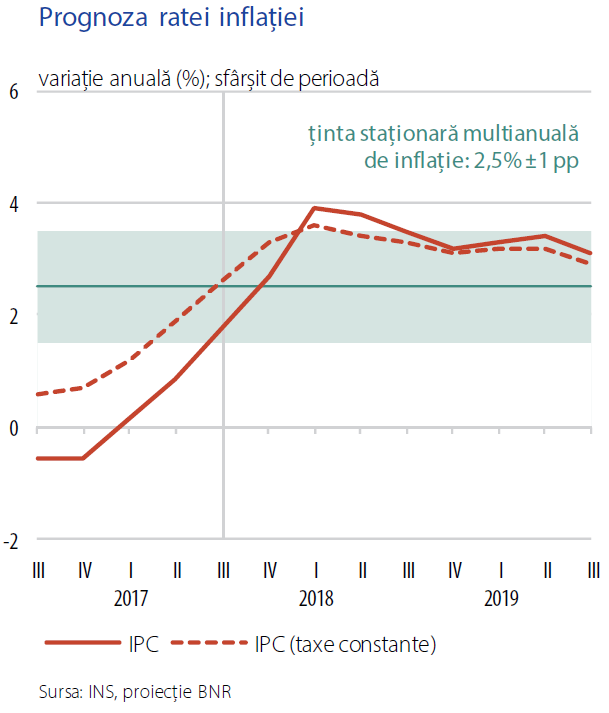 The BNR report says that the increase in inflation also reflects „increasing pressures from the domestic environment caused by the increase in the companies’ production costs”, and the BNR Governor did not hesitate to put this on the account of the „wide pressure” of the wage increases.

Trade deficit: we are out of sync with Poland and Hungary

The increase in demand by stimulating domestic consumption and the economic growth based on it are all the more worrying as satisfying the demand involves more imports, which leads to the deterioration of the trade deficit and the current account deficit.

„The robust demand of consumption and the increase in the prices of energy products continue to erode the foreign balance,” says the BNRs report. 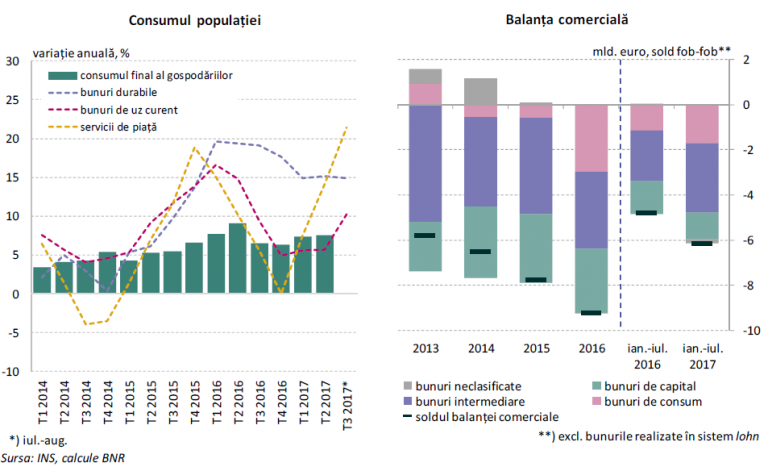 With increasing imports, „we are ambitious to create jobs abroad,” Mugur Isarescu repeated an older warning.

Instead, the gross capital formation „is down and stagnating, engineering construction (infrastructure and energy) – in a brutal fall. What seems more serious to me is that the deterioration (of the trade deficit) is increasingly occurring in consumer goods, not since recently, but since 2014, 2015, since the theory of consumption’s stimulation,” the BNR Governor also said.

INS announced that imports increased by 9.2% but exports only by 6% in September 2017 compared to the same month of last year.

Significant is the fact that Romania is out of sync with the countries with which we usually compare (Poland, Hungary) and which end their consumption stimulation cycle and move to a commercial surplus.

In this context, the BNR official pointed out that the two countries mentioned „have closed or are going to close their aggregate demand surplus”, unlike Romania, where it is growing.

And the differences are seen in the foreign exchange market.

Exchange rate: we are worse than zloty and forint

„Depreciation pressures are also on both the zloty and the forint, but Romanian leu is on a longer-lasting depreciation trend than these currencies, a situation that is definitely related to Romania’s balance of payments, where we have a deteriorating situation, unlike Poland and Hungary. It is true that exports have increased, but the base is unbalanced, imports are increasing more, and even if exports grew as much as imports, the situation would still be difficult,” according to Mugur Isarescu. 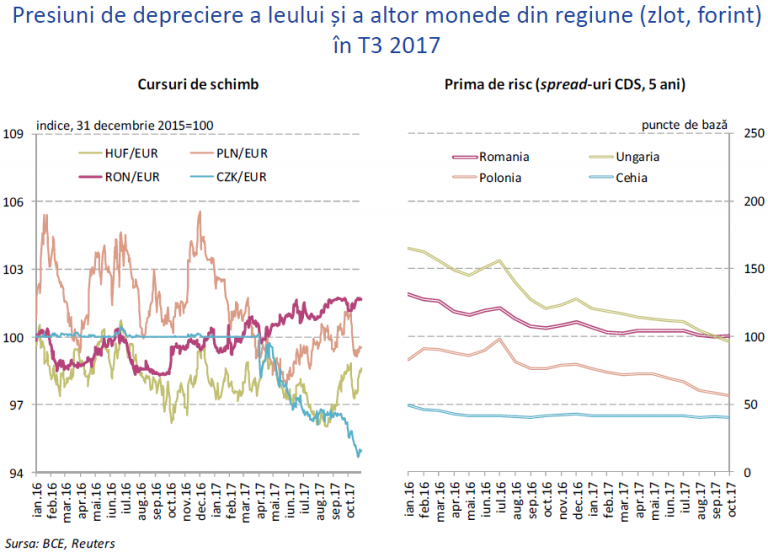 The governor of the central bank believes that at this moment the euro-leu exchange rate is „at a level of a relative balance” and objected to the comparisons with the exchange rates recorded in other periods, comparisons that should be made „in a historical context”.

„When the course reflects the fundamentals, I say it in a clear way, as I always did, we have no way of beating the fundamentals. Fundamentals must be solved. If there is an issue of an extension of your current account deficit, you need to deal with the issue, not with the exchange rate. It means that you permanently have a currency shortage on the market, that should be solved,” said Mugur Isarescu. 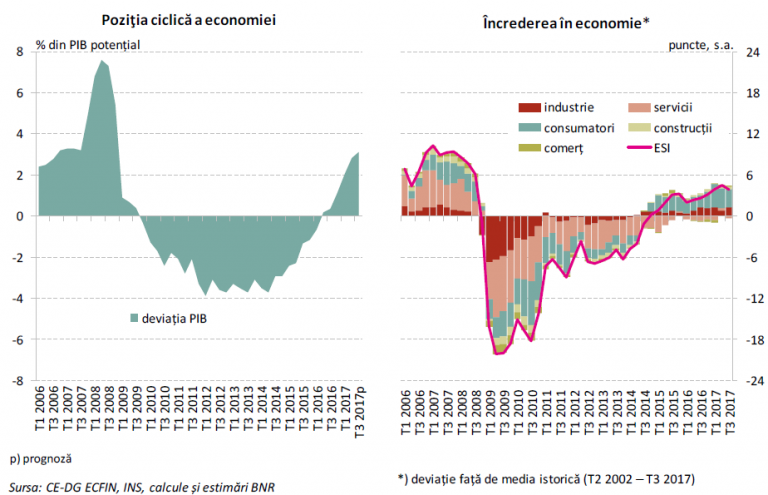 The deterioration of macroeconomic balances is also illustrated by the economic growth above potential, the output gap that reached about 4%, which is all the more worrying as „the economic growth is driven only by consumption while investment stagnate, and the positive contribution of the private sector is cancelled by the severe decline of the public component,” says the BNR report.

Besides, „if you have about four million people between 15 and 64 years of age and do not seem to be looking for work but you have a consumption-based economic growth, it means that you have a problem,” said the BNR Governor who added that these tensions and others in the labour market are to be investigated also within the central bank, although they are not part of its priorities.