Romania has improved its competitiveness compared to the Czech Republic and Bulgaria at the regional level in recent years but lost ground compared to Croatia,… END_OF_DOCUMENT_TOKEN_TO_BE_REPLACED

If delayed long after 2022, the investment in natural gas exploitation in the Romanian commercial area of ​​the Black Sea could become unprofitable. Also, not… END_OF_DOCUMENT_TOKEN_TO_BE_REPLACED

The National Institute of Statistics confirmed the signal result of the economic growth for 2020 at the level of -3.9%, in the first preliminary version… END_OF_DOCUMENT_TOKEN_TO_BE_REPLACED

World Bank’s new Country Partnership Framework with Romania: Adoption of laws and strategies is not enough 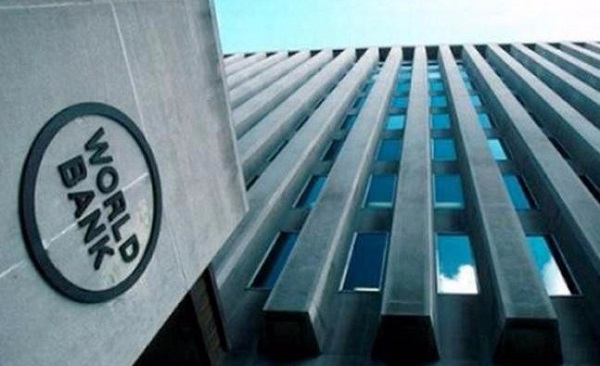 The World Bank’s Board of Directors has approved a new Country Partnership Framework (CPT) with Romania for a five-year period (2019-2023).

The strategic lever of the World Bank Group’s role in achieving “high priority institutional reforms will be the focus of the program“. This is one of the “lessons” derived from the report on the previous period (2014-2018), according to the document.

“Greater attention should be paid to supporting the implementation of institutional reforms under the new Country Partnership Framework (CPT),” the World Bank (WB) report also says.

Formal achievements, such as the adoption of new laws and strategies, “are not enough to facilitate a sustainable institutional change,” is another conclusion from the analysis of the previous period.

In order to achieve the necessary institutional reforms, the following will prove “critical”:

At the same time, IFC (International Finance Corporation, the WB direct investment division) “faced challenges in supporting the development of PPP projects and the extension of municipal funding partnerships.”

Recently, the Ministry of Transport has proposed to the Government to abandon the assistance of the World Bank in building the A3 Ploiesti-Comarnic-Brasov highway, and chose to use the PPP method for the fourth time and after another three unsuccessful attempts in the last 15 years.

“A major problem faced by the IFC is the absence of a functioning PPP law (in the meantime, approved by the Parliament but still without implementation rules) and the lack of the corresponding institutional capacity to support its implementation. In municipal finances, issues such as the governance, as well as the availability of a domestic financing at competitive prices, restrict the IFC’s footprint,” the WB also said.

The strategy included in the partnership framework is “to address the key issues affecting a sustainable and inclusive growth” and will have the following priorities:

Objectives of the partnership (CPF) according to the country diagnosis (SCD) 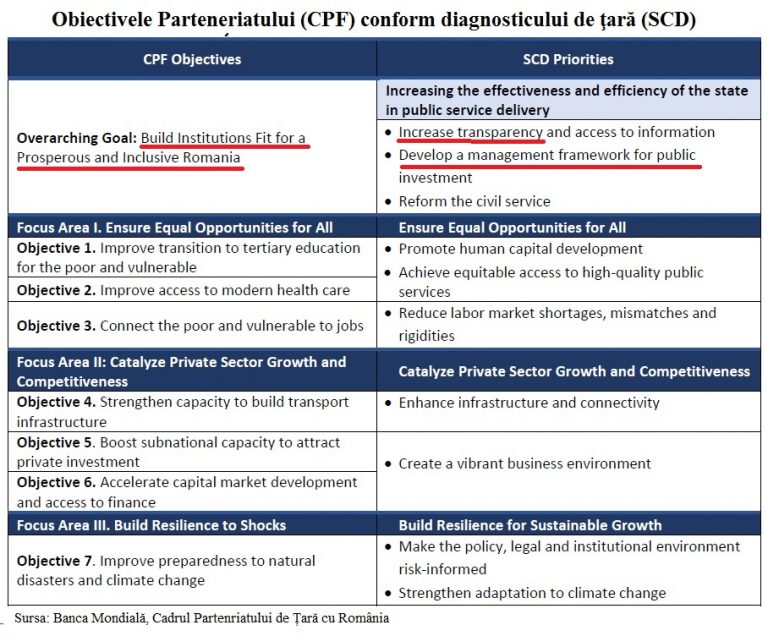 The Country Partnership Framework (CPT) with Romania will follow three main areas and focus on improving the human capital, developing the private sector and competitiveness, as well as on the resilience to shocks.

Among specific objectives, we notice:

The “systematic country diagnosis” that was the basis of the new framework of the WB partnership with Romania has identified the most critical constraints against the sustainable economic growth and the distribution of prosperity, according to the document quoted:

Since the opening of its Bucharest office in 1991, the World Bank has provided financing that amounts to over USD 13.6 billion in total (loans, guarantees and grants) in all sectors of the Romanian economy.

Since Romania’s accession to IFC, long-term funding in Romania amounted to USD 2.81 billion, including USD 606.8 million mobilized from WB partners for 93 projects in various sectors.

IFC has supported trade exchanges of over USD 900 million through its trade financing program.

Luca de Meo (foto), the new general manager (CEO) of Renault group, considers that Dacia project proved to be a miracle and that no one… END_OF_DOCUMENT_TOKEN_TO_BE_REPLACED

A former Soviet airbase in central Romania could become a hub for US Air Force operations in south-eastern Europe, where the Pentagon is seeking to… END_OF_DOCUMENT_TOKEN_TO_BE_REPLACED

Nuclearelectrica's Board of Directors has been mandated to initiate proceedings to terminate negotiations with China General Nuclear Power Group (CGN), as well as legal effects… END_OF_DOCUMENT_TOKEN_TO_BE_REPLACED

Romania imported an amount of electricity of almost 796 GWh in the first month of this year, by more than 36% above what it exported… END_OF_DOCUMENT_TOKEN_TO_BE_REPLACED

GFG Alliance has committed to invest one billion euros to upgrade Galati steel plant in order to reduce emissions and increase production. Another EUR 1… END_OF_DOCUMENT_TOKEN_TO_BE_REPLACED

The Transport Ministry, as the Intermediate Body in Transport, approved the financing request for the project "Construction of Sibiu - Pitesti highway", Sections 1, 4… END_OF_DOCUMENT_TOKEN_TO_BE_REPLACED

Lack of trust in authorities, corruption and low living standards are the main reasons why young people leave Romania. The data is part of a… END_OF_DOCUMENT_TOKEN_TO_BE_REPLACED

Romania is the EU country with the fewest cars in terms of the number of inhabitants, according to data recently published by Eurostat. We appear… END_OF_DOCUMENT_TOKEN_TO_BE_REPLACED

The Government is preparing the public for the first measures aimed at avoiding the budget slippage, which would be applied by the PSD-ALDE government. News… END_OF_DOCUMENT_TOKEN_TO_BE_REPLACED

French Prosecutor Jean-Francois Bohnert will be appointed as head of the European Financial Prosecutor's Office, a position for which he was heard on Thursday, 11… END_OF_DOCUMENT_TOKEN_TO_BE_REPLACED

Romania recorded the highest road deaths in the EU also last year, with 96 deaths per one million inhabitants in 2018, almost double the EU… END_OF_DOCUMENT_TOKEN_TO_BE_REPLACED

Sorina Pintea announced on Thursday further new changes that will be brought to the functioning of the health care system, including new rules for employment… END_OF_DOCUMENT_TOKEN_TO_BE_REPLACED

The new order on approval and selection procedures for insolvency practitioners is an important step to a very good direction, industry experts say. ANAF is… END_OF_DOCUMENT_TOKEN_TO_BE_REPLACED