Romania has improved its competitiveness compared to the Czech Republic and Bulgaria at the regional level in recent years but lost ground compared to Croatia,… END_OF_DOCUMENT_TOKEN_TO_BE_REPLACED

If delayed long after 2022, the investment in natural gas exploitation in the Romanian commercial area of ​​the Black Sea could become unprofitable. Also, not… END_OF_DOCUMENT_TOKEN_TO_BE_REPLACED

The National Institute of Statistics confirmed the signal result of the economic growth for 2020 at the level of -3.9%, in the first preliminary version… END_OF_DOCUMENT_TOKEN_TO_BE_REPLACED

World Bank – A scary report that no longer scares anyone: Latest assessment of Romanian emigration 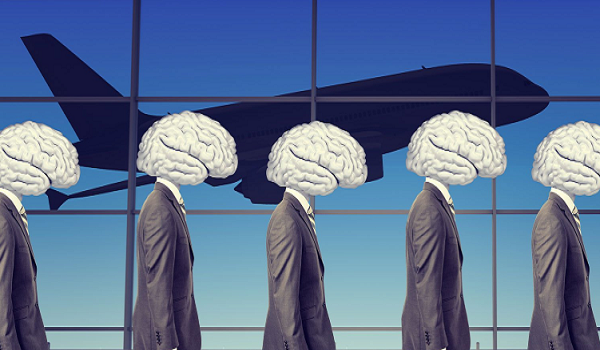 Between three and five million Romanians work and live abroad.

The 2017 UN estimate, rated as optimistic by the World Bank’s Report on Diagnosis of Systemic Issues Caused by Migration, indicates 3.58 million people, or 18.2% of the Romanian population. It means that migration has a contribution of over 75% to the demographic decline registered by Romania.

The authors of the WB report are advancing a number of three million Romanians working abroad, which is equivalent to 23.3% of the Romanian working age population.

The positive effects of remittances and returning migrants are counterbalanced by the shortage caused in the Romanian labour market and an economic growth below the level possible without the huge flows of emigrants.

According to the European Commission, the highest shares of those who left appear in the highly qualified people categories (26.6%).

The situation has led to personnel deficits in several fields with a high added value – there is a high demand of IT programmers, physicians, electrical engineers, technicians, etc. on the domestic labour market.

An IMF study in 2016 showed that the emigration of the skilled labour force has slowed down Romania’s economic development: the annual GDP growth in real terms would have been about 10 percentage points higher in the absence of emigration.

Even with regard to remittances, the effects are ambivalent: 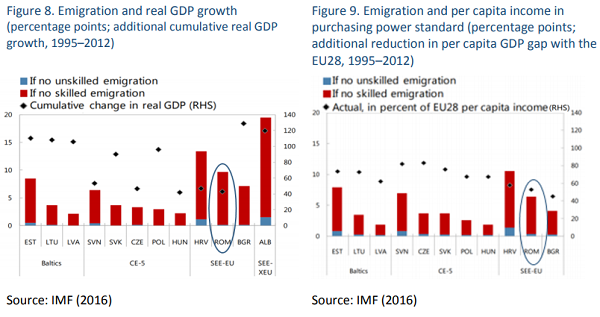 Categories whose migration should particularly concern the governors

The study also analyses two categories of highly skilled people with high emigration rates, which could cause great problems for Romania’s development in the medium and long-term.

One out of four doctors went abroad between 2000 – 2013, when the number of these professionals increased by 18% in the country, while the number of Romanian doctors from abroad climbed by over 650%: 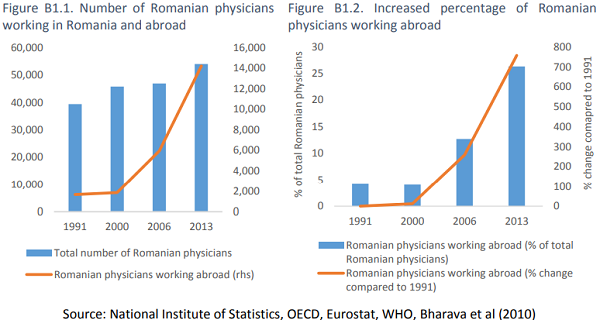 Romanians from poor, rural areas are especially affected, where the shortage of medical personnel has reached alarming levels.

More than 50% of Romanian doctors who left are under the age of 40, and most of those who have applied for a certificate for the diploma recognition (for working abroad) are resident doctors.

Also, many young doctors choose other member states to complete their training.

Young people are also attracted by the quality of programs and the possibility to improve their communication skills in a foreign language, as well as the fact that they have more career opportunities after obtaining the bachelor degree, especially abroad.

This last aspect is particularly relevant, says the WB study, given that youth unemployment was over 20%, while the overall ratio (15-64 years) was only 5.9% in 2016.

The most impressive obstacles to their return to Romania after obtaining the bachelor degree are:

The study shows that there is a lack of detailed data and analysis on emigration, therefore it is difficult to assess as accurately as possible the positive and negative effects of emigration, while all this information, based on which field policies can be developed, are crucial for Romania’s development on the long run.

Luca de Meo (foto), the new general manager (CEO) of Renault group, considers that Dacia project proved to be a miracle and that no one… END_OF_DOCUMENT_TOKEN_TO_BE_REPLACED

A former Soviet airbase in central Romania could become a hub for US Air Force operations in south-eastern Europe, where the Pentagon is seeking to… END_OF_DOCUMENT_TOKEN_TO_BE_REPLACED

Nuclearelectrica's Board of Directors has been mandated to initiate proceedings to terminate negotiations with China General Nuclear Power Group (CGN), as well as legal effects… END_OF_DOCUMENT_TOKEN_TO_BE_REPLACED

Romania imported an amount of electricity of almost 796 GWh in the first month of this year, by more than 36% above what it exported… END_OF_DOCUMENT_TOKEN_TO_BE_REPLACED

GFG Alliance has committed to invest one billion euros to upgrade Galati steel plant in order to reduce emissions and increase production. Another EUR 1… END_OF_DOCUMENT_TOKEN_TO_BE_REPLACED

The Transport Ministry, as the Intermediate Body in Transport, approved the financing request for the project "Construction of Sibiu - Pitesti highway", Sections 1, 4… END_OF_DOCUMENT_TOKEN_TO_BE_REPLACED

Lack of trust in authorities, corruption and low living standards are the main reasons why young people leave Romania. The data is part of a… END_OF_DOCUMENT_TOKEN_TO_BE_REPLACED

Romania is the EU country with the fewest cars in terms of the number of inhabitants, according to data recently published by Eurostat. We appear… END_OF_DOCUMENT_TOKEN_TO_BE_REPLACED

The Government is preparing the public for the first measures aimed at avoiding the budget slippage, which would be applied by the PSD-ALDE government. News… END_OF_DOCUMENT_TOKEN_TO_BE_REPLACED

French Prosecutor Jean-Francois Bohnert will be appointed as head of the European Financial Prosecutor's Office, a position for which he was heard on Thursday, 11… END_OF_DOCUMENT_TOKEN_TO_BE_REPLACED

Romania recorded the highest road deaths in the EU also last year, with 96 deaths per one million inhabitants in 2018, almost double the EU… END_OF_DOCUMENT_TOKEN_TO_BE_REPLACED

Sorina Pintea announced on Thursday further new changes that will be brought to the functioning of the health care system, including new rules for employment… END_OF_DOCUMENT_TOKEN_TO_BE_REPLACED

The new order on approval and selection procedures for insolvency practitioners is an important step to a very good direction, industry experts say. ANAF is… END_OF_DOCUMENT_TOKEN_TO_BE_REPLACED