Romania has improved its competitiveness compared to the Czech Republic and Bulgaria at the regional level in recent years but lost ground compared to Croatia,… END_OF_DOCUMENT_TOKEN_TO_BE_REPLACED

If delayed long after 2022, the investment in natural gas exploitation in the Romanian commercial area of ​​the Black Sea could become unprofitable. Also, not… END_OF_DOCUMENT_TOKEN_TO_BE_REPLACED

The National Institute of Statistics confirmed the signal result of the economic growth for 2020 at the level of -3.9%, in the first preliminary version… END_OF_DOCUMENT_TOKEN_TO_BE_REPLACED

Why Romania fails to join OECD: criteria that it does not meet and what to do 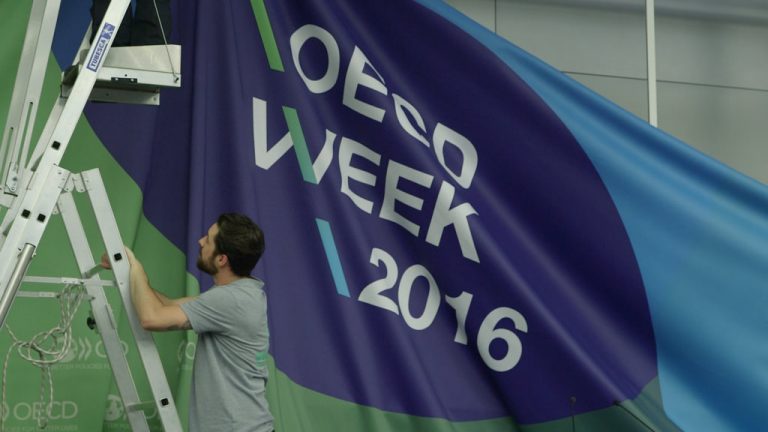 Romania’s accession to the OECD is a major goal of the Romanian foreign policy since 2004.

After 7 governments at Victoria Palace and 13 years since establishing this objective, during which the OECD has received new members 2 times (2004 and 2012), Romania is still waiting for a favourable decision.

According to an OECD report issued in December 2016, the wait seems to be lasting and does not dependent primarily on the consensus of the organization members, but Romania itself, which has significant shortcomings in meeting the accession criteria.

Monitored areas: what does not work

Once a country announces its intention to join the organization, OECD initiates a monitoring process of the candidate to decide whether comply with a set of common rules.

The latest OECD report, issued in December 2016, indicates that the organisation monitors the following five areas:

Below, the problems identified by the OECD on each of the five fields:

According to the OECD definition, the Centre of government (CoG) is the body that provides direct support and advice to the Romanian prime minister and the Government overall. From a traditional administrative position, the CoG plays in many OECD member countries an active role in the development and coordination of the public policy, including strategic planning and supervision, cross-departmental coordination.

In Romania, CoG is based on two institutional pillars:

Below, a comparison in terms of organization, duties, and resources of CoG between Romania and OECD countries: 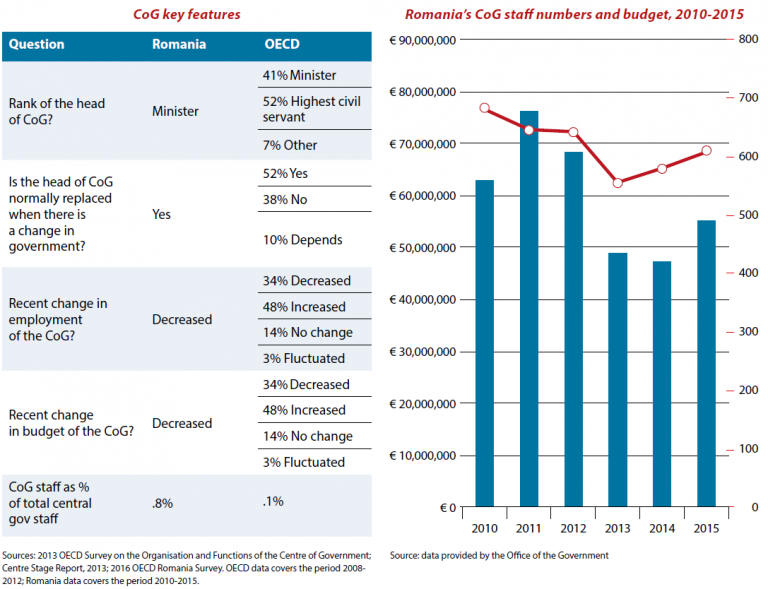 Clarifying the CoG’s mandate and strengthening its capacity in areas such as strategic planning and these efforts are often conceived or funded by external partners, not Romania, shows the OECD report.

In detail, it states:

OECD recommendations for Romania’s CoG are:

The budget is a central policy document of government, showing how it will prioritise and resource the achievement of its annual and multi-annual objectives. Budgetary governance refers to the processes, laws, structures and institutions in place for ensuring that the budgeting system meets its objectives in an effective, sustainable and enduring manner.

According to the OECD, the governments must ensure that budget data and documents are open, transparent and accessible. The graph below shows which data are available in the OECD countries and Romania.

According to the OECD, despite substantial efforts, specific challenges limit the budgetary governance in Romania. These challenges include:

The OECD recommendations are:

Strategic Human Resources Management (HRM) looks at the processes and tools used to ensure that the capacities of the government workforce are aligned to the mission and core strategic objectives of the government. This means ensuring that the right people are working in the right places to effectively and efficiently achieve goals and objectives.

According to the OECD data, the central government in Romania employs 125,446 people (68,033 civil servants, 50,083 contract staff, and 7,330 public dignity positions). Civil servants have a high job security, are on different pay scales and undergo a rigorous recruitment process.

The National Agency of Civil Service (NACS) acts as central HR authority. In Romania, the hiring responsibility is split between NACS and ministries to an extent exceeding the average of the OECD member states, which generates suspicions about the clarity of the NACS’s role in the hiring process.

In Romania, the OECD notes, standardised and centralised administrative data for central public workforce are lacking. Romania collects much less data than almost all OECD countries, as the chart below shows 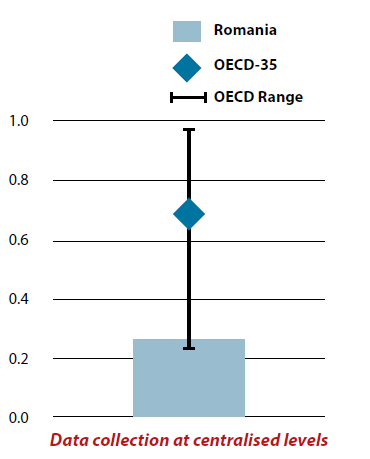 The management of recruitment of senior civil servants is a growing priority among most OECD countries and Romania’s human resources practices for this category is weaker than the OECD average, as the chart below shows. 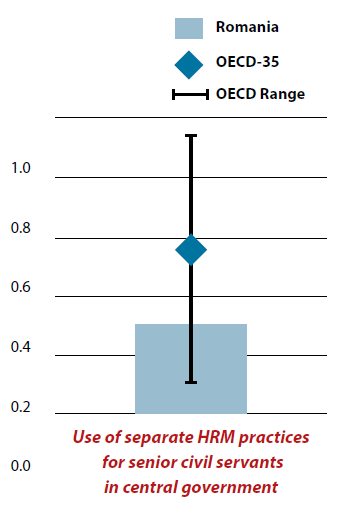 OECD lists the following challenges that block the implementation of a proper human resources strategy:

For an irreversible process of strategic human resource reform, OECD invites the Government to consider the following:

4 – Open government – Abuse of emergency ordinances, too many disconnected strategies

The open Government refers to a culture of governance that fosters democracy and inclusive growth, based on innovative and sustainable policies and practices inspired by the principles of transparency, accountability, and participation.

Below is a table of tools used in the open government. 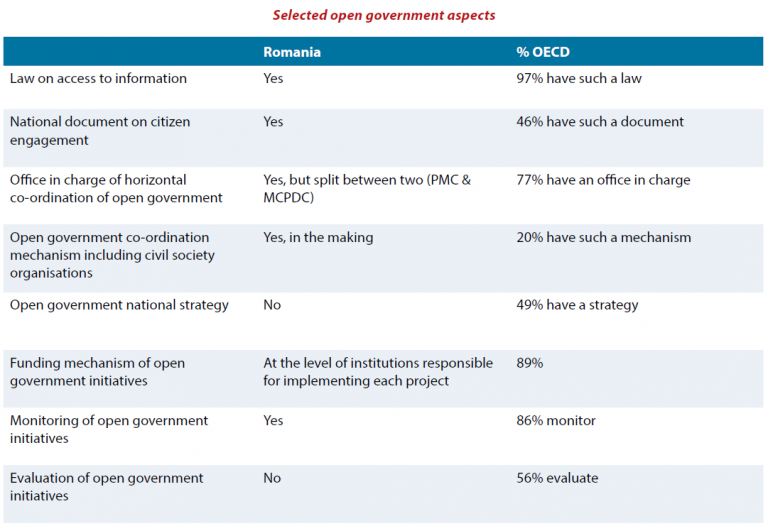 According to the OECD report, Romania has to face the following challenges in this area:

Additionally, the OECD noted the multitude of national strategies which are not connected and, in some cases, are contradictory.

Consequently, the OECD advises the Romanian Government to place open government on its top priority list and recommends:

Digital government refers to the use of digital technologies as an integrated part of governance. It relies on the government actors, non-governmental organisations, business environment, citizens to support the creation of – and access to – data, services and digital content.

Below, a graph illustrating Romania’s position on the map of digital governance. 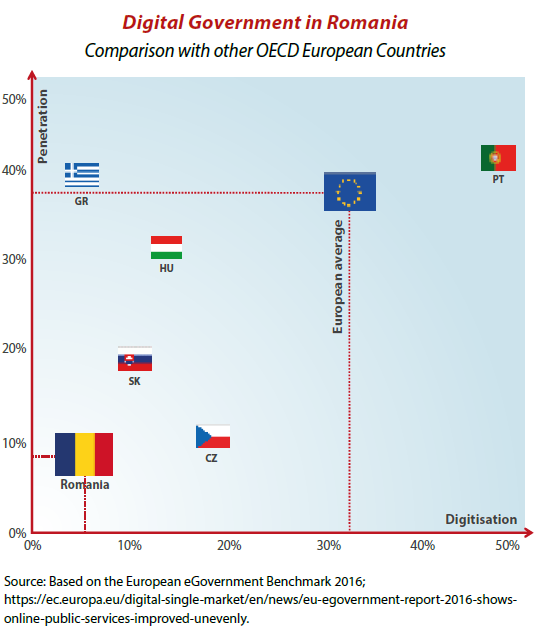 Romania is currently trying to modernize its administration by implementing the National Strategy on Digital Agenda. The challenges of this approach, according to the OECD:

The idea of joining the Organisation for Economic Co-operation and Development appeared during the Nastase government. The initiative becomes in 2004 a strategic objective of the Romanian foreign policy, but the Ministry of Foreign Affairs takes no significant steps in this regard.

The objective is maintained during Tariceanu, Boc and Ungureanu governments and later, during Ponta government, is even included in the PSD government program for 2013-2016.

After missing the target in 2012, when the OECD accepted new members, Romania reiterated its intention to join the organization by the letter of the Romanian Prime Minister Victor-Viorel Ponta to the OECD Secretary-General, Angel Gurria.

In June 2016, Prime Minister Ciolos goes to the OECD headquarters, where agrees with the Secretary-General on a co-operation program for receiving an invitation to join on the occasion of the next round of enlargement.

On 1 September 2016, the Government established the Inter-ministerial committee on development of cooperation with the OECD.

OECD: institution and benefits of membership

The OECD is an intergovernmental forum with the mission to identify, disseminate and evaluate the implementation of appropriate public policies to ensure sustainable economic growth and social stability.

The 35 members of the OECD (most of them Europeans – 23) are developed countries, representing over 70% of global production and trade and 90% of the global FDI.

Luca de Meo (foto), the new general manager (CEO) of Renault group, considers that Dacia project proved to be a miracle and that no one… END_OF_DOCUMENT_TOKEN_TO_BE_REPLACED

A former Soviet airbase in central Romania could become a hub for US Air Force operations in south-eastern Europe, where the Pentagon is seeking to… END_OF_DOCUMENT_TOKEN_TO_BE_REPLACED

Nuclearelectrica's Board of Directors has been mandated to initiate proceedings to terminate negotiations with China General Nuclear Power Group (CGN), as well as legal effects… END_OF_DOCUMENT_TOKEN_TO_BE_REPLACED

Romania imported an amount of electricity of almost 796 GWh in the first month of this year, by more than 36% above what it exported… END_OF_DOCUMENT_TOKEN_TO_BE_REPLACED

GFG Alliance has committed to invest one billion euros to upgrade Galati steel plant in order to reduce emissions and increase production. Another EUR 1… END_OF_DOCUMENT_TOKEN_TO_BE_REPLACED

The Transport Ministry, as the Intermediate Body in Transport, approved the financing request for the project "Construction of Sibiu - Pitesti highway", Sections 1, 4… END_OF_DOCUMENT_TOKEN_TO_BE_REPLACED

Lack of trust in authorities, corruption and low living standards are the main reasons why young people leave Romania. The data is part of a… END_OF_DOCUMENT_TOKEN_TO_BE_REPLACED

Romania is the EU country with the fewest cars in terms of the number of inhabitants, according to data recently published by Eurostat. We appear… END_OF_DOCUMENT_TOKEN_TO_BE_REPLACED

The Government is preparing the public for the first measures aimed at avoiding the budget slippage, which would be applied by the PSD-ALDE government. News… END_OF_DOCUMENT_TOKEN_TO_BE_REPLACED

French Prosecutor Jean-Francois Bohnert will be appointed as head of the European Financial Prosecutor's Office, a position for which he was heard on Thursday, 11… END_OF_DOCUMENT_TOKEN_TO_BE_REPLACED

Romania recorded the highest road deaths in the EU also last year, with 96 deaths per one million inhabitants in 2018, almost double the EU… END_OF_DOCUMENT_TOKEN_TO_BE_REPLACED

Sorina Pintea announced on Thursday further new changes that will be brought to the functioning of the health care system, including new rules for employment… END_OF_DOCUMENT_TOKEN_TO_BE_REPLACED

The new order on approval and selection procedures for insolvency practitioners is an important step to a very good direction, industry experts say. ANAF is… END_OF_DOCUMENT_TOKEN_TO_BE_REPLACED