Romania fell 3 places to the 10th position in the ranking of largest investments made by the European Bank for Reconstruction and Development (EBRD), after… END_OF_DOCUMENT_TOKEN_TO_BE_REPLACED

The Transport Ministry, as the Intermediate Body in Transport, approved the financing request for the project “Construction of Sibiu – Pitesti highway”, Sections 1, 4… END_OF_DOCUMENT_TOKEN_TO_BE_REPLACED

Lack of trust in authorities, corruption and low living standards are the main reasons why young people leave Romania. The data is part of a… END_OF_DOCUMENT_TOKEN_TO_BE_REPLACED

Romania imported 38% more electricity in the first five months of this year, compared to the same period of 2018, according to the most recent… END_OF_DOCUMENT_TOKEN_TO_BE_REPLACED

“Whole Romania is taking an intensive course in Law, taught by people who have interests in solving their own cases and have never graduated Law” 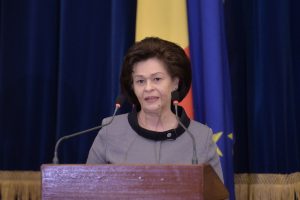 The President of the Supreme Court, Cristina Tarcea, said on Wednesday at the presentation of DNA’s activity report that she would like the recent attacks to not intimidate those who work for serving the justice.

In her speech, the HCCJ President said: “People who have interests in solving their own cases and have never graduated Law teach Romania an intensive course of Law” and claim that justice should be done according to their own indications. Equally, though, the judiciary needs to get rid of controversial people, Cristina Tarcea said.

Speech of the HCCJ President in the following:

“You know how much lie and manipulation is in public space. It is time to notice, objectively and impartially, the causes within our system, those causes that are likely to generate suspicions and distrust and remove them.

You have noticed – and I am referring to the judiciary overall, not just to prosecutors, the same applies to judges: we cannot pretend that we do not see that the seed of mistrust has been planted and is starting to bear fruit.

I would like the endless attacks in the last period to not intimidate those who work to serve the justice.

I cannot refrain from saying that I participate at the fifth presentation of the DNA’s activity review and I do not know whether I am wrong, but it seems that in other years the presidium table was longer and more inclusive. It is about the times or the weather, I cannot figure it out.

Also because of the times and weather, I confess that this is the first time I asked myself whether the HCCJ President should be present at the presentation of the DNA’s activity report (…)

We live a moment when Romania is taking an intensive course of Law, taught by people who have interests in solving their own cases and have never graduated Law. And, above all, we live in a present where they try to inoculate the idea that justice should be done according to the indications drawn from this intensive course of Law.

To all learners, I want to remind them that Law is primarily moral. People and entities having a controversial relationship with morality should not comment on how justice is done. Likewise, controversial people from the system should not be in the judiciary.

The last period, especially the last year, proved how much damage the immoral or illegal behaviours of those from the system can cause…”, Cristina Tarcea said.

The Transport Ministry, as the Intermediate Body in Transport, approved the financing request for the project "Construction of Sibiu - Pitesti highway", Sections 1, 4… END_OF_DOCUMENT_TOKEN_TO_BE_REPLACED

Lack of trust in authorities, corruption and low living standards are the main reasons why young people leave Romania. The data is part of a… END_OF_DOCUMENT_TOKEN_TO_BE_REPLACED

Romania is the EU country with the fewest cars in terms of the number of inhabitants, according to data recently published by Eurostat. We appear… END_OF_DOCUMENT_TOKEN_TO_BE_REPLACED

The Government is preparing the public for the first measures aimed at avoiding the budget slippage, which would be applied by the PSD-ALDE government. News… END_OF_DOCUMENT_TOKEN_TO_BE_REPLACED

French Prosecutor Jean-Francois Bohnert will be appointed as head of the European Financial Prosecutor's Office, a position for which he was heard on Thursday, 11… END_OF_DOCUMENT_TOKEN_TO_BE_REPLACED

Romania recorded the highest road deaths in the EU also last year, with 96 deaths per one million inhabitants in 2018, almost double the EU… END_OF_DOCUMENT_TOKEN_TO_BE_REPLACED

Sorina Pintea announced on Thursday further new changes that will be brought to the functioning of the health care system, including new rules for employment… END_OF_DOCUMENT_TOKEN_TO_BE_REPLACED

The new order on approval and selection procedures for insolvency practitioners is an important step to a very good direction, industry experts say. ANAF is… END_OF_DOCUMENT_TOKEN_TO_BE_REPLACED

Romania lost to Estonia in the final vote to get the non-permanent member position within the UN Security Council for the period 2020-2021. On Friday,… END_OF_DOCUMENT_TOKEN_TO_BE_REPLACED

eMAG hopes to get the opinion of the Hungarian Competition Council over the next two months for the acquisition of Extreme Digital, the market leader… END_OF_DOCUMENT_TOKEN_TO_BE_REPLACED