Step by step, Bulgaria hands over red flashlight to Romania 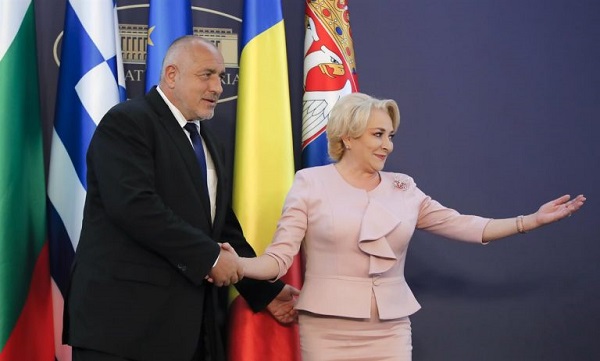 Bulgaria’s economy is smaller and somewhat less performing, but it seems to be a bit livelier. In terms of GDP/capita level, to paraphrase a popular saying, it does not matter the size only, it also matters what you can do with it. This is how we reached the bottom of the list in Europe in many areas, although the economic results would have given us the right to obtain more if we have had a better management.

Specifically, in terms of GDP per capita adjusted to the purchasing power parity (with local price levels as compared to the European average), Romania sped up compared to its colleague in the accession wave of 1 January 2007 and has reached a score in its favour by far: 63% of the EU average, for us to only 49% of the EU average, for them, and 68% of the actual EU consumption for us to 55% for them, an indicator based on goods and services purchased and paid by a household.

So, we would have had every reason not to find ourselves in the last position in the European Union in several fields, but the situation looks like this:

After having stabilized the economic parameters by a small margin within the requirements imposed by the five Maastricht criteria (which we also met at some point but started to lose), Bulgaria has already formally submitted its related application and is making every effort to be accepted as the 20th member of the Eurozone by mid-2021 or 2022.

We would like the same thing around 2024 but no longer meet inflation requirements (1.5% above the highest average EU average) and long-term interest rates (maximum 2% above the average of the smallest values recorded in the EU member states on ten-year government bonds and assimilated ones) and the budget deficit requirement of maximum 3% is hanging by a thread, despite the robust economic growth.

Started from the same level of spending on research and development in GDP in 2006, before the EU accession (a percentage that placed them on equal positions at the bottom within the EU), Romania clearly lost grounds in the competition with Bulgaria. According to Eurostat, we have decreased steadily over the last 10 years (the only European country that has fallen!) down to 0.48% of GDP and Bulgarians advanced by 0.78% of GDP.

Bulgarians handed over to us the „honour” of being the „red flashlight” within the EU in terms of share in GDP by the expenditure in both the pre-school and primary education, as we have less than 0.5% in both cases, while they have around 1% in both cases and went up to the 7th position from the bottom of the EU list, where we maintained the last position. Let’s see two more indicators:

By expenditure for tertiary studies, although they left us very little behind with the similar percentage of 0.7% of GDP (here we are not the last one, but Luxembourg with 0.5% of a totally different GDP), Bulgarians managed to left us behind in terms of results, that is, the percentage of those with higher education aged between 30 and 34.

Noteworthy, by the proportion of adults aged between 25 and 64 enrolled in a learning program, after we and our neighbours from the south of the Danube were on equal positions, with 1.6% in 2011, our paths split. They advanced to 2.2%, we regressed and secured the last position within the EU with 1.2% in 2016 (2017 preliminary data indicate 1.1% at an EU average of 10.9%).

As an element of diversity, which would be funny if was not about ourselves, Eurostat had to interrupt the chart showing the ratio between students and teachers available for post-secondary education (we wonder why we do not find craftsmen?), because the ratio of 70 to 1 in our case came totally out of the EU practice.

Bulgarians were exactly in the opposite situation, as they were the very first in Europe with a ratio of 5 to 1: 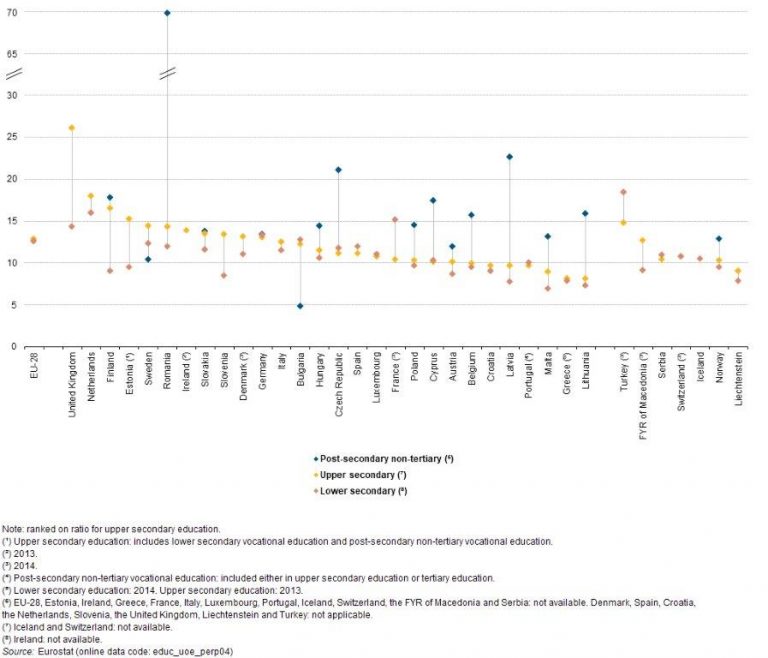 The indicator shows a discrepancy to our disadvantage, the result of a minimal investment in the equipment and medicines that allow proper diagnosis and treatment for patients. Even if we started an ambitious endowment program, we would need many years to catch up with … Bulgaria.

Beyond the insufficient endowment with essential diagnostic tools, given the precarious state of the family medicine and the preventive medicine for the main conditions, it is no wonder to find a significant difference in terms of healthy life expectancy (for those over 65 years of age):

The examples could continue, but the ones presented are sufficient to show the difference in the state’s involvement in areas from its responsibility in a market economy that intends to converge with the West.

For now, before we get there, beyond the much-discussed GDP/per capita, which is hardly seen in education, health or research, we must first converge with Bulgaria.