Sharp polarization of the economy: Half of Romanian companies fight over 2% of total revenues 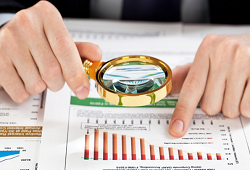 Business environment’s polarization seems to be one of the main problems of the Romanian economy.

Iancu Guda, general manager of COFACE and chairman of the Association of Financial and Banking Analysts from Romania, has analysed this phenomenon at the annual conference of the association, on Tuesday, and concluded:

„The business environment is affected by a strong polarization phenomenon, given that the largest 1,000 companies in Romania generated at the end of 2015, almost 49% of the value added in the economy, compared to only 35% in 2008. In this context, the rich are becoming richer and the poor are getting even poorer.”

1% of companies obtain 67% of the reported revenues

The aggregate data of COFACE confirm these statements. According to the official statistics, there were 589,920 companies registered in 2015 in Romania. In the same year:

Below, a chart with the comparison with other countries from Central and Eastern Europe.

By country of origin, the Romanian companies represent 36% of the top 1,000 companies, the remaining 64% being foreign companies.

Most of them are from:

The graph below shows the distribution of these 1,000 companies by their field of activity. Note that the two most crowded fields represent the wholesale and retail trade. 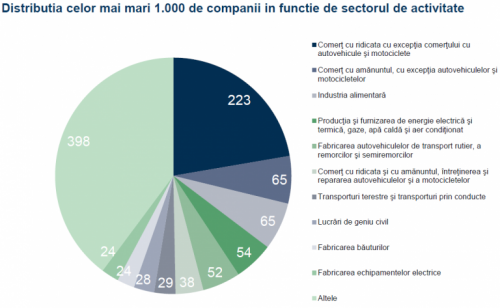 Other challenges for economy

Besides polarization, Romanian economy is also facing the capping of foreign direct investment (not exceeding 2% of GDP for 7 years now) and changes of the requirements on the labour market, says Iancu Guda.

Going back to polarization, Iancu Guda stressed that the phenomenon is replicated by the age structure of the population.

The alarming figure is the following: the group of age over 70 has a dynamic increase of 53% when compare figures from 2011 (latest statistics available) to 1990.