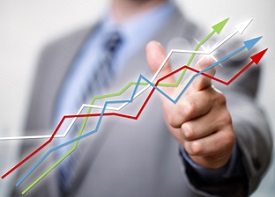 In absolute figures, the GDP was recalculated with a slight increase from the data presented in the initial provisional version (+2,392.9 million or 0.64% in nominal terms), not enough to change the increase percentages previously announced. Below, we present the comparative situation for the last two years of the Romanian economy based on the latest official calculations: 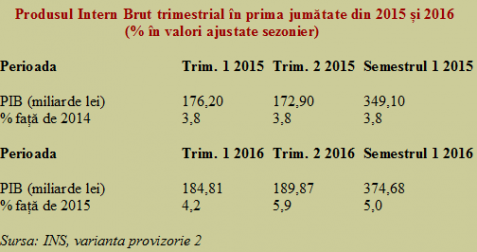 The recalculation led to a smaller increase than initially expected for the final consumption expenditure of households (from + 7.3% to + 7.0%), due to the downward revision of its volume from + 11.2% to + 10.8%. Instead, a positive adjustment has been applied to the final consumption expenditure of public administration, from + 0.3% to + 0.5%, due to the its volume increase from + 2.0% to + 3.7%.

Moreover, the impact of household domestic demand on the economic growth has been softened to 6.8% from 7.5%, as in the first provisional version. Instead, the public administration took over most of the difference and its influence on GDP growth went up from + 0.1% to + 0.7%.

Overall, the negative effect of foreign trade on GDP growth decreased from -3.4%, the initial estimation, to -2.2%, which is the most important change along with the increased statistical influence of the stocks variation from 0.8% to 1.9%. In other words, Romanians have consumed more from what they previously produced and already had in stock and less as impact on the negative net balance of foreign trade.

If the trade share in the economic growth was expected to be much higher than the industrial activity, it is somewhat surprising to find IT-telecom sector ranking the second. Basically, if consider its share in GDP, this was the most dynamic sector and had a decisive influence on the final result.

Agriculture has also performed well above its extremely low share in GDP in the first half of the year. With one tenth of the industry share in the final result, agriculture has contributed more than a half of industry’s contribution and equaled the statistical effect of the wage increases in the public sector (technically, they are treated as an increase in gross added value). 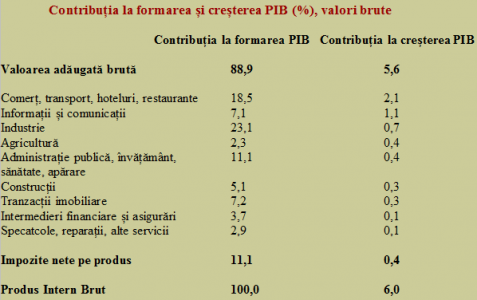 Construction sector and the related, namely the real estate, also contributed to the good result of the GDP growth. The same can barely be said about the financial intermediation and insurance sector, still facing some problems but maintained within the positive influence range on GDP growth.

It is noteworthy that although gross GDP growth in the first half of 2016 was maintained at 6%, the share of gross added value decreased as compared to the first estimates by half a percent, while net taxes added to this value for methodology reasons took over the equivalent in their account.