Romania imported an amount of electricity of almost 796 GWh in the first month of this year, by more than 36% above what it exported… END_OF_DOCUMENT_TOKEN_TO_BE_REPLACED

GFG Alliance has committed to invest one billion euros to upgrade Galati steel plant in order to reduce emissions and increase production. Another EUR 1… END_OF_DOCUMENT_TOKEN_TO_BE_REPLACED

The transition to a green economy needs to be supported by new, additional European funds, distinct from Romania’s allocations from the future EU multiannual budget.… END_OF_DOCUMENT_TOKEN_TO_BE_REPLACED

Romania fell 3 places to the 10th position in the ranking of largest investments made by the European Bank for Reconstruction and Development (EBRD), after… END_OF_DOCUMENT_TOKEN_TO_BE_REPLACED

“Romania’s presidency seems to fail before it starts”: Gunther Krichbaum – reaction to anti-German violent statements made by government officials 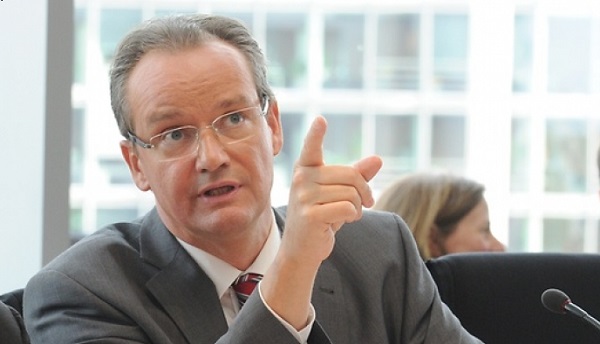 Romania’s presidency of the Council of the European Union seems to fail even before it starts, warns Chairman of the Bundestag European Affairs Committee Gunther Krichbaum (photo) in an interview with Hotnews.

The Berlin official refers to recent slippages of Darius Valcov and Liviu Pop, which he says affects German-Romanian relations, especially since no delimitation existed from the Government, which shows that they are accepted and assumed by the majority coalition.

What it is about:

Liviu Pop compares the United States, Germany, Austria, and the Netherlands with some cockroaches, in an image posted on Facebook related to the alleged strategic interests of these countries regarding the exploitation of the natural gas in Romania: 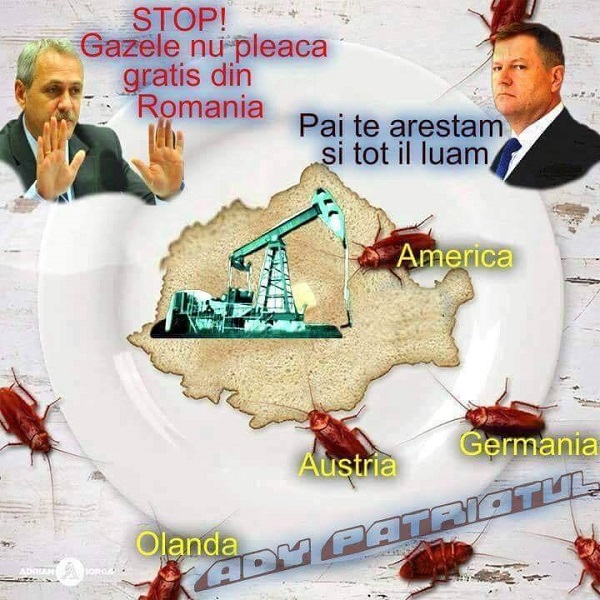 Liviu Pop also posted messages on Facebook according to which The Forum of Germans in Romania is a Nazi-based organization and its former leader, Klaus Iohannis, is, as a consequence, a Nazi.

Darius Valcov, the right hand of Prime Minister Dancila, compared President Klaus Iohannis with Hitler in a graphic illustration, followed by a text in which the Democratic Forum of Germans in Romania was labelled as a fascist organization that has Svastica as the logo.

Several publications in Germany and France have written about this political attack that uses symbols whose promotion is banned by law, including in Romania and offends German people: 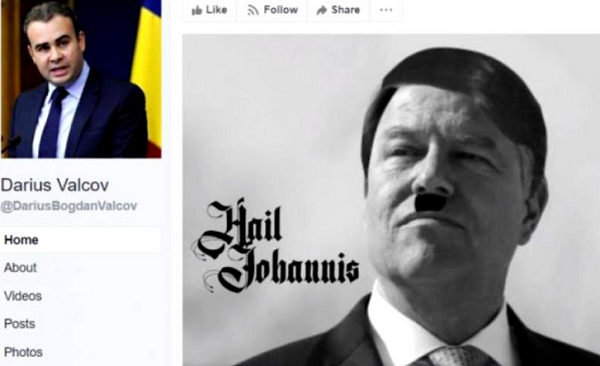 Olguta Vasilescu, a minister in the Romanian Government, said after the repression of protest on August 10, referring to President Iohannis’s criticism, that “you should have courage, as a German, to talk about gassing.”

The parliamentary group of national minorities has asked Premier Viorica Dancila, with a letter, to dismiss the advisor Darius Valcov following the post in which he associates the emblems of the Democratic Forum of Germans with the swastika.

“The parliamentary group of national minorities has taken note with concern about the appearance in the public space of a presentation of the Democratic Forum of Germans in Romania having the electoral sign and the logo (heart) replaced with the swastika,” the letter states.

Romanian-German Chamber of Commerce: We want to believe that the message does not represent the official position of the Romanian Government

The Romanian-German Chamber of Commerce (AHK Romania) will take a stand against the slippage of some officials in recent weeks regarding the approach to the German community, announced on Tuesday evening Dragos Anastasiu, President of AHK Romania.

“We are somewhat in a paradox, one year ago we also were, but now there is more: in an economic situation, even very good for the German community in Romania, on all pillars of activity that our members have, and the entire community in Romania, we are well but, on the other hand, we are worried because there are some issues that are important to Romania and which we see as hindrances,” said Anastasiu at the monthly meeting of AHK Romania members. Dragos Anastasiu is the Chairman of Eurolines group, which has activities in transport and tourism.

In addition to the fact that “the sentiment of the German community in Romania is not a positive one”, the President of AHK Romania listed, among the obstacles, the lack of labour force, lack of digitization and lack of decrease in bureaucracy, Romania’s image, infrastructure, health and education, first of all.

German Forum will notify the judiciary

The Democratic Forum of Germans in Romania (FDGR) has issued a press release stating that it firmly rejects the Facebook post of Darius Valcov, the advisor of Prime Minister Viorica Vasilica Dancila, which suggests that the FDGR would be a Nazi organization:

“The FDGR reiterates that it is the legitimate representative of the German minority established on the basis of the Romanian Constitution and the legislation in force, having a statute approved by Romanian courts (…)

Considering the repeated attacks of PSD members, since 2014, the FDGR has the right to refer not only to the courts and institutions in Romania (as it did so far), but also to those of the RFG under the Treaty between Romania and RFG signed on April 21, 1992, which stipulates the shared responsibility for protecting the rights and preserving the identity of the German minority in Romania.”

Romania imported an amount of electricity of almost 796 GWh in the first month of this year, by more than 36% above what it exported… END_OF_DOCUMENT_TOKEN_TO_BE_REPLACED

GFG Alliance has committed to invest one billion euros to upgrade Galati steel plant in order to reduce emissions and increase production. Another EUR 1… END_OF_DOCUMENT_TOKEN_TO_BE_REPLACED

The Transport Ministry, as the Intermediate Body in Transport, approved the financing request for the project "Construction of Sibiu - Pitesti highway", Sections 1, 4… END_OF_DOCUMENT_TOKEN_TO_BE_REPLACED

Lack of trust in authorities, corruption and low living standards are the main reasons why young people leave Romania. The data is part of a… END_OF_DOCUMENT_TOKEN_TO_BE_REPLACED

Romania is the EU country with the fewest cars in terms of the number of inhabitants, according to data recently published by Eurostat. We appear… END_OF_DOCUMENT_TOKEN_TO_BE_REPLACED

The Government is preparing the public for the first measures aimed at avoiding the budget slippage, which would be applied by the PSD-ALDE government. News… END_OF_DOCUMENT_TOKEN_TO_BE_REPLACED

French Prosecutor Jean-Francois Bohnert will be appointed as head of the European Financial Prosecutor's Office, a position for which he was heard on Thursday, 11… END_OF_DOCUMENT_TOKEN_TO_BE_REPLACED

Romania recorded the highest road deaths in the EU also last year, with 96 deaths per one million inhabitants in 2018, almost double the EU… END_OF_DOCUMENT_TOKEN_TO_BE_REPLACED

Sorina Pintea announced on Thursday further new changes that will be brought to the functioning of the health care system, including new rules for employment… END_OF_DOCUMENT_TOKEN_TO_BE_REPLACED

The new order on approval and selection procedures for insolvency practitioners is an important step to a very good direction, industry experts say. ANAF is… END_OF_DOCUMENT_TOKEN_TO_BE_REPLACED

Romania lost to Estonia in the final vote to get the non-permanent member position within the UN Security Council for the period 2020-2021. On Friday,… END_OF_DOCUMENT_TOKEN_TO_BE_REPLACED

eMAG hopes to get the opinion of the Hungarian Competition Council over the next two months for the acquisition of Extreme Digital, the market leader… END_OF_DOCUMENT_TOKEN_TO_BE_REPLACED