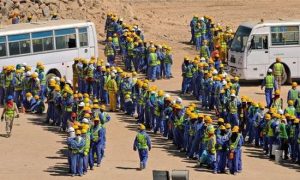 Romania entered the world’s top 20 countries that are source of migrants, with over 3.4 million citizens living in another country, according to UN estimates of migration in 2015.

At European level, Romania went up on the 4th positions for the first time, after: 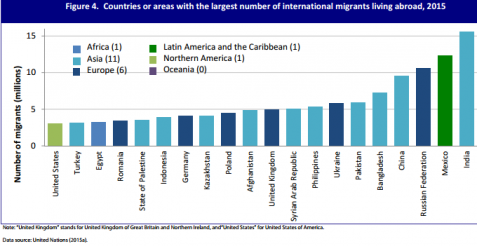 According to the recent UN Report, Romania had the second highest increase of the diaspora between 2000 – 2015: Syria ranks the first (with an average annual growth of 13.1% in the number of citizens living abroad), followed by Romania (with an annual increase of 7.3%), Poland (5.1%) and India (4.5%).

Romania therefore registered the fastest growing number of immigrants from a state that did not face war, armed conflict, etc. (on Syria, mentions the UN analysis, the community from abroad has been significantly expanding since 2011, when the war broke up).

If we consider the country’s population, the situation changes, as proportion of 4.4 million citizens to the total Poland’s population of 38.5 million equals 11%, while 3.4 million to Romania’s population living in the country (January 1, 2016) means over 17% representing the Romanian diaspora. 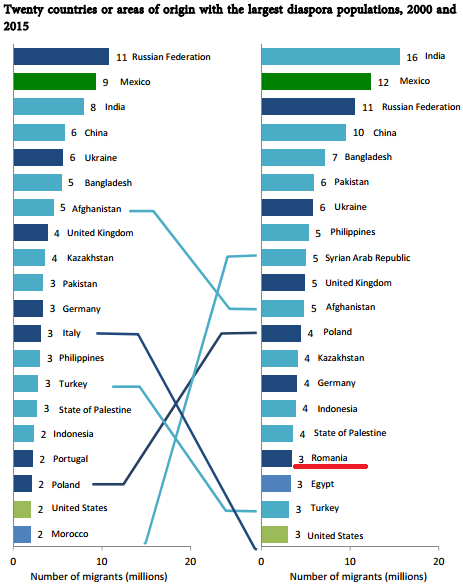 Almost two thirds of them (76 million) live in Europe.

Asia was the second destination region for 75 million of emigrants in 2015.

About two thirds (67%) of all emigrants were living in 20 countries last year. The US had the most immigrants (19%), followed by Germany and the Russian Federation (12 million immigrants, each) and Saudi Arabia (10 million immigrants).

Nearly half of the world’s immigrants were born in Asia (104 million out of 244 million emigrants). Europe is the second source region of emigrants, but in this case it comes to the mobility within the EU.

Although the international migration contribute to the population growth of the destination countries, says the report, this phenomenon cannot change the aging population trend.