Romania fell 3 places to the 10th position in the ranking of largest investments made by the European Bank for Reconstruction and Development (EBRD), after… END_OF_DOCUMENT_TOKEN_TO_BE_REPLACED

The Transport Ministry, as the Intermediate Body in Transport, approved the financing request for the project “Construction of Sibiu – Pitesti highway”, Sections 1, 4… END_OF_DOCUMENT_TOKEN_TO_BE_REPLACED

Lack of trust in authorities, corruption and low living standards are the main reasons why young people leave Romania. The data is part of a… END_OF_DOCUMENT_TOKEN_TO_BE_REPLACED

Romania imported 38% more electricity in the first five months of this year, compared to the same period of 2018, according to the most recent… END_OF_DOCUMENT_TOKEN_TO_BE_REPLACED

Premiere: CSAT asks Finance Ministry to amend amendment – session suspended until Government comes with a draft that does not affect budgets of secret services 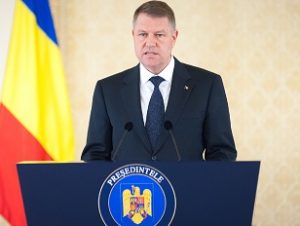 President Klaus Iohannis suspended on Tuesday the CSAT meeting for discussing the budget amendment, as there was no consensus on the budgets of institutions from the security areas.

This is a premiere in the history of the CSAT, but also in the relations between the Government and the Presidential Administration.

The President asked for a new draft from the Government, saying that the Government representatives did not explain even in the CSAT why the funds of these institutions are reduced, as they propose a “strong positive correction” as a whole.

Klaus Iohannis warned: “It is only the Government’s responsibility what will happen next. If we want to insist on political chicanery, then things might be a bit harder to solve.”

“The only topic discussed was the budget amendment. I mention: this is an obligation of the CSAT when the budgets of the defence institutions are discussed; it is not an optional question. (…) The Government did not come up with any explanation in the CSAT for these budget cuts. The heads of secret services told us the situation and explained that under these circumstances, objectives that were also set in the CSAT, also with this Government in function, cannot be achieved anymore.

Under these circumstances, there was no consensus and could not be issued the opinion needed for the budget amendment. Considering this situation, we suspended the CSAT meeting.

The budget amendment is necessary, it must be done but we must not disregard the principle of cooperation between state institutions.

We have created the possibility for the Government to come back with a new draft amendment, to cancel the cuts of funds from the national security area, which can only be explained by the political chicanery.

It is only the Government’s responsibility for what will happen next. Money is needed in many sectors. A budget amendment is necessary, but it is not acceptable to place Romania’s security in difficulty, as the amendment is a strongly positive one.

Romania is a safe country, Romanians are well defended, but these things cannot be taken for granted but because we have some efficient institutions.”

Numbers discussed – who loses, who wins

The new version of the budget amendment – different from the one published almost two weeks ago – presents consolidated general budget revenues increased compared to the previous version, from a surplus of RON 5.99 billion to RON 8.81 billion.

Instead, the MAI’s budget increases by RON 366.3 million.

Finance Minister Eugen Teodorovici said on Monday night after the new version of the amendment had been published on the MFP website that he will not think of adjusting the draft if objections are raised in the CSAT.

“The CSAT opinion is consultative, it is not an obligation, and it must be consensus within the CSAT. Even if there is no consensus after tomorrow’s meeting, it does not mean that the opinion is mandatory. What we have posted today on the website of the Ministry of Finance – this is the version we present tomorrow in the CSAT, for which we bring arguments in support to each structure. We will see if there are other counter-arguments or presentations in the CSAT from the other structures, but we maintain this version, nothing else. ”

On Monday, the Minister also outlined a brief explanation of the cuts made: “If we cut about RON 150-170 million in total, this money goes where it is needed; we are talking about pensions, salaries, swine fever, other needs that the budget has.”

Who attended the CSAT meeting

The Transport Ministry, as the Intermediate Body in Transport, approved the financing request for the project "Construction of Sibiu - Pitesti highway", Sections 1, 4… END_OF_DOCUMENT_TOKEN_TO_BE_REPLACED

Lack of trust in authorities, corruption and low living standards are the main reasons why young people leave Romania. The data is part of a… END_OF_DOCUMENT_TOKEN_TO_BE_REPLACED

Romania is the EU country with the fewest cars in terms of the number of inhabitants, according to data recently published by Eurostat. We appear… END_OF_DOCUMENT_TOKEN_TO_BE_REPLACED

The Government is preparing the public for the first measures aimed at avoiding the budget slippage, which would be applied by the PSD-ALDE government. News… END_OF_DOCUMENT_TOKEN_TO_BE_REPLACED

French Prosecutor Jean-Francois Bohnert will be appointed as head of the European Financial Prosecutor's Office, a position for which he was heard on Thursday, 11… END_OF_DOCUMENT_TOKEN_TO_BE_REPLACED

Romania recorded the highest road deaths in the EU also last year, with 96 deaths per one million inhabitants in 2018, almost double the EU… END_OF_DOCUMENT_TOKEN_TO_BE_REPLACED

Sorina Pintea announced on Thursday further new changes that will be brought to the functioning of the health care system, including new rules for employment… END_OF_DOCUMENT_TOKEN_TO_BE_REPLACED

The new order on approval and selection procedures for insolvency practitioners is an important step to a very good direction, industry experts say. ANAF is… END_OF_DOCUMENT_TOKEN_TO_BE_REPLACED

Romania lost to Estonia in the final vote to get the non-permanent member position within the UN Security Council for the period 2020-2021. On Friday,… END_OF_DOCUMENT_TOKEN_TO_BE_REPLACED

eMAG hopes to get the opinion of the Hungarian Competition Council over the next two months for the acquisition of Extreme Digital, the market leader… END_OF_DOCUMENT_TOKEN_TO_BE_REPLACED