Romania imported an amount of electricity of almost 796 GWh in the first month of this year, by more than 36% above what it exported… END_OF_DOCUMENT_TOKEN_TO_BE_REPLACED

GFG Alliance has committed to invest one billion euros to upgrade Galati steel plant in order to reduce emissions and increase production. Another EUR 1… END_OF_DOCUMENT_TOKEN_TO_BE_REPLACED

The transition to a green economy needs to be supported by new, additional European funds, distinct from Romania’s allocations from the future EU multiannual budget.… END_OF_DOCUMENT_TOKEN_TO_BE_REPLACED

Romania fell 3 places to the 10th position in the ranking of largest investments made by the European Bank for Reconstruction and Development (EBRD), after… END_OF_DOCUMENT_TOKEN_TO_BE_REPLACED

The Transport Ministry, as the Intermediate Body in Transport, approved the financing request for the project “Construction of Sibiu – Pitesti highway”, Sections 1, 4… END_OF_DOCUMENT_TOKEN_TO_BE_REPLACED 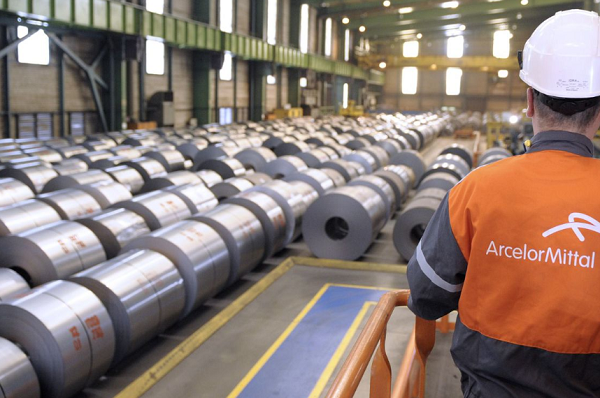 The European Commission has approved on Monday the acquisition of Italian company Ilva by ArcelorMittal. The decision is conditional on the disposal of several assets owned by Arcelor in Europe to preserve the competition on the EU steel market, the Commission announced.

Galati plant is on the list of assets that ArcelorMittal pledged to sell, which is primarily a concern for the employees, as well as for Romanian decision makers.

Government sources stated for cursdeguvernare.ro that Vice Prime Minister Viorel Stefan was appointed as “project manager” in this file, having the “task” to follow the evolution of the sale negotiations of this asset.

The same sources state that it is very likely for the Government to also requests a discussion in the CSAT on this subject.

The delicate issue is given by the fact that the Romanian state has few arguments to intervene in the transactions carried out within the private business environment.

The “safety net” is still at Brussels, as the Commission is going to be the one that also approves the transaction that interests Romania.

The President of the Competition Council, Bogdan Chiritoiu, is confident that European Commission’s interest is the same as Romania’s: “Sidex to keep functioning well”.

“The European Commission is interested in Sidex continuing to be viable so that to generate competitive pressure. In this context, the Commission has set conditions for ArcelorMittal to find a buyer capable to increase the production capacity at Sidex in the coming years,” says Bogdan Chiritoiu for cursdeguvernare.ro.

The head of the Competition Council also says that “the Commission is also aware that there are some national pressures” on Sidex.

Bogdan Chiritoiu also said: “The Romanian Government has the necessary levers to get involved in completing this transaction.”

Regarding Galati plant, there is a special condition that ArcelorMittal has assumed before the European Commission – to provide financing for stimulating the development of production by the new buyer.

The Commission also announced that, in the case of all factories to be disposed of by Mittal, it will make sure the buyer companies have the capacity (expertise, financial resources, etc.) and the motivation to continue to operate and develop the activity of the acquired production units.

Assets will be sold to one or more producers that will continue to operate and develop these factories so that they can effectively compete with ArcelorMittal.

Selling a factory to a buyer that would plan a later closure is not an acceptable solution, the Commission said in a statement released on Monday.

The approval had been granted after the in-depth analysis of over 800,000 documents and considering the feedback received from over 200 customers potentially affected by this takeover.

ArcelorMittal is the largest steel producer in the world, and Ilva is one of the most important companies in the EU.

Steel production is a key industry across the EU: 360,000 people are employed in this sector, working in over 500 factories in 23 member states.

Commission will oversee the sale of ArcelorMittal’s assets

The press release contains the following steps that will follow this agreement:

According to the Commission’s press release:

The Commission has found that the assets that Mittal intends to sell are viable and would allow a buyer/buyers to compete effectively and in long-term with the entity resulting from the takeover approved.

In addition, the assets to be sold are from the entire chain from steel production capacities to distribution assets.

What ArcelorMittal Galati means for Romania

The former Sidex Galati was privatized in November 2001, with the Indians buying it with USD 70 million and investment commitments of USD 350 million.

The relationship between the Romanian state and the new employer was not always smooth – many governments accused investors of failing to observe post-privatization plans.

The matter was also the subject of a litigation open in Paris, a dispute that ultimately did not give satisfaction to the Romanian state on the consideration that, indeed, not all commitments have been fulfilled, but total investment target has been exceeded.

In 2016, the plant had just over 6,000 employees, is the largest employer in the county, with almost 10% of the workforce in the city.

The impact of the company is much higher considering the horizontal or complementary industries supported in the county.

Romania imported an amount of electricity of almost 796 GWh in the first month of this year, by more than 36% above what it exported… END_OF_DOCUMENT_TOKEN_TO_BE_REPLACED

GFG Alliance has committed to invest one billion euros to upgrade Galati steel plant in order to reduce emissions and increase production. Another EUR 1… END_OF_DOCUMENT_TOKEN_TO_BE_REPLACED

The Transport Ministry, as the Intermediate Body in Transport, approved the financing request for the project "Construction of Sibiu - Pitesti highway", Sections 1, 4… END_OF_DOCUMENT_TOKEN_TO_BE_REPLACED

Lack of trust in authorities, corruption and low living standards are the main reasons why young people leave Romania. The data is part of a… END_OF_DOCUMENT_TOKEN_TO_BE_REPLACED

Romania is the EU country with the fewest cars in terms of the number of inhabitants, according to data recently published by Eurostat. We appear… END_OF_DOCUMENT_TOKEN_TO_BE_REPLACED

The Government is preparing the public for the first measures aimed at avoiding the budget slippage, which would be applied by the PSD-ALDE government. News… END_OF_DOCUMENT_TOKEN_TO_BE_REPLACED

French Prosecutor Jean-Francois Bohnert will be appointed as head of the European Financial Prosecutor's Office, a position for which he was heard on Thursday, 11… END_OF_DOCUMENT_TOKEN_TO_BE_REPLACED

Romania recorded the highest road deaths in the EU also last year, with 96 deaths per one million inhabitants in 2018, almost double the EU… END_OF_DOCUMENT_TOKEN_TO_BE_REPLACED

Sorina Pintea announced on Thursday further new changes that will be brought to the functioning of the health care system, including new rules for employment… END_OF_DOCUMENT_TOKEN_TO_BE_REPLACED

The new order on approval and selection procedures for insolvency practitioners is an important step to a very good direction, industry experts say. ANAF is… END_OF_DOCUMENT_TOKEN_TO_BE_REPLACED

Romania lost to Estonia in the final vote to get the non-permanent member position within the UN Security Council for the period 2020-2021. On Friday,… END_OF_DOCUMENT_TOKEN_TO_BE_REPLACED

eMAG hopes to get the opinion of the Hungarian Competition Council over the next two months for the acquisition of Extreme Digital, the market leader… END_OF_DOCUMENT_TOKEN_TO_BE_REPLACED