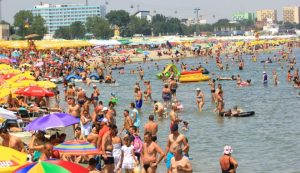 On the other hand, the poor infrastructure and the quality of services below the international standards place Romania on the last position in the ranking by the tourism revenues share in GDP, according to a KeysFin analysis, published on Tuesday.

At the same time, the already historic systemic deficiencies of the Romanian tourism maintain the development of this field below the potential.

While the tourism in Malta, Cyprus and Croatia accounts for more than 12% of GDP, Romania is positioned at the other end of the ranking, with only 1% of GDP. The European average is close to 5%. 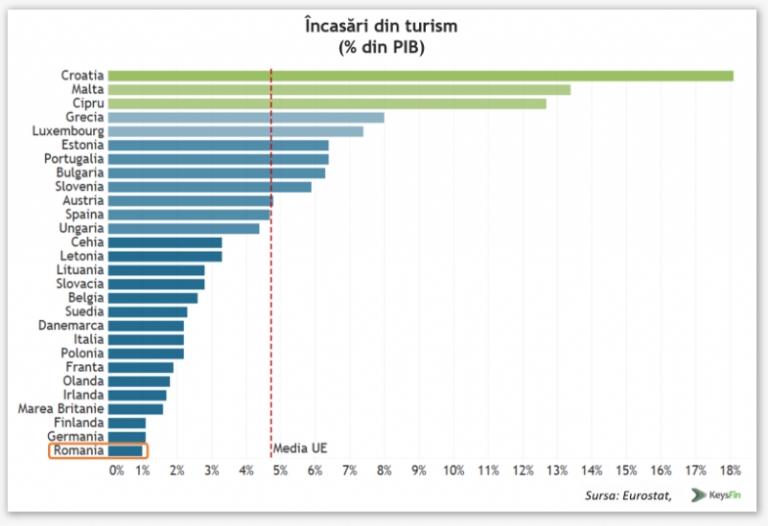 „Bulgaria is the best example of efficient exploitation of tourism. This sector covers 5% of GDP, despite the potential of their tourism below Romania. Our neighbours from the South of Danube have been able to better attract investments, especially the foreign ones, and better capitalize on the geopolitical crisis in Turkey and Greece,” KeysFin experts said.

KeysFin does no longer repeat one of the main causes of Romania’s failure to capitalize on its tourism potential: the type of privatization based on the fragmentation of assets in our country, while Bulgarians have sold integrated assets and service packages.

The analysis reveals though that „the business in tourism is considered by many investors to be extremely volatile” and „investments in this field is considered to have a high degree of uncertainty,” KeysFin notes.

„It is relevant the advance of the operating profit (of HORECA companies from the seaside), which increased from 71.6 million lei (in 2012 up) to 250.8 million lei in 2016„, according to the KeysFin analysis.

Analysts believe that this trend came from the fact that „more and more tourists have considered the seaside resorts as an increasingly attractive destination, due to the significant investments made in the accommodation and dining facilities, from hotels and hostels to restaurants and bars”. 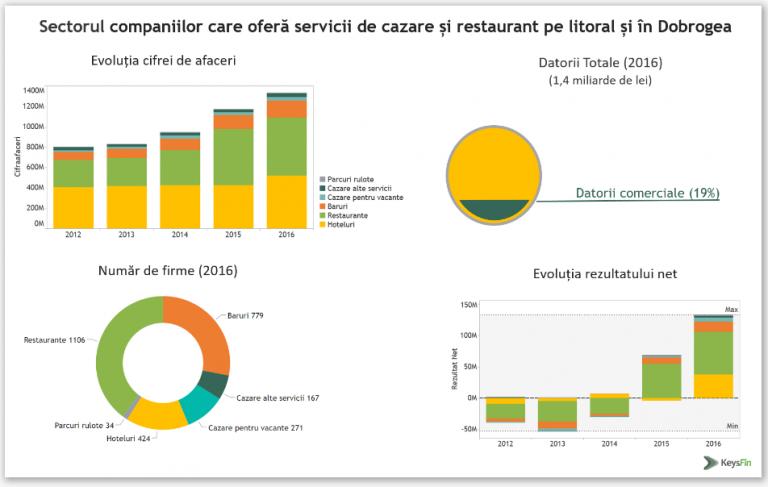 The completion of the A2 motorway but also the economic crisis in Greece and the terrorism problems in Turkey have „influenced significantly the Romanian tourists’ decisions to spend summer holidays in the country, at the seaside.”

The number of tourists registered in the certified accommodation units (excluding those accommodated in individual houses and other unauthorised units) exceeded 1.23 million last year, by more than 200,000 above 2015.

„According to the employer associations’ estimates, the number of tourists in 2017 could exceed 1.5 million. Most accommodation units reported full booking at the seasonal peak. Increased household incomes, improved accommodation conditions, payment facilities, all these conditions are met so that 2017 would most likely be the best year for the Romanian tourism in the last 10 years,” said KeysFin analysts.

As a result, the debts with a maturity of less than one year (of the tourism companies) increased by only 7.9% to 648.4 million lei, even though they maintained in the last five years at a relatively constant level of 1.4 billion lei, according to the KeysFin data.

The analysis sees „positive signals” in these dynamics, as the decrease of receivables by 100 million lei, down to 200 million lei, which means that things were much worse.

„The opening of new 5-star units at the seaside is a step forward, but we still have problems with the road, air and rail traffic to the resorts, with the quality of accommodation and dining services, and especially the professionalism of the employees in the sector„, KeysFin experts say.

KeysFin’s statistics about the growth of businesses from the seaside implicitly emphasize the potential of tourism which speculated the relatively low appetite for Greece and Turkey, yet underutilized from a strategic point of view.

On the other hand, the good business results of the last two years registered at the seaside are also a result of the tax incentives: a 9% VAT cut for hotels and restaurants and the Law on the tax specific for some activities, which favours the HORECA big players.

These facilities seem to have made no significant progress, since Romania lost two positions in the world ranking of tourism competitiveness made by the World Economic Forum, down to the 68th position of 136.

„The planning for the tourism development in Romania is fragmented and not coordinated” was one of the findings from a draft Master Plan for the development of the national tourism, prepared in 2007 for the following 20 years.

The document has been drafted following the conclusion of a contract with the World Tourism Organization (UNWTO), which has not been approved yet by the Government, although assumed by representatives of the Romanian institutions.

„With fragmented forms of ownership and without a clear strategic direction, the seaside resorts can hardly respond to the changing markets and therefore have suffered,” was another conclusion, which is no longer found in the final document posted on the website of the Ministry of Tourism.

The lack of an official vision for the development of tourism has materialized since the 1990s, by encouraging the fragmentation of property by privatisation, while Bulgaria chose to offer integrating companies to foreign investors.

The situation has not improved significantly either after half of the period covered by the document passed, a document which had to be updated by 1st of July, 2017, after 1,040 projects submitted by county councils, the Territorial Administrative Units (ATUs) overall, which oversee national interest resorts or resorts of local interest, according to a statement made in April by the Minister of Tourism at that moment, Mircea Titus Dobre, at a „national conference of the hospitality industry”.

Here are the weak points of Romania as a tourist destination, highlighted during the process of drafting the Master Plan, ten years ago:

There is no official report, if any, available on the current situation, other than the one that can be implicitly estimated based on the current master plan, which has not been updated and translated into a government decision.

It was not until March 2017 that the Government established a „mini-government” for the development of tourism and the implementation of the master plan in the field. The Inter-Ministerial Committee for Tourism (CIT) was to coordinate the public policies and actions „with the impact on tourism at national level, the monitorisation of the sectoral developments”, based on some strategic directions, „accompanied by a medium to long-term action plan for improving the potential in tourism”.

Meanwhile, the majority coalition has changed its government and the CIT has not been a priority any longer.

The systemic deficiencies of the Romanian tourism are currently perpetuated because of the divergences between the fragmented interests of the private sector and those of the local administration, in the absence of an active integrating vision at the national level, both at in terms of investments and the management of the existing potential.