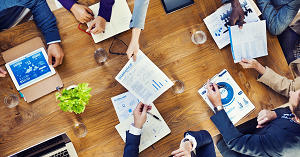 Business people look with a temperate optimism and even with some signs of concern the real economic development of the real economy this year. Inflation, depreciation of the Romanian leu and uncertainties related to the fiscal framework are the main signals indicated by the business environment in the eighth edition of the six-month barometer on the perspectives of the economy.

According to the KeysFin Barometer, over 150 business people from various fields of activity, from trade to financial services, agriculture, energy, clothing, IT, etc., the Romanian economy will continue to grow in 2018, but the trend will significantly slow down compared to 2017.

54% of managers surveyed by KeysFin have estimated the GDP growth between 4-4.5%, 23% have indicated an economic advance above 5%, while 7% believe that GDP will increase by less than 4%.

16% of business people surveyed by KeysFin have avoided answering, as they consider that there are currently too many uncertainties about the economy, especially in the second half of the year.

Compared to the opinion barometer of June 2017, KeysFin’s experts note the rise in the uncertainty about the outlook on the economy and the decline in business people’s optimism. 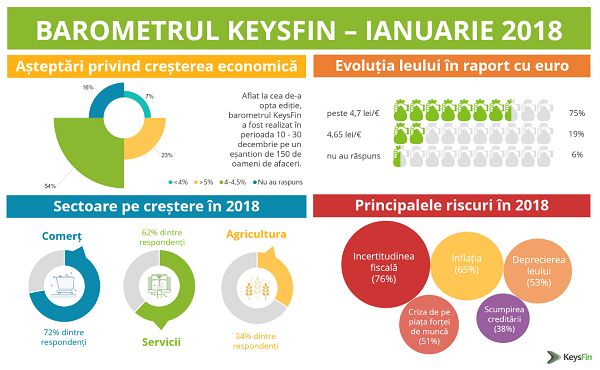 „The Tax Code represents the main concern of the business environment. The significant changes in the last part of last year and perspectives for new changes in this area raise the biggest questions. In the context of an unstable fiscal framework, many business people have postponed their investment plans, for expanding their businesses, especially that the fiscal challenges are accompanied by the perspective of a significant increase in costs of lending in Romania,” explained KeysFin analysts.

The uncertainties related to the Tax Code are therefore at the top of the risks for the economy, as identified by more than 76% of the respondents. Inflation (65%), Romanian leu evolution (53%), labor market crisis (51%) and increase in costs of lending (38%) were also mentioned on the list of the main risks to the economy.

Investors also mentioned among the risks to the economy, the „noise” on the political scene and a possible worsening of the world economic situation.

Trade, main engine of the economy

Positive economic evolution in the first half of the year is expected to be primarily driven by consumption. When asked what fields will have the best evolution this year, in their opinion, 72% of the business people mentioned the trade.

„Wage and pension increases will have a significant impact on this segment, but not as much as in 2017, given the price increases that producers and traders estimate against the background of the domestic currency depreciation,” reads KeysFin’s barometer data.

In the context of a rising consumption, a large proportion of business people (62%) expect for services to also register a consistent advance. In the top best performing fields of activity in 2018, 34% of those who expressed their opinions mentioned agriculture, and 31% indicated the construction field. 29% of investors have mentioned tourism, 17% have indicated the transport and 12% IT.

What happens with Romanian leu in 2018

The inflationary wave of 2018 will be largely influenced by the evolution of the national currency. When asked about the expected rate they see for euro in the first semester, most investors have indicated the range of 4.7-4.75 lei.

After the barometer of June 2017, when over 69% of investors saw the national currency above the 4.6 lei/euro threshold, which has been confirmed, now more than 75% see the euro above 4.7 lei, starting the spring of this year.

19% of investors surveyed by Keysfin see the euro around 4.65 lei and 6% have avoided making any estimation, as they consider forecasts are difficult given the unpredictable trend of the exchange rate.

Investors, on the other hand, consider that expectations of a rising inflation above estimates and the increase in deficits could make BNR continue to tighten the monetary policy this year.

The National Bank has already taken the first step. The key interest rate rose recently to 2%. 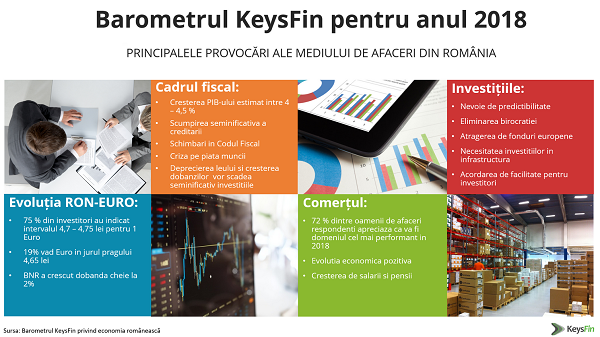 „Beyond the Romanian leu’s evolution, a more difficult access to loans as a result of increasing interest rates could significantly influence the dynamics of the economy, with effects difficult to anticipate now. Many investors believe that the depreciation of the domestic currency and rising interest rates will significantly lower the investment appetite in 2018. We shall have a year full of uncertainties, „said Keysfin.

Another standard question in the Keysfin barometer was about the measures that business people would consider important for the economy to continue its positive evolution in 2018.

Most investors talked about predictability, insisting on the existence of a stable fiscal framework.

Business people also pointed out in their responses for KeysFin the need for infrastructure investments, seen as essential for developing the investment, especially Greenfield ones.

Attracting more European funds, eliminating bureaucracy, and granting incentives to investors interested in developing businesses with a horizontal impact, which would create jobs, were also among the measures proposed by investors.

„The amplification of investors’ aversion to Romania due to increased uncertainties related to government policies must be at the forefront of authorities’ attention,” said KeysFin.

The KeysFin barometer on the Romanian economy was conducted between December 10-30, 2017, on a representative sample of 150 companies from various fields of activity, from the trade sector, to financial services, agriculture, energy, clothing, IT, etc.