The intergovernmental agreement between the United States and Romania in the nuclear-civil cooperation field has received the European Commission’s approval, and Romania will start construction… END_OF_DOCUMENT_TOKEN_TO_BE_REPLACED

A system which can save Romania from the packages waste and, at the same time, can ensure fulfillment of obligations in the field towards the… END_OF_DOCUMENT_TOKEN_TO_BE_REPLACED

Romanian Leu was much more stable during the pandemic than the currencies of Central European countries with a similar exchange rate regime, the Czech Republic,… END_OF_DOCUMENT_TOKEN_TO_BE_REPLACED

How does Romania stand with taxation compared to other EU countries – and where it is with related revenues? 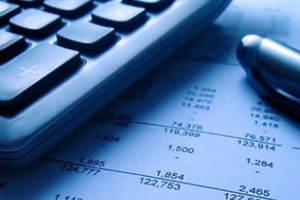 Authorities have borrowed EUR 3 billion from foreign markets yesterday to finance the current year’s deficit. Much: both for one day and in general. A thing that should make us think about how revenues are made in our society.

Of course, we first look at taxation and we make that by comparison in terms of what other people are heading to and where we are going.

Data published by Eurostat show that Romania was in the period 2014-2017 precisely contrary to developments in countries from the same region and EU member.

Unlike the situation in Bulgaria, Hungary, Poland, the Czech Republic or Slovakia, the share represented by tax revenues and social contributions in the budget has decreased and the percentage increase in the amounts available to the state from these sources (about 90% of total public revenues) had the lowest increase, despite the fact that we had the highest economic growth and recovered the most from the gap with the West.

Moreover, the increase in wages from the public sector and pensions was the highest in the region, which led to a budget deficit placed at the 3% threshold set as a Maastricht criterion for joining the Eurozone, for recession situations and not a steady economic growth with values well above the European average.

Even our EU accession wave colleague Bulgaria, placed at only 49% of the EU average in terms of GDP per capita at the standard purchasing power parity (compared to our 63%) has considerably increased the state’s ability to supports its obligations. Our neighbours’ revenues based on the taxation applied have been increasing by more than 25% (value in euro) in just four years. 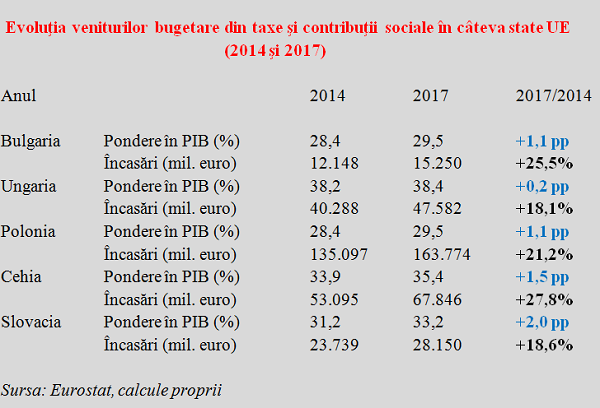 It is thus enough to look at the values recorded in all of these countries and the general trend in the EU (where the increase was slightly more stabilized, from 39.8% of GDP in 2014 to 40.2% of GDP in 2017, based on the fact that a level of 41.2% has been maintained within the Eurozone, which is the centre of gravity of the Union).

After 20 years: we and others

Incidentally, as a coincidence that should give us food for thought, we are in terms of the revenue share of GDP almost exactly where we are in terms of GDP/capita adjusted to the purchasing power, that is to say about 62%. Perhaps, in view of adopting the euro, we should broaden the convergence criteria we are observing.

For example, based on a similarity with the social purpose and budget sustainability, what you would say to consider the increase in the share of taxes and social contributions to at least 70%, 75% or a desirable 80% of the Eurozone average not only in terms of GDP per capita but also of budget revenues.

Translated into figures, there would be a minimum of almost 29% of GDP, that is no more than Poland or Bulgaria already have, a reference of 31% to Slovakia five years ago (interestingly, we would also have five years to go according to the already announced intention of adopting the euro) or 33%, where the Czech Republic already was in 2014 and where Slovakia reached in 2017.

Money neither from taxes nor EU funds

If we look at the statistical series published by Eurostat since 1995, we can see that similar values of the share of tax revenues and social contributions (and the lowest ones registered during the observation period based on European criteria) are found at an interval of 20 years, between 1996-1997 and 2016 -2017.

There is, though, a major difference between the two pairs of values. The first one was on an increasing trend against the backdrop of the crisis started in 1997 that affected the economic result, while the second one reflects a percentage decline, in the context of robust GDP growth.

The question is why we have not maintained the revenue share of GDP to co-finance public investment based in European non-reimbursable funds.

If we had been to remain at 2015 level (28% of GDP, namely 2.2 percentage points in addition compared to 2017), with the same expenditure from public budgets, we would have maintained the deficit of 0.8 percentage points attained then (a big achievement from the perspective of financial stability commitments) or we would have used the extra deficit for infrastructure works.

All in all, we can neither reinvent the wheel nor the hot water.

The same as we cannot be able to change the elementary arithmetic of the budget. That is why we cannot go forward to new progress and civilization heights of the multilaterally developed capitalist society with macroeconomic parameters registered two decades ago.

Luca de Meo (foto), the new general manager (CEO) of Renault group, considers that Dacia project proved to be a miracle and that no one… END_OF_DOCUMENT_TOKEN_TO_BE_REPLACED

A former Soviet airbase in central Romania could become a hub for US Air Force operations in south-eastern Europe, where the Pentagon is seeking to… END_OF_DOCUMENT_TOKEN_TO_BE_REPLACED

Nuclearelectrica's Board of Directors has been mandated to initiate proceedings to terminate negotiations with China General Nuclear Power Group (CGN), as well as legal effects… END_OF_DOCUMENT_TOKEN_TO_BE_REPLACED

Romania imported an amount of electricity of almost 796 GWh in the first month of this year, by more than 36% above what it exported… END_OF_DOCUMENT_TOKEN_TO_BE_REPLACED

GFG Alliance has committed to invest one billion euros to upgrade Galati steel plant in order to reduce emissions and increase production. Another EUR 1… END_OF_DOCUMENT_TOKEN_TO_BE_REPLACED

The Transport Ministry, as the Intermediate Body in Transport, approved the financing request for the project "Construction of Sibiu - Pitesti highway", Sections 1, 4… END_OF_DOCUMENT_TOKEN_TO_BE_REPLACED

Lack of trust in authorities, corruption and low living standards are the main reasons why young people leave Romania. The data is part of a… END_OF_DOCUMENT_TOKEN_TO_BE_REPLACED

Romania is the EU country with the fewest cars in terms of the number of inhabitants, according to data recently published by Eurostat. We appear… END_OF_DOCUMENT_TOKEN_TO_BE_REPLACED

The Government is preparing the public for the first measures aimed at avoiding the budget slippage, which would be applied by the PSD-ALDE government. News… END_OF_DOCUMENT_TOKEN_TO_BE_REPLACED

French Prosecutor Jean-Francois Bohnert will be appointed as head of the European Financial Prosecutor's Office, a position for which he was heard on Thursday, 11… END_OF_DOCUMENT_TOKEN_TO_BE_REPLACED

Romania recorded the highest road deaths in the EU also last year, with 96 deaths per one million inhabitants in 2018, almost double the EU… END_OF_DOCUMENT_TOKEN_TO_BE_REPLACED

Sorina Pintea announced on Thursday further new changes that will be brought to the functioning of the health care system, including new rules for employment… END_OF_DOCUMENT_TOKEN_TO_BE_REPLACED

The new order on approval and selection procedures for insolvency practitioners is an important step to a very good direction, industry experts say. ANAF is… END_OF_DOCUMENT_TOKEN_TO_BE_REPLACED