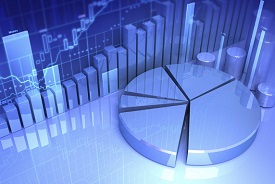 FDI net inflow in 2015 was 3,461 million euro (slightly more than 2% of last year’s GDP), according to a research made by the central bank in collaboration with the National Institute of Statistics (INS). Final FDI stock, as of 31 December 2015, came in at EUR 64,433 million (40% of GDP), out of which about 70% equity of FDI enterprises and 30% total net credit from foreign direct investors.

The amount representing the FDI in 2015 resulted as difference between EUR 3,595 million, equity of FDI enterprises (foreign capital represents at least ten percent) – contribution which includes the reinvested earnings amounted to EUR 510 million – and the net credit of direct investment enterprises from foreign direct investors of EUR -134 million (negative value representing the difference between loan repayments and new credit inflows).

Strictly speaking, foreign funding inflow was EUR 3,085 million, of which investments in new enterprises (greenfield) accounted for only 96 million, representing less than three percent of the total, which indicates the relatively low interest of foreign investors to develop new businesses in Romania.

Notably, the amounts from mergers and acquisitions had a negative contribution of 5 million to the end result. The most significant amount represented the development of existing enterprises (EUR 1,742 million, about a half of the net inflow), while the rest of EUR 1,252 million represented the company restructuring.

Structure by country of origin: from countries to offshores

Three countries (the Netherlands, Austria and Germany) concentrate more than a half of the foreign investments, if we go by the officially declared residence of the foreign capital.

However, the real origin is significantly different, which is obvious in ranking countries like Cyprus and Luxembourg the fourth, respectively the seventh, while the US only ranks the tenth and Britain just the 13th. 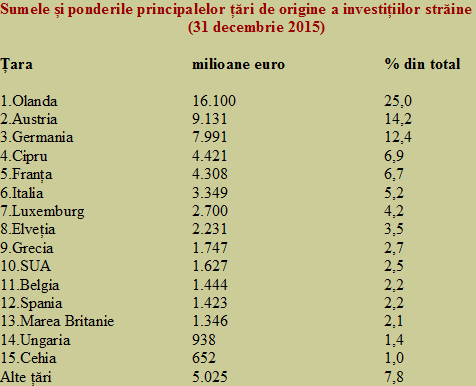 Also important to note the rather weak positioning of the second and third Romania’s foreign trade partners, namely France and Italy, which ranks here the 5th, respectively the 6th; as well as the presence above the 1 percent threshold of our Eastern bloc colleagues Hungary and the Czech Republic, which also needed foreign investments but that did not prevent them from capitalizing on opportunities abroad.

In the allocation of foreign investments by region, the Bucharest region concentrated about 60% of the amounts accounted for as FDI.

This region was followed at a great distance exactly by the most developed regions of Romania, while Oltenia and Moldova ended up at the bottom of the list of attractively for the foreign capital. This result deepened the development imbalances and the gaps between regions to a ratio of almost 4 to 1 (Bucharest-Ilfov with 131% of the EU average, as compared to the North-East with 34%).

Contrary to daily stereotypes publicly circulated and the visual impression, FDI was primarily channelled to the industry, with 44.6% of the total amount invested by foreigners in Romania, out of which the largest recipient was the manufacturing industry (over 20 billion or 31.8% of total). The second largest recipients were the banks and insurance companies and only the third, almost on par, the trade, next to construction.

It is noted in the manufacturing industry category a difference between similar FDI amounts for the petrochemical sector, which fuels almost entirely Romania’s trade deficit, and the transport industry, which on the contrary stimulated the growth of medium and high-tech products’ share and contributed an essential sectoral surplus to balancing the trade balance. 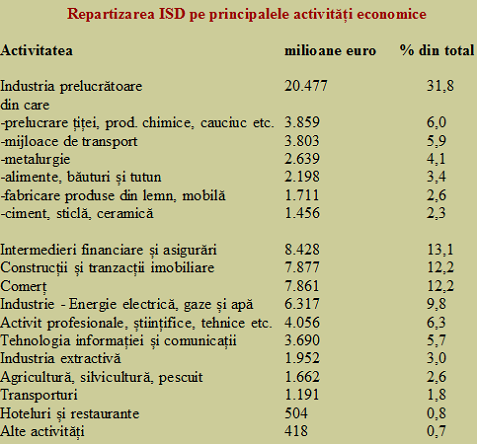 Although it has almost gone unnoticed, the extremely low share of FDI in the hotels and restaurants segment affected the development of an economic sector far below the natural potential and the accommodation capacity available in Romania. The same applies to agriculture, which has a huge potential for productivity increase, key factor for improving competitiveness at national level.

Altogether, FDI level was rather low compared to the size of the economy, with an average of less than two percent of GDP per year. As compared to the payment of obligations on the public debt that almost reached to the threshold of 40% of GDP (another interesting coincidence, in the light of the results of a quarter century of capitalist economy).