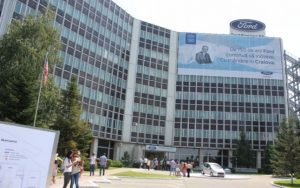 Ford officially launched the production of the EcoSport SUV at the plant in Craiova, raising total investments in Romania to about EUR 1.2 billion, since the takeover of the factory in 2008.

Ford plant in Craiova will be the only supplier of the new EcoSport model in Europe.

So far, Ford produced the B-Max model in Craiova, „one of the most complex cars in the world,” according to John Oldham, Chairman of Ford Romania, and the Transit Connect model until 2012. Ford will continue to produce in Craiova the 1.0 litre Ecoboost engine, which equips one in five Ford cars in Europe, and promises to launch a new model.

Ford Romania’s turnover has been relatively stagnating for four years, down 1% to RON 3,71 billion last year. Net profit was RON 29 million (EUR 6.5 million) after losses of RON 81 million, according to the Ministry of Finance.

Ford Romania has also reported a net profit in other two years since 2008, in 2013 (more than RON 68.8 million, the best year when the turnover exceeded for the first time one billion euros) and in 2014 (over RON 25.3 million).

Ford took over Craiova plant for EUR 57 million when it estimated investments of EUR 675 million. In September 2009, it was to produce the first Ford Transit Connect, 74 years after the US company assembled its first automotive car in Romania in the factory located where Automatica Bucuresti is today.

French Renault carmaker obtained a profit of over RON 456.5 million at Automobile Dacia with a turnover of over RON 20.7 billion last year.

Dacia exports cover about 90% of the production in Automobile Dacia, which accounts for over 7% of the total Romanian exports (FOB).