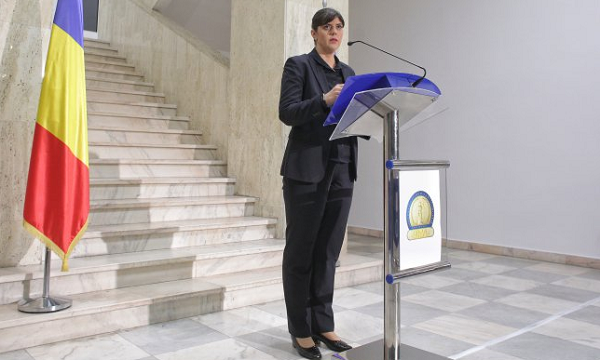 As Romanian authorities raise obstacles in Laura Codruta Kovesi’s rally at the European Prosecutor’s Office (EPPO), European officials and leading EU political leaders, from right-wing to left-wing parties, express their support for her.

Laura Codruta Kovesi is a favorite in the competition for the first EPPO chief prosecutor, a competition in which those who were interested could register without the involvement of national authorities.

After the first part of the selection process, based on the strictly professional evaluation, carried out by a group of reputed personalities in the field, the former Head of DNA ranked first, followed by prosecutors Jean-Francois Bohnert (France) and Andres Ritter (Germany).

Laura Codruta Kovesi enjoys broad support from leaders in Brussels and Strasbourg and some sources even mention possible negotiations taking place between France and Germany to withdraw candidates from their countries so there would be no problems in her appointment to EPPO.

So far, leaders of three major parties in the EP have declared their support:

“To respond very briefly, we clearly support her. We believe the political sector must stay away from the elections of the European prosecutor. So, just thinking about her technical capacity, we support her.”

Frans Timmermans, the leader of the Socialists in the European Parliament, EU Commissioner for Better Regulation, Interinstitutional Relations, the Rule of Law and the Charter of Fundamental Rights:

“I was quite brutal with Romanians in these matters and I shall continue to be clear about this. I believe that in the fight against corruption, in my view, Ms Kovesi has done a great job over the years and is a very good prosecutor.

I can testify that I have seen her doing her job and I think she is an excellent prosecutor. She did a very courageous job in Romania.”

Guy Verhofstadt, leader of ALDE group, urged the EP President to ensure that the procedure continues without the Romanian authorities being able to prevent the participation of Laura Codruta Kovesi:

“So we want to ask you to take an attitude in defending the integrity of the selection process and call on Romanian authorities to guarantee Ms Kovesi that she can participate without any problems at the hearings and appear before the European Parliament.”

The main actor in blocking the Romanian candidate is Justice Minister Tudorel Toader, who obtained her dismissal with CCR’s help.

On February 5, Minister Toader sent to EU Justice Ministers attending the JHA Council a letter explaining why the CCR has decided to immediately dismiss Laura Codruta Kovesi and tried to persuade them that she is not suitable for heading the EPPO.

February 15 – The Section for investigating magistrates for criminal acts has notified Laura Codruta Kovesi that she is suspected in a case in which she is accused of abuse of office, bribery and forgery in statements. The case file has been opened on a complaint made by fugitive Sebastian Ghita, a referral that has also been investigated in 2017 when the case has been dismissed because the acts have not been confirmed.

For now, the Section has not taken any preventive action against Kovesi, but a country exit ban will impede her from attending the hearings at the end of the month.

Also, it is not out of the question that the precipitated evolution of the case, its potential submission to the court, would cause problems to the former head of the DNA, who would not be able to obtain a final verdict before the conclusion of the selection for EPPO.