The Minister of European Investment and Projects, Cristian Ghinea, states that “PNRR is not Santa’s investment list; it is also a list of assumed reforms… END_OF_DOCUMENT_TOKEN_TO_BE_REPLACED

Luca de Meo (foto), the new general manager (CEO) of Renault group, considers that Dacia project proved to be a miracle and that no one… END_OF_DOCUMENT_TOKEN_TO_BE_REPLACED

A former Soviet airbase in central Romania could become a hub for US Air Force operations in south-eastern Europe, where the Pentagon is seeking to… END_OF_DOCUMENT_TOKEN_TO_BE_REPLACED

Nuclearelectrica’s Board of Directors has been mandated to initiate proceedings to terminate negotiations with China General Nuclear Power Group (CGN), as well as legal effects… END_OF_DOCUMENT_TOKEN_TO_BE_REPLACED 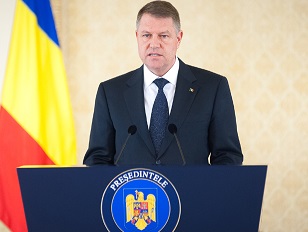 All these actions are intended to discontinue the promulgation procedure for the three laws, pending the Venice Commission response.

Its recommendations are not mandatory, but they will basically have to be respected, otherwise, there is a risk of reactions from Brussels. For example, the mechanism for assessing the rule of law could be triggered, as was the case with Poland.

“With the present format of the package of amendments to these laws, it does not correspond to a democratic state, in the way the Constitution says in Article 1.

I, therefore, decided to send the whole package back to the Constitutional Court and, in parallel, to bring the matter to the Venice Commission.

That is why I appeal to the Constitutional Court not to hurry but work with the European body that has been contributing for almost 30 years to the development of a common constitutional patrimony in Europe and which supports states wishing to align legal and institutional structures to international standards and good practices in the fields of democracy, rule of law and protection of human rights, including by providing urgent constitutional support.

I trust that judges of the Constitutional Court respect their status as guarantors of the supremacy of the Basic Law and defenders of democracy by law, so they will have all the openness towards an approach that aims to ensure the observance in Romania of the principles and values of the European democracy.

Once the Court has expressed its views on these matters, I shall make a new analysis of the laws and decide then whether a revision is necessary“, said Klaus Iohannis

Let us remember how we got here. In the autumn of 2016, there was an electoral campaign for Parliament and PSD played the people with a milk and honey program and won the elections, but something totally different followed. The assault on the judiciary from the PSD started.

Then at the beginning of 2017, they came with that infamous OUG 13. That ordinance we managed to stop it together. Hundreds of thousands of Romanians in good faith protested in the street.

The assault has moved to the Parliament, and the outcome of the parliamentary move to amend the laws on the judiciary has now reached the point of the promulgation of these laws.

The original procedure, the rush without any justification and the authoritarian way in running the parliamentary debates resulted in a great deal of mistrust.

The reform of the judiciary, as called for by PSD, is still being challenged by the professional associations of magistrates and creates great concerns from our foreign partners.

In an authentic democracy, the separation of powers in the state means a constructive collaboration, respect among institutions, balance and mutual control between them. Laws on the judiciary have an important role. They have been adopted within a week. It took four months and three decisions of the Constitutional Court to correct them. Everybody would have won if they were debated in the right way.

I find that the three laws are not fully adequate either to the domestic constitutional framework or to the European standards in the field.

Provisions in the Law on the regulations of judges have been declared unconstitutional on two occasions. Some provisions are still contrary to the Constitution.

The law on the judicial organization has already come to promulgation but it still raises some issues. The new rules on the admission to the magistracy pose a risk of blocking the judiciary system. New structures have been created that could intimidate the magistrates.

Nor is the law on CSM having a happier wording. It establishes a segregation of the guarantor of the independence of the judiciary by a massive transfer from the CSM plenum to the sections, probably based on the “Divide et impera” principle.

The Venice Commission has already been notified on March 26 by the Monitoring Committee of the Parliamentary Assembly of the Council of Europe (PACE), following the request from PNL and the Judges’ Forum.

Initially, the head of state said he would not refer to the Venice Commission, but he has not explained his decision.

After the second constitutional review, two of the three laws on the judiciary have been declared constitutional, and the provisions of Law 303/2004 on the regulations of judges declared unconstitutional will be discussed in the special parliamentary committee led by Florin Iordache, after the Constitutional Court publishes the reasons for this decision.

The two laws that have been declared constitutional are in the promulgation process and there is no possibility of suspending this procedure. According to the Constitution, the head of state is obliged to promulgate a law within 10 days since receiving the Constitutional Court decision, if there was a referral, and the judges of the Court considered it constitutional.

Luca de Meo (foto), the new general manager (CEO) of Renault group, considers that Dacia project proved to be a miracle and that no one… END_OF_DOCUMENT_TOKEN_TO_BE_REPLACED

A former Soviet airbase in central Romania could become a hub for US Air Force operations in south-eastern Europe, where the Pentagon is seeking to… END_OF_DOCUMENT_TOKEN_TO_BE_REPLACED

Nuclearelectrica's Board of Directors has been mandated to initiate proceedings to terminate negotiations with China General Nuclear Power Group (CGN), as well as legal effects… END_OF_DOCUMENT_TOKEN_TO_BE_REPLACED

Romania imported an amount of electricity of almost 796 GWh in the first month of this year, by more than 36% above what it exported… END_OF_DOCUMENT_TOKEN_TO_BE_REPLACED

GFG Alliance has committed to invest one billion euros to upgrade Galati steel plant in order to reduce emissions and increase production. Another EUR 1… END_OF_DOCUMENT_TOKEN_TO_BE_REPLACED

The Transport Ministry, as the Intermediate Body in Transport, approved the financing request for the project "Construction of Sibiu - Pitesti highway", Sections 1, 4… END_OF_DOCUMENT_TOKEN_TO_BE_REPLACED

Lack of trust in authorities, corruption and low living standards are the main reasons why young people leave Romania. The data is part of a… END_OF_DOCUMENT_TOKEN_TO_BE_REPLACED

Romania is the EU country with the fewest cars in terms of the number of inhabitants, according to data recently published by Eurostat. We appear… END_OF_DOCUMENT_TOKEN_TO_BE_REPLACED

The Government is preparing the public for the first measures aimed at avoiding the budget slippage, which would be applied by the PSD-ALDE government. News… END_OF_DOCUMENT_TOKEN_TO_BE_REPLACED

French Prosecutor Jean-Francois Bohnert will be appointed as head of the European Financial Prosecutor's Office, a position for which he was heard on Thursday, 11… END_OF_DOCUMENT_TOKEN_TO_BE_REPLACED

Romania recorded the highest road deaths in the EU also last year, with 96 deaths per one million inhabitants in 2018, almost double the EU… END_OF_DOCUMENT_TOKEN_TO_BE_REPLACED

Sorina Pintea announced on Thursday further new changes that will be brought to the functioning of the health care system, including new rules for employment… END_OF_DOCUMENT_TOKEN_TO_BE_REPLACED

The new order on approval and selection procedures for insolvency practitioners is an important step to a very good direction, industry experts say. ANAF is… END_OF_DOCUMENT_TOKEN_TO_BE_REPLACED