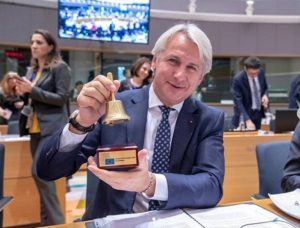 Finance Ministers of the EU voted on Tuesday at the third meeting of the Council for Economic and Financial Affairs (ECOFIN) chaired by Romania, the updated list of tax havens.

The new list tripled (after adding 10 more jurisdictions on Tuesday):

Romanian Minister Eugen Teodorovici, who chaired the ECOFIN meeting, surprised his colleagues by telling to the press, before the meeting, that the adoption of the list is likely to be postponed for May.

Eugen Teodorvici’s statement has created confusion, an EU official explained to Politico.eu, as the Council reached an agreement Monday night when it was decided that a new list would be presented on Tuesday.

Minister Teodorovici, whose proposal for a two-month postponement has been ignored, has become completely isolated, an ECOFIN official told Politico.

According to sources quoted in several foreign publications, there have been talks about the United Arab Emirates (UAE), and Italian Finance Minister Giovanni Tria said that Rome would have liked the UAE to have more time to adopt the legislation needed to meet EU taxation standards.

Asked whether he would abandon the veto right on the inclusion of the United Arab Emirates in the list, the Italian minister said he will take into account other member states’ positions and that the UAE can be quickly excluded from the list when it adopts the required legislation.

Last week, EU member states rejected the European Commission’s proposal that included 23 states and jurisdictions that would not do enough to combat money laundering and terrorist financing.

In response, European Justice Commissioner Vera Jourova has announced that the EU government will review the blacklist on money laundering in a way so that it would ensure member states’ support.

The purpose of this list is to protect the EU financial system by better preventing the risks of money laundering and terrorist financing.

As a result of this listing, banks and other entities subject to EU anti-money laundering rules will have to apply a more in-depth control (due diligence) in relation to financial transactions involving clients and financial institutions from these third-party countries with a high risk in order to better identify suspicious financial flows.